Cape St. Mary's is the most accessible seabird rookery in North America. Bird Rock is the third-largest nesting site and southernmost colony of northern gannets in North America. Cape St. Mary's is also the southernmost breeding area for thick-billed murres in the world and the southernmost major breeding site for common murres in the northwest Atlantic Ocean. The site is overflowing with perching, diving, and scrambling birds from edge to edge – melding together into an awesome moving, breathing spectacle of colour and sound.

Explore the edge of rugged cliffs and spend hours watching the daily lives of some of the world’s most interesting seabirds. The stunning, majestic scenery of the Cape is perfect for a relaxing walk or a challenging hike. Mosses, lichens, low-growing shrubs, and alpine wildflowers blanket the plateau, while nearby Golden Bay is seasonally rich with wild bakeapples. Photograph eiders, eagles, osprey, cormorant, and guillemot against a brilliant glowing horizon.

At the interpretation centre, take a moment to understand the lives of seabirds in the wild and watch them soar from a giant viewing window. Friendly and hospitable staff will guide you through the reserve and answer any questions you may have. The reserve can be visited year round, and the interpretation centre is open from May until October. During the summer visit the Cape St. Mary’s Performance Series, the annual concert series which includes traditional music, dancing, food, drink, and fun!

The Cape is a lovely place to see seabirds, especially northern gannets. However, sometimes the fog makes it difficult to fully appreciate the beauty of the place, so we suggest calling ahead of time (+1 (709) 277 1666). As a rule of thumb, if it’s foggy in St. John’s, it’s usually clear at the Cape, and vice-versa.

Getting to St. Marys

It’s never too early to start planning your visit to Cape St. Mary’s Ecological Reserve. And while late summer and early fall are good times to arrive, it’s in the early summer when this wonderful bird sanctuary really bursts with life. Tens of thousands of migrating seabirds perched almost within arm’s length, whales offshore, possibly an iceberg – and the heart-stopping beauty of a rugged coastline blanketed in a velvet green wash of mist and sunshine.
Continue Reading 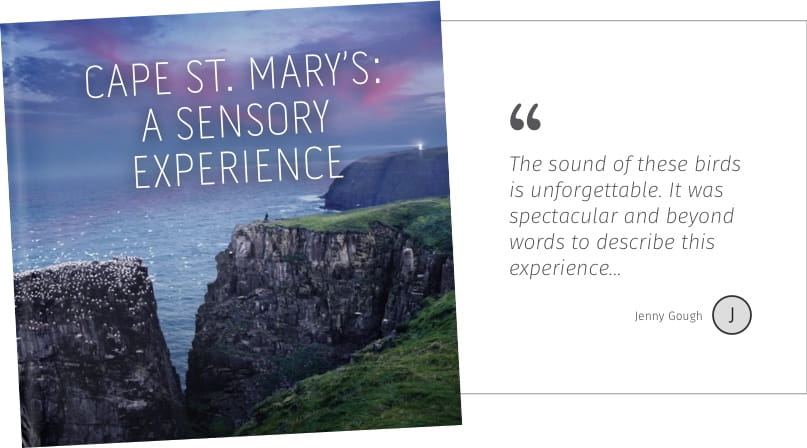