Learn More
When it comes to viewing icebergs, this is one of the best places in the world. During spring and summer, these 10,000-year-old glacial giants are visible from many points along the northern and eastern coasts, especially on clear, sunny days. They come in every shape and size, with colours from snow-white to deepest aquamarine. Despite their arrival from the Arctic every spring, and their disappearance only months later, our awe of them remains new, year after year.

Icebergs are edges of glaciers that have broken off and slipped into the ocean. Roughly 90% of icebergs seen off Newfoundland and Labrador come from the glaciers of western Greenland, while the rest come from glaciers in Canada's Arctic. Their sheer size will amaze you, and that's without seeing the ninety-percent still below the surface of the ocean.

Icebergs are so plentiful around these parts, we actually put them to good use. You can drink it straight, as in Berg water, or in spirits like Iceberg Vodka, Gin, and Rum. Don’t forget the popular Iceberg Beer.

Icebergs are not to be underestimated. In 1912, only 400 miles from our coast, an iceberg like these sank the infamous Titanic.

You’ve probably heard that only 10% of an iceberg is visible above the water’s surface. But did you know that most illustrations we see of icebergs would be totally unstable in real life? Icebergs actually float on their side, instead of vertically. See for yourself!

Draw an iceberg and see how it will float.*

Use your cursor to draw any shape in the box below.

*An iceberg wouldn’t float exactly like this in reality. Its three-dimensional distribution of mass and relative density compared to the water are both significant factors that are only approximated here.

It’s taken them 10,000 years to get here, but you can discover them in just a click with IcebergFinder.com. Sometimes, these frosty giants are spotted from outer space, other times, from a sliver of our 29,000 kilometres of coastline.

These ancient works of art don’t like to stay in one place for too long, so if you’re serious about pinning down their precise location, or would like to learn more, please visit us at the nearest Visitor Information Centre.

Discover Ways to Watch (When the Time is Right)

Iceberg Alley stretches from the coast of Labrador to the southeast coast of the island of Newfoundland. Some of the more popular places from shore, or from tour boats, are (from north to south): St. Lewis, Battle Harbour, Red Bay, Point Amour, St. Anthony, La Scie, Twillingate, Fogo Island, Change Islands, Bonavista, St. John's / Cape Spear, and Bay Bulls / Witless Bay. All of these locations are accessible by road. The first four, which are on the coast of southern Labrador, can be accessed by car ferry from the island of Newfoundland year round. The further north, the longer the iceberg season.

The icebergs come through Iceberg Alley from spring to early summer. As you move north, the season stretches a bit longer. April and May are the months when bergs are most plentiful, but they may be locked up in sea ice, so we suggest late May and early June for best viewing.

The best ways to watch icebergs are by boat tour, kayak, and from land. Many tourism operators around the province offer boat tours designed to show you the icebergs at their best, along with our visiting whales and numerous sea birds. You can also paddle yourself out to have a look, or stand on our amazing coastline and watch them sail by (although they don’t move that quickly).

Icebergs can be unpredictable, which makes them difficult to navigate around safely. When viewing icebergs from the water, it is recommended that you maintain a safe distance (D) – equal to the length of the iceberg (L), or twice its height (H), whichever is greater. Within this perimeter, there is a risk of falling ice, large waves, and submerged hazards. Safety should always be your first priority.

We’re one of the few places in the world to receive simultaneous visits from whales, seabirds, and icebergs. As the whales and birds migrate north and the icebergs sail south, there’s a chance to experience all three of these wonderful sights in one trip. Like so much in nature, there are many factors that vary from year to year, but with luck you’ll witness this exciting spectacle.

Some Of Our Favourite Bergs From Past Seasons. 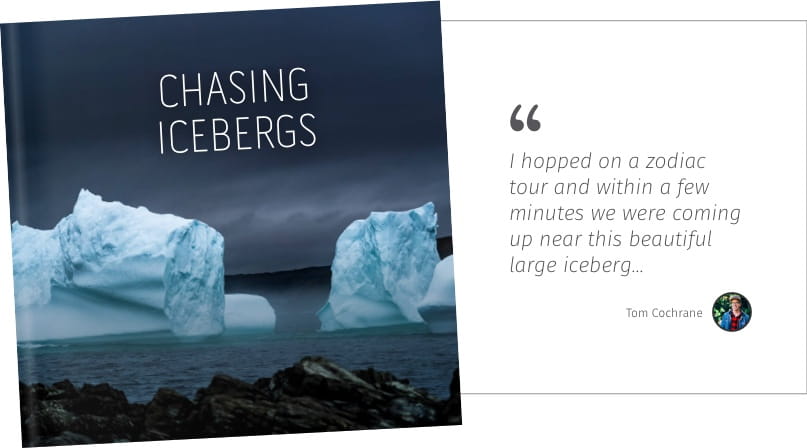