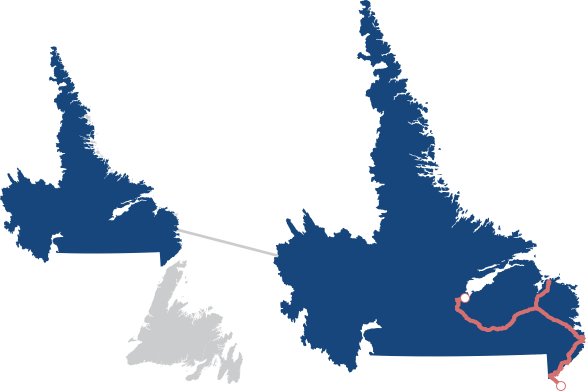 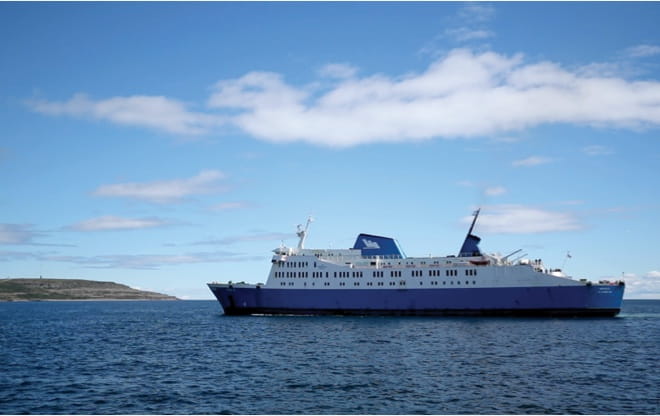 See whales and seabirds from the year-round ferry between St. Barbe and Blanc Sablon.

Take the ferry ride across the Strait of Belle Isle to Blanc Sablon on the Labrador-Québec boundary. The year-round ferry, that takes passengers and a limited number of vehicles, is a great way to see whales and seabirds.

When travelling by Labrador Marine ferry, it's important to plan in advance. Schedules can vary and there are time zone changes. When you board the ferry in St. Barbe, you’re on Newfoundland Time, but once you arrive in Quebec, you’ll find yourself on Atlantic Standard Time. Then, as you drive further east into Labrador, you’ll cross time zones again back into the Newfoundland Time Zone (the communities south of Black Tickle are on Newfoundland Time). 1-866-535-2567 (within Newfoundland and Labrador) 1-709-535-0810 (outside the province) http://www.labradormarine.com. If flying into Quebec, the Blanc Sablon airport schedule operates on Atlantic Standard Time.

Cellphone service is limited on the Trans-Labrador Highway, so before hitting the road, borrow a satellite phone to make sure your scenic drive is a safe one. Click here for a list of locations. 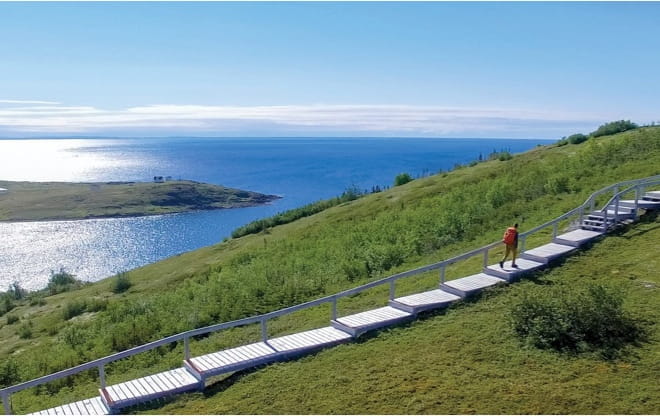 There are hiking trails through the Expedition 51 Road Trip that will take you along the coast, over sand dunes and boardwalks, and to historic landmarks like resettled communities and a UNESCO World Heritage Site.

This area has thousands of years of Indigenous history. French Settlers arrived in L’Anse au Clair in the early 1700s to fish off the coast – today, it remains a picturesque fishing village. The Gateway to Labrador Centre, which is a restored church, has displays on the history and heritage of the area, and information on what to see and do. Just a few steps away, you can take a stroll on a beautiful sandy beach. Nearby, the Jersey Trail leads to an interpretation area on Jerseymen from the Channel Islands who fished here in the 19th century. This trail is also the start of the Labrador Pioneer Footpath that winds north along the coast of the Labrador Straits to Pinware, connecting seven communities over 110 kilometres. Prior to roads, these traditional footpaths were an essential link between communities.

Along the Forteau River during the months of July and August, trout and salmon anglers should be prepared to meet their match on the many pools, steadies, and rattles. If you’re a non-resident, you’ll need to hire a guide.

Climb the tallest lighthouse in Atlantic Canada in Point Amour.

North on the highway is L’Anse Amour National Historic Site, where you will find the oldest known burial mound in North America, dating back 7,500 years ago. Archaeologists have discovered campsites of the Maritime Archaic people along the coast, as well as those of Pre-Inuit and later Indigenous groups.

Point Amour has the tallest lighthouse in Atlantic Canada. Built in 1855, it rises 109 feet to aid navigation through the sometimes-treacherous Strait of Belle Isle between Newfoundland and Labrador. This Provincial Historic Site is a gem. An interpreter will guide you up the steps and ladders to the top for a magnificent view – keep your eyes peeled for icebergs, seabirds, or breaching whales – while the lower-floor displays are both imaginative and informative. Back on solid hike the coastal trail or picnic on the sandy beach. 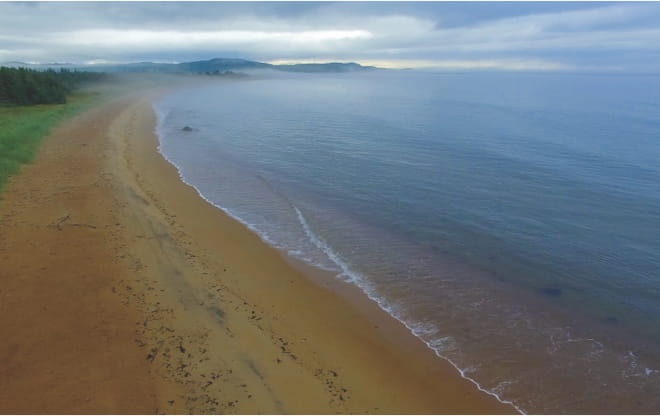 Further along this route is Pinware Provincial Park, known for its beautiful stretch of sandy beach hugging the Strait of Belle Isle. This park is also home to the mighty Pinware River – another popular spot for trout and salmon anglers. Interesting fact: the community of Pinware has the oldest known Indigenous site in the province dates back almost 9,000 years ago.

Red Bay is a UNESCO World Heritage Site and tells the intriguing story of 16th-century Basque whalers. They built the first major industrial complex in the New World here, and hunted whales for rendering into oil to light the lamps of Europe. The Basques left here in the early 1600s and were forgotten until researcher Selma Barkham found their records in Spanish archives. Before the Basque were here, Indigenous groups occupied the land for thousands of years.

On Saddle Island are the remnants of the tryworks and other facilities, a two-minute boat ride away. The remains of 130 men who perished here, and the red roof tiles that covered their dwellings, populate this beautiful, historic landscape. 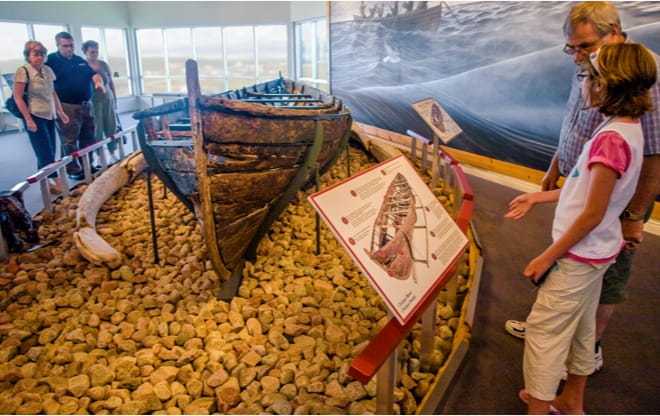 Visit the Red Bay UNESCO World Heritage Site interpretation centre to see the preserved remnants of a chalupa, or shallop, the small boat used by whalers to chase down their quarry.

The interpretation centre contains the preserved remnants of a chalupa, or shallop, the small boat used by whalers to chase down their quarry. During the excavation of the site, underwater archaeologists from Parks Canada found a wreck, believed to be the San Juan, which sank here with a full cargo of oil in 1565. In Mary’s Harbour, catch the ferry to Battle Harbour – a picturesque fishing port established in the 1750s. This unique village is frozen in time, with virtually no signs of modern life, and you can stay in a one-of-a-kind inn. It’s a trip into the past that is truly a restorative experience and begs a two-night stay to be truly appreciated. Tour the late 18th-century buildings and the surrounding area; this National Historic Site and District is the best-preserved traditional fishing village in the province. If it’s a clear evening, look for the incredible northern lights, which are visible in Labrador about 240 nights a year.

Next, consider a side trip to Port Hope Simpson and Cartwright. In Port Hope Simpson, relax in the town or arrange to fish on Shinney's River with local guides. Depending on the time of your visit and water conditions, you may be angling for a feisty sea-run brook trout or the king of the game fish, an Atlantic salmon. You can also visit the ancestral homes and resettled fishing villages of the Labrador coast where you’ll enjoy a fresh mussel harvest and boil up, or you can learn the traditional cold-smoked methods of curing char with Labrador blackberry bush. 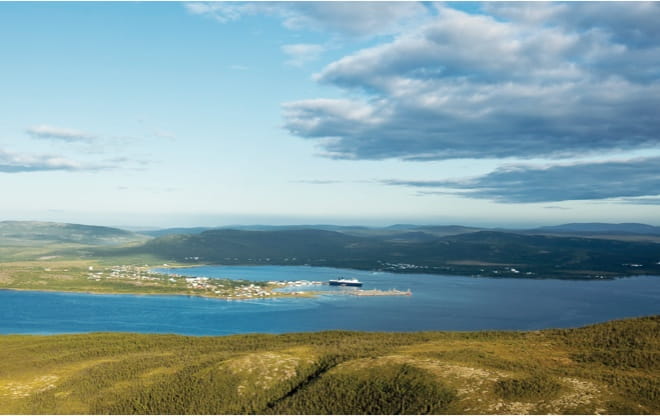 Explore the community of Cartwright, meet the locals and check out Flagstaff Hill.

Upon arrival in Cartwright, meet the locals, explore the community, and check out Flagstaff Hill. Cartwright is on the doorstep of the recently established Akami-Uapishkᵁ-KakKasuak-Mealy Mountains National Park Reserve, the largest national park in eastern Canada at 10,700 square kilometres. While there are currently no visitor offers in the park yet, Parks Canada has opened an office in Cartwright. Drop by, meet the team, and plan your potential future adventures.

The longest leg of this expedition is between Cartwright and Happy Valley-Goose Bay. Allow a half-day for the drive along this mostly paved road.

Please check exact directions and road conditions before you start each road trip. Visit www.511nl.ca for current road conditions and ferry updates. This road trip includes a community(s) accessible by a provincially operated ferry from St. Barbe to Blanc Sablon. Please visit www.tw.gov.nl.ca/ferryservices/schedules for routes and rates. Some ferries do permit vehicles, with a set limit for vehicle capacity; other ferries are passengers only (no vehicles accepted) so plan accordingly. For information on the Battle Harbour ferry, visit https://battleharbour.com.