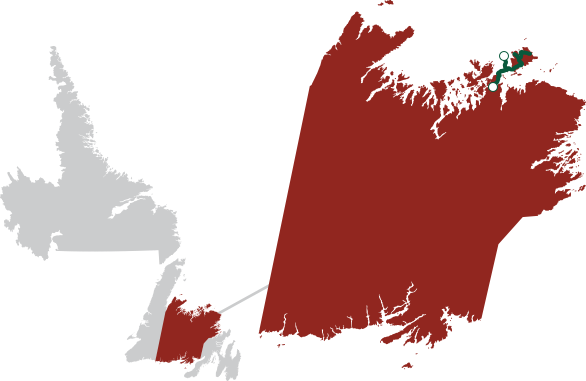 Visit the many homes, stages, and fishing sheds on Change Islands that have been perfectly preserved.

The ferry from Farewell to Change Islands is a short 20-minute journey, and once you’ve made landfall you’ll step back in time to a place where traditional ways still hold sway. The ferry takes passengers and a limited amount of vehicles. Small community charm and rich fishing culture combine with a prominent sense of history to make this place a tourist and artist's paradise.

Change Islands has a way of allowing you to slow down. There are only about 300 people living on this idyllic and historic island. Many of the island’s original homes, stages, and fishing sheds have been perfectly preserved, and serve as endless photography opportunities set against the quiet backdrop of craggy coastline and stunning sunsets. Sometimes you’ll even see an iceberg or two floating by. You’ll also find a Newfoundland pony breeding refuge there, where workers are dedicated to saving this critically endangered animal. It’s not hard to see how this place inspires artists of all backgrounds—just head over to the Forge and Fibre to watch a blacksmith using a traditional coal forge to create custom ironwork. You can also visit the Newfoundland Original Hooked Rugs studio to learn more about rug hooking, knitting, crochet, spinning, and more.

While here, hike the Squid Jiggers Trail. This trail hugs the rugged coastline, with some inland portions and a few steep climbs where sturdy footwear is required. At the Olde Shoppe Museum, peruse the private collection of local artifacts from the early 19th and 20th centuries, including handmade tools and items recovered from WWI and WWII. 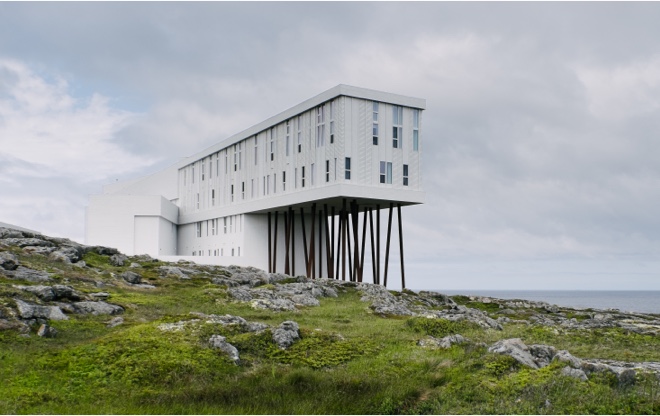 Fogo Island, the largest along Newfoundland and Labrador's vast coastline, is home to eleven settlements, each with its own distinctive flair and allure. Acclaimed artists come from far and wide to work in incredible, modern artist studios. Traditional craft is in abundance here. Some of it is even used at the Fogo Island Inn, a sleek, Nordic-style hotel perched on stilts at the Atlantic Ocean’s edge, serving as an inspiring collaboration between traditional and modern. The inn’s restaurant boasts gourmet cuisine infused with the bounty of the island and their own gardens.

Settled in the 18th century, Tilting is still remarkably Irish in its outlook and cultural ways—the town is a National Historic Site of Canada and is also designated as a Registered Heritage District by the Heritage Foundation of Newfoundland and Labrador. You can wander through the tall, lush grasses and run your fingers over the red paint of old fishing stages, or learn more about this incredible history on a walking tour of Tilting and Oliver’s Cove.

Fogo Island has had to adapt to many changes and modernization over the years. Back in 1967, the residents of Fogo Island had to decide whether or not to leave their island to resettle. Instead, they decided to stay and a find a way to develop a long-term sustainable community. The fishermen formed the Fogo Island Co-operative Society Limited—a community-based enterprise on which they built the island’s economy around the sea and its natural resources. They built more boats, took over abandoned processing facilities, and sought new markets. As you might expect from a place so in touch with its heritage, there’s no shortage of festivals on Fogo Island. Soak up the music at the Brimstone Head Folk Festival and the Etheridge’s Point Seaside Festival, or indulge in the arts at the Fogo Island Partridgeberry Head Festival. 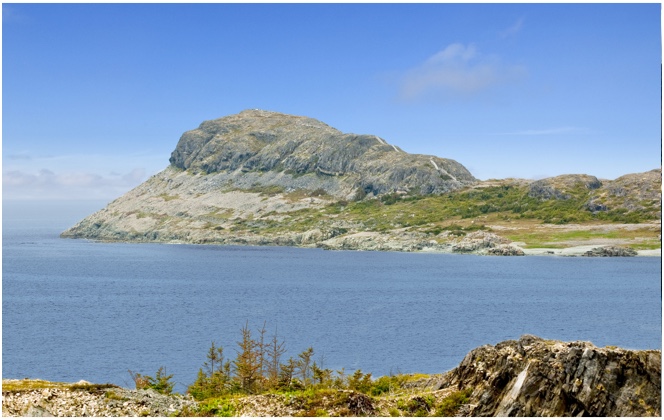 Hike to Brimstone Head one of the Four Corners of the Flat Earth.

Fogo Island’s landscape is just as unique as its culture, and even has its own island-bound caribou herd. Coastal hiking trails will lead you to resettled communities, scenic lookouts, and even one of the Four Corners of the Flat Earth (according to the Flat Earth Society). You can reach the latter on the hike to Brimstone Head. For an easier walk, stroll the Joe Batt’s Point Walking Trail to see the Great Auk statute commemorating the now extinct bird species. These trails also provide ample opportunity to see whales and icebergs—but for a different perspective, try a boat tour.

This road trip includes a community(s) accessible by ferry. Please visit www.tw.gov.nl.ca/ferryservices/schedules for routes and rates. Some ferries do permit vehicles, with a set limit for vehicle capacity; other ferries are passengers only (no vehicles accepted) so plan accordingly.