Four or five years ago, I was cleaning up my parent’s basement in St. John’s when I came across a treasure. It was an old can of pop. Not much to you maybe, but to me it was as if I hit the jackpot. It was yellowed and faded – one of those cans that had the two openings at the top. A big circle for drinking, and a small one for airflow. A miracle in modern engineering if you ask me. And that was just a can of pop. Alright, I’m easily excitable, I admit. But, I can’t imagine the surprise when John Templeton, one of the co-owners of Templeton’s – a locally owned and operated hardware store established in St. John’s in 1863 – came across a set of old paint chips dating back over fifty years.

John and his brother David knew they had to do something with the chips, this was too rare a find to overlook. So they contacted the Heritage Foundation of Newfoundland and Labrador. This somewhat surprising collaboration marked the birth of the Heritage Colours of Newfoundland. The plan was pretty straightforward – these colours needed a name befitting the off-kilter and quirky place they originated from. Lara Maynard, a municipal outreach officer with the Heritage Foundation, was tasked with the job. Lara is no stranger to naming colours; she once entered and won a contest to choose colour names for a Canadian cosmetics company. I guess you could say she’s always had a knack for it. “I wanted to select names that would best celebrate not only the landscape, but our language as well,” said Maynard. With names like ‘Ferryland Downs’, ‘Little Heart’s Ease’, ‘Mussels in the Corner’, and ‘Charmer’ – it’s clear to see that she was successful in her mission. When asked about which colour she loved the most amongst Templeton’s soon-to-be palette, she responded with the soft lavender tones of ‘Bristol’s Hope’. 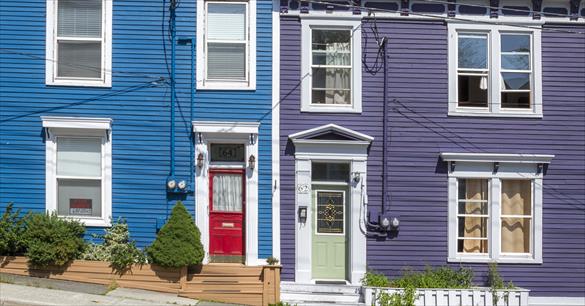 Bristol’s Hope is a community located in Conception Bay, sandwiched between Carbonear and Bay Robert’s. Originally it was established as a sister community to Cupid’s (the first English settlement in North America), and was called Mosquito – a far cry from Bristol’s Hope. The colourful rows of houses in downtown St. John’s are often referred to as Jellybean Row (also a part of the heritage palette, I might add) – for obvious reasons. Every now and then, a tourist will come up to me and ask me, “Why?”

Well, there are two answers as to why. The real, and the kind of, sort of, maybe, but not really real. I prefer the latter. It’s said that in the early days, sailors – who had long been out to sea, when returning from the fishing grounds – would look up to see their homes on the hills. And, every now and then we’ve been known to have a beautiful veil of fog hanging over our city, which is not necessarily the best condition for seeing your house. So, sailors elected to paint their homes in bright colours to make them more visible, to pop and shine against the cool grey backdrop of mist. 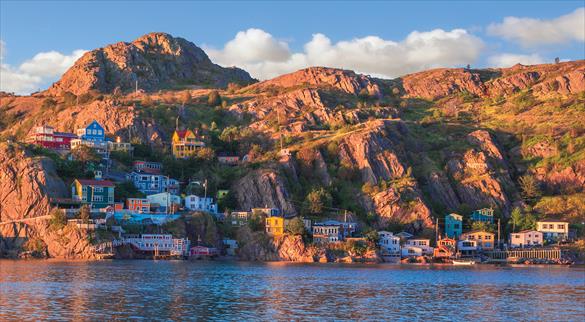 As for the real reason? Let that stand in history books, the more romantic reason is always the best, anyway – at least that’s my humble opinion. In the end, what Templeton’s found in their basement was more than just a couple of old paint chips. It was a connection to our culture that wouldn’t have been found had they not looked in the first place. Just like my old tin of pop. Only with slightly more cultural relevance. Long live curiosity, and colour, of course. I’m a ‘Mollyfodge’ man, myself.
​​​​
Share on Facebook Share on Twitter Share with email