For the past 16 years, spirited talkers with stories to tell have met in St. John’s each month, sharing tales of Newfoundland and Labrador and bringing centuries past into the present.

The rain and drizzle outside doesn’t matter inside Erin’s Pub in St. John’s.

Clustered around tables lit with the pink glow of the stage lights, patrons wrap their hands around their pint glasses, chatting and laughing, anticipating who amongst the crowd might tell a tale from behind the microphone at this month’s Storytelling Circle.

The popular event series is run by the St. John’s Storytelling Festival, a not-for-profit organization that also hosts an annual event each fall. It runs on the second Wednesday of each month from 7-9pm at Erin’s, a landmark live music venue in the heart of the city. Though it takes place in a pub, the atmosphere of the Storytelling Circle is so authentic and unpretentious, it feels more like hanging out at nan and pop’s kitchen table. 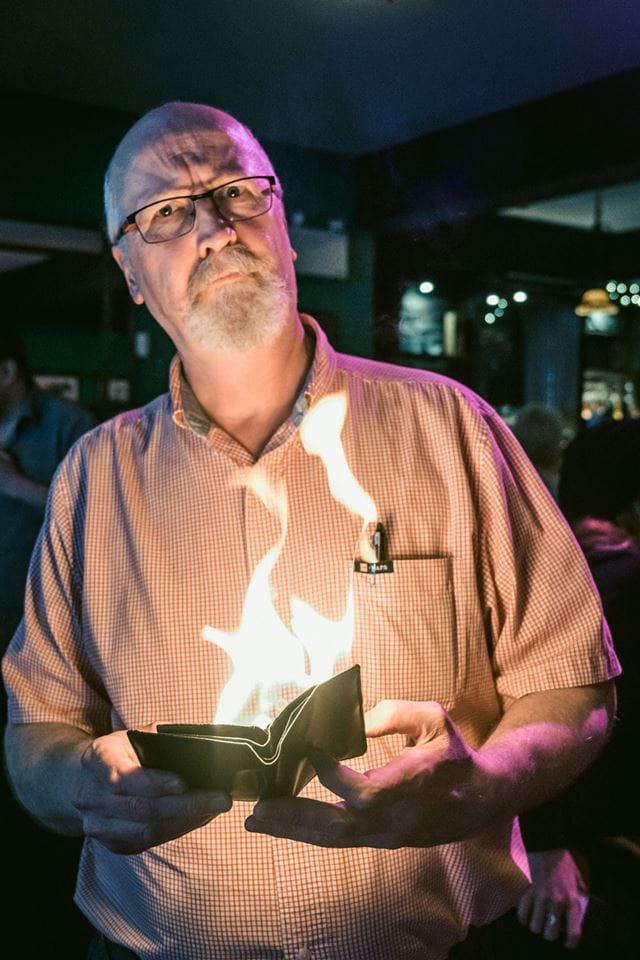 Ken Parsons (above) recounts a card game between the devil and his Uncle Clem in the fictional town of Raisin Arm, NL.
“In a town like Raisin Arm, often, times are hard. And when people wants to take a break, they loves a game of cards,” he says.
He finishes by lighting a card aflame, to the audience’s delight.

“You’re never really sure who’s going to tell a story,” says Gary Green, a well-known storyteller, teacher of oral tradition and one of the regular Storytelling Circle hosts. Like many Newfoundlanders and Labradorians, Green grew up with the tradition.

“My mother was a marvelous storyteller,” Mr. Green says. “I grew up hearing antics about the characters and way of life in the Griquet-Quirpon, which is right on the tip of the Great Northern Peninsula. Eventually I started repeating the stories with my own twist, and then when I taught at Memorial University, I’d tell stories in classes to keep the lectures interesting.” 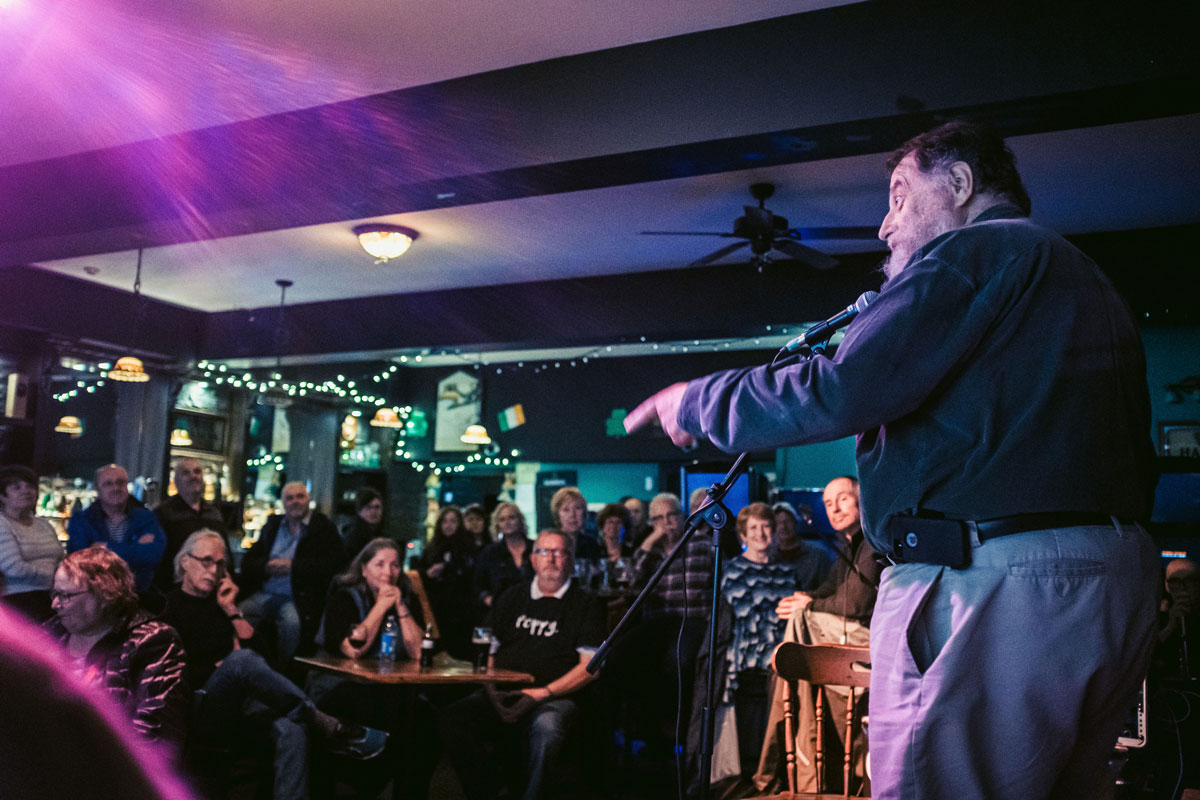 Gary Green (above) regales the audience with a tale from legendary storyteller Ted Russell. With flapping arms and wild eyes, he transports the audience to the fictional community of Pigeon Inlet, recounting an incident involving geese and unintentional aviation. 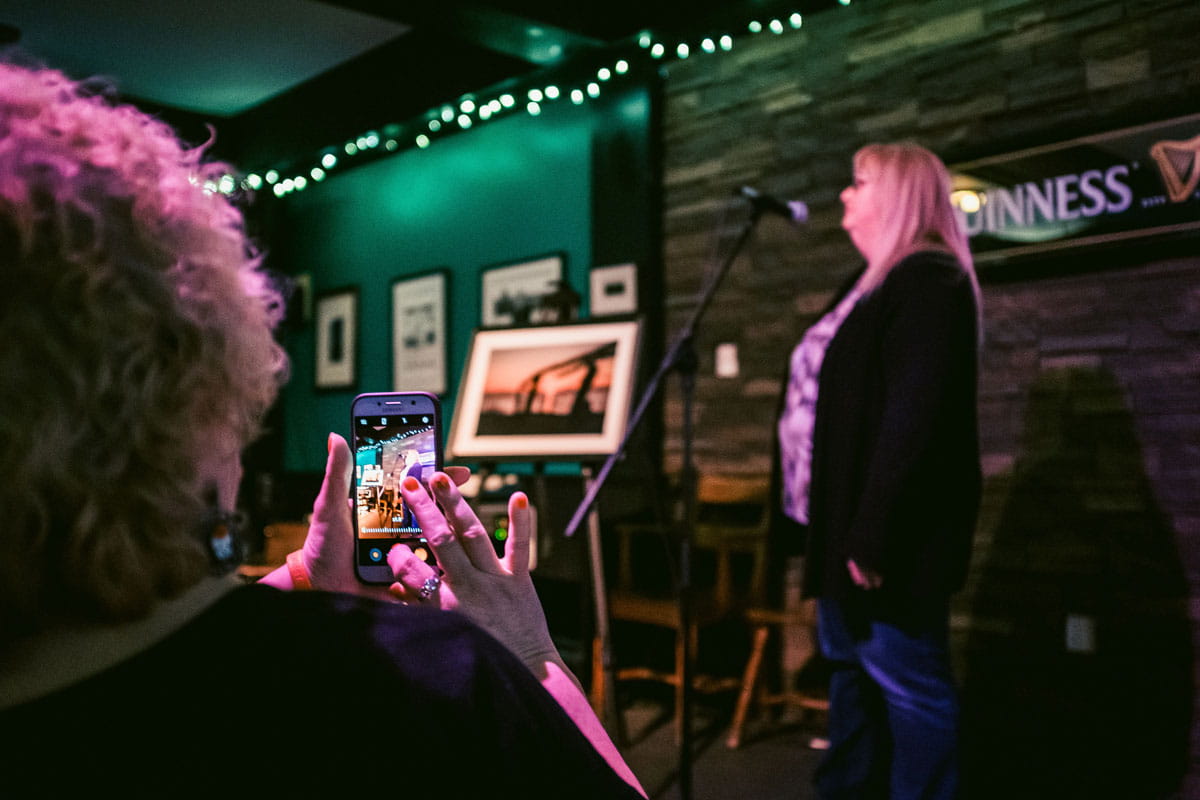 Janine (above) tells the story of Mary, who brought her grown son back to her hometown of Trinity Bay, NL., after years of living in the big city. “Her days [were] spent on the oceanside – skipping rocks, [with] the seagulls, the fishermen coming in on their boats,” says Janine. “But as [Mary] grew older, she yearned for the city.”

Mr. Green, a former assistant professor of psychology, has been involved with the Festival since its birth in 2004. Before the event moved to Erin’s, the venue was the Crow’s Nest Officer’s Club – a treasure trove of military artifacts and a National Historic Site of Canada. (Organizers moved the event to Erin’s for accessibility reasons.)

“One evening, as it turned out, there were World War II veterans in the audience,” Mr. Green says. “The whole evening I’d drafted in my head went totally off the rails, and it got to be an evening of veterans telling some stories that you’d never see in history books. Not by a longshot.”

Another night, a Holocaust survivor attended the Circle, Mr. Green recalls. “The stories that came out were incredible. I’m getting cold shivers just thinking about it. There are phenomenal evenings just filled with emotion like you couldn’t imagine.”

Topics run the gamut, from family to politics to weather and beyond. Some tellers are theatrical, using props and magic tricks. Some flail their arms and widen their eyes, morphing into caricature. Some stories are nostalgic and sincere, some are supernatural. And many stories are packed with humour.

Chris Brookes is a Peabody Award-winning author, storyteller, documentarian and sound artist. He’s also a regular at the Storytelling Circle. Mr. Brookes says he was in danger of stumbling down a bad road until a high school teacher changed the direction of his orbit. 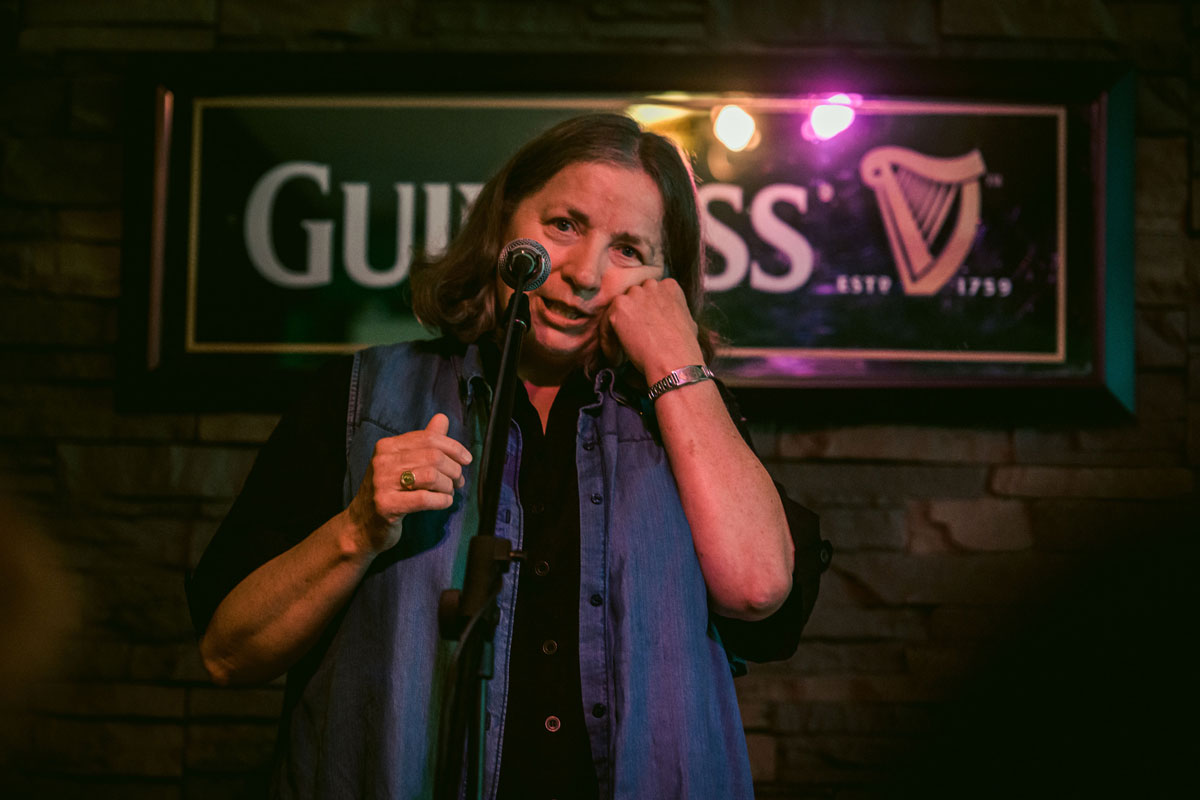 Marion Counsel (above) tells the haunting tale of her sister’s brush with death in Red Island, Placentia Bay, in 1966. Ms. Counsel says she began performing recitations for her children, who wanted to hear stories from her own childhood.

“You know how some of us go through school, and get to be a smart aleck, and taunt the teacher? I was unfortunately one of those miserable kids,” he says.

“But [my grade 11 teacher] turned me completely around, completely changed my view of things. And he did it, I think, by telling stories in class. He seeped into me in a way that was unexpected. Without him, I would be a different human being.” 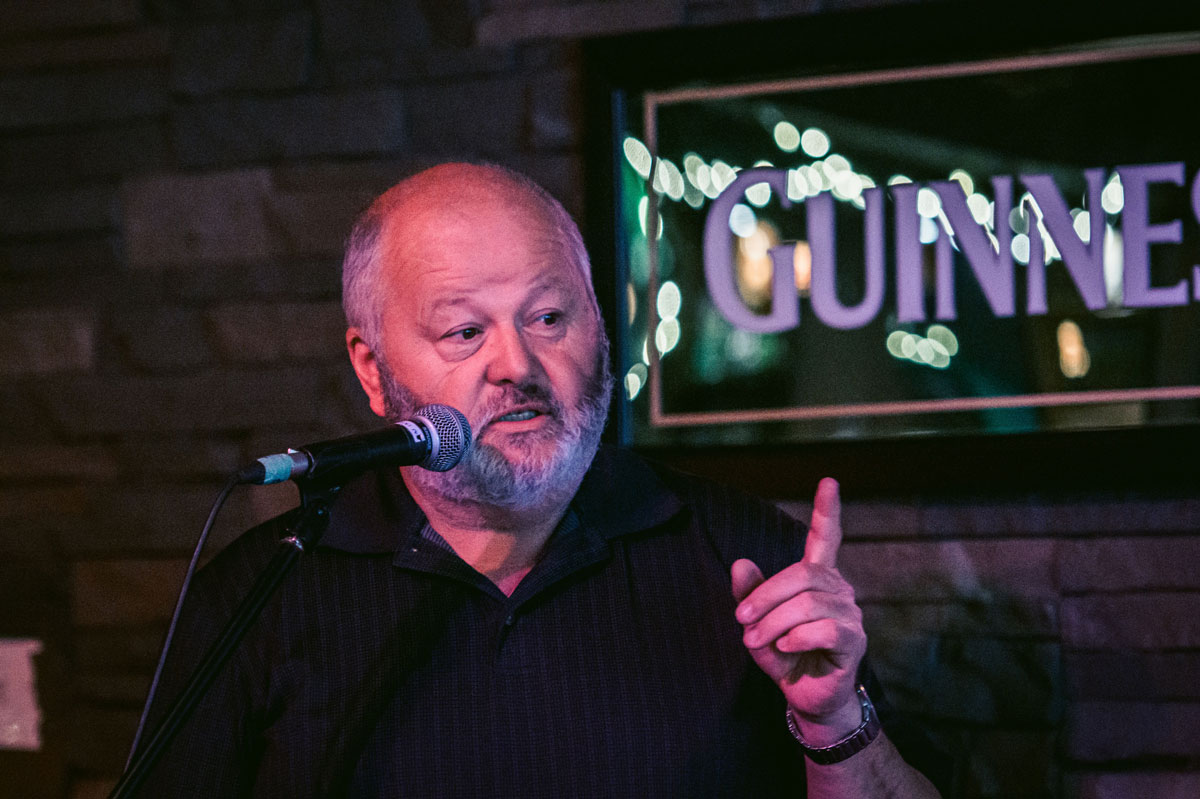 “In 1972, I met the missus over there,” says Derrick Dymond (above), pointing at his wife. “And today is the 47th anniversary of the day we decided to go steady.” He follows with an account of a ghostly ride on the Bell Island ferry.

That teacher was Ted Russell, a godfather of Newfoundland recitation and storytelling. Mr. Russell was widely known for his radio monologues based on a fisherman named Uncle Mose who lived in the fictitious Newfoundland community of Pigeon Inlet. His stories are staples of the Circle.

When he’s not telling stories himself, Mr. Green is teaching others how to do it. Many of Green’s students now perform their own stories onstage at the Storytelling Circle. A number of them also operate their own circles, bringing their stories to festivals across the country. 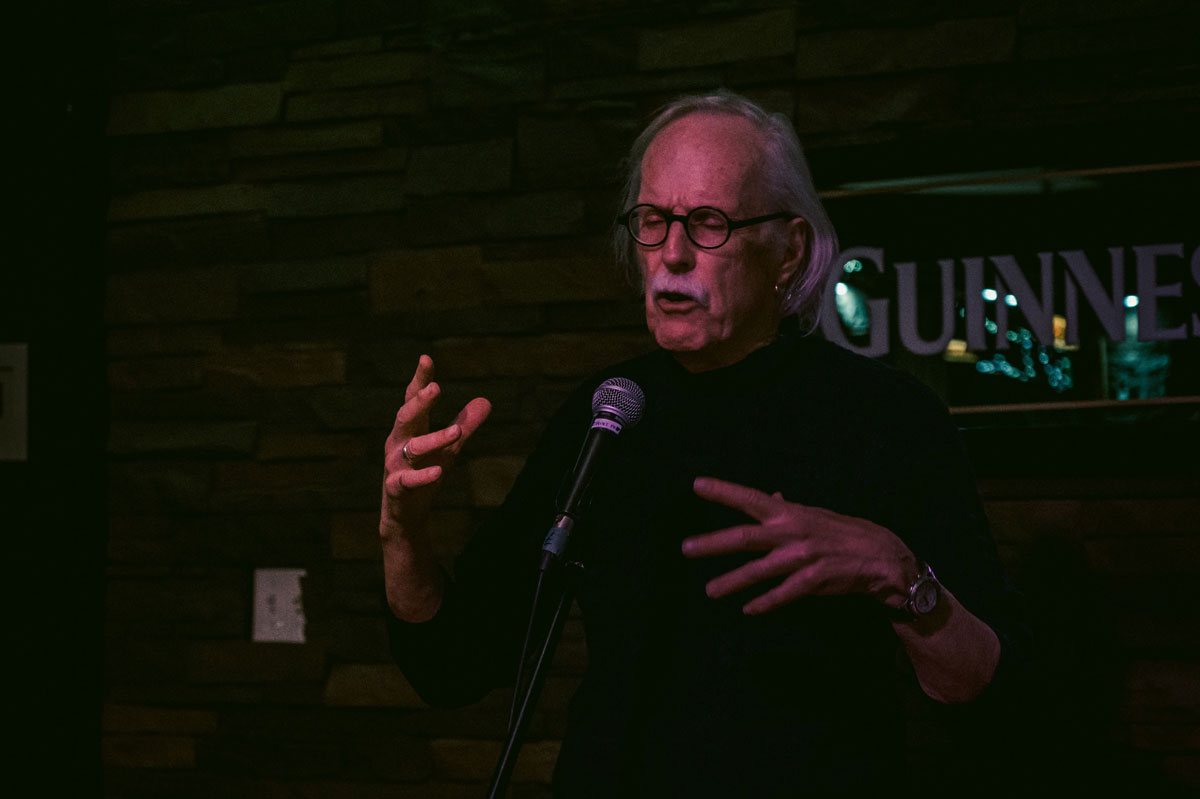 Chris Brookes has won over 40 awards for Battery Radio, his documentary production company. He performs a recitation about a mischievous brewer from the past who “…came sliding down the sidewalk, in the sultry summer sun. His left hand was a bottle, and his right hand was a gun. His beard was all wild and woolly, and his hair was all scraggly, too.”

Mr. Green quotes an African proverb: “When a storyteller dies, a library burns.” We can’t just write down our stories, we need to tell them, he says.

He recalls telling some of his stories for a very receptive audience member one day about 10 years ago.

“I got a call asking if I could come down [to the Crow’s Nest] and spin a few yarns to someone there who was asking to hear them. So for an hour or two, I told stories about the artifacts in the Crow’s Nest, because nothing there is just what you see on the surface,” he says.

The person who wanted to hear the stories ended up being longtime CBC Radio storyteller Stuart McLean, who re-crafted a number of those stories for his 2013 Vinyl Café tour.

“I loved hearing the way he told them,” says Mr. Green. “Recrafting and re-telling – that’s how stories live.” 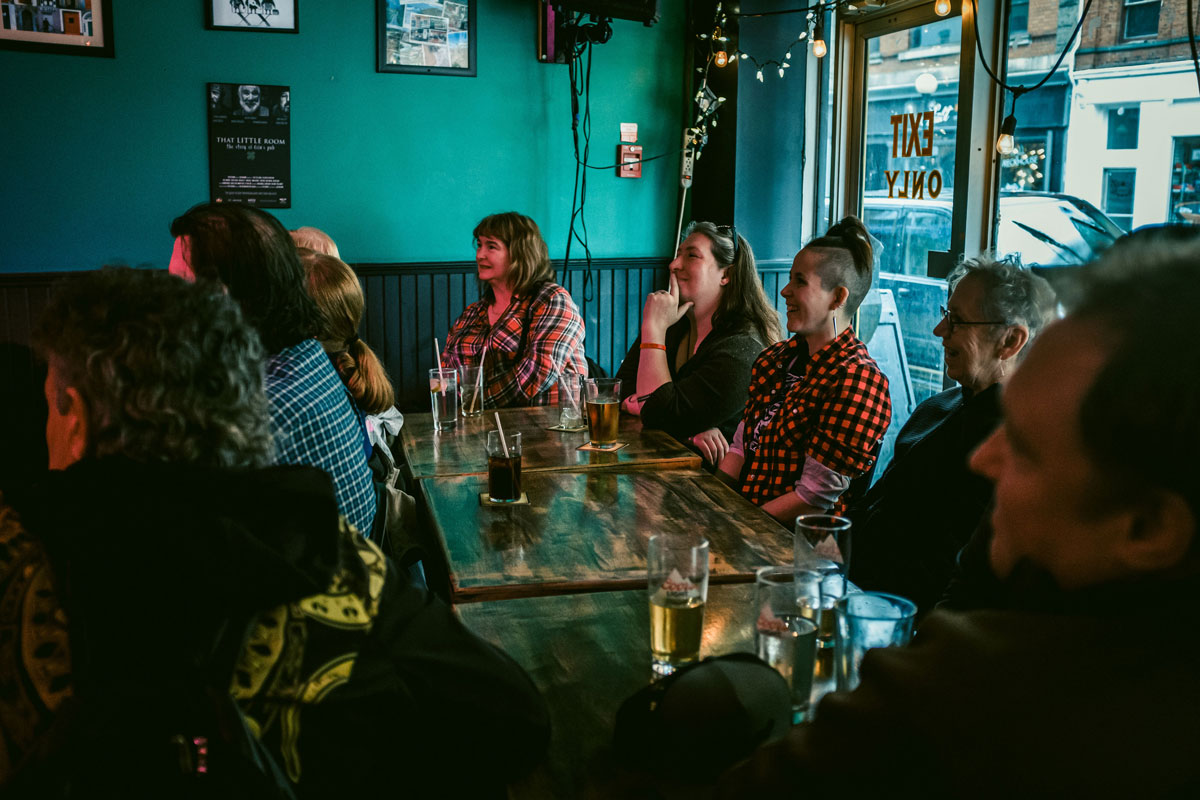 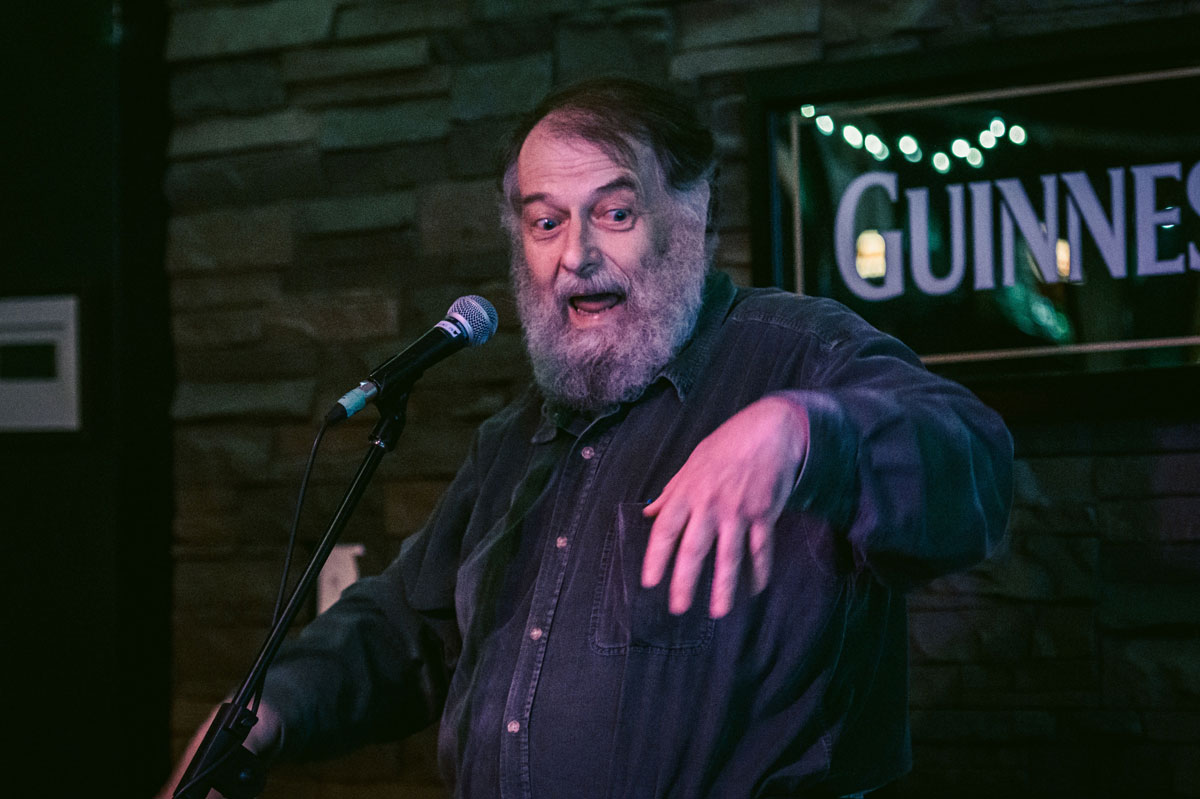