Rowing Rings Around the Competition

Around here, even the weather can be a little playful. Sun splitting the rocks one minute, a light sprinkling of summer rain the next. But towards the end of July, barometers get checked and weather reports are on the minds of everyone in the capital city. For over two hundred years, the Royal St. John's Regatta has been held on the first Wednesday in August. Weather permitting.

That morning, Tina Hunt will be waiting by her phone for a familiar call. She knows her father, Paul Ring, has been up early and down to the shores of Quidi Vidi checking the conditions on the lake. When the phone rings she'll speak before he can: “What's the pond like?” And after 65 Regattas, he'll have a pretty good idea whether or not the oldest continuing sporting event in North America is going ahead.

She won't be the only one waiting for word on this weather-dependent civic holiday. If postponed, the city will be open for business as usual. If the morning boasts clear skies and low wind, however, the banks of Quidi Vidi will soon be packed with a crowd ready to partake in the food, the games, and the excitement of over 30 races. Races like no place else on earth. 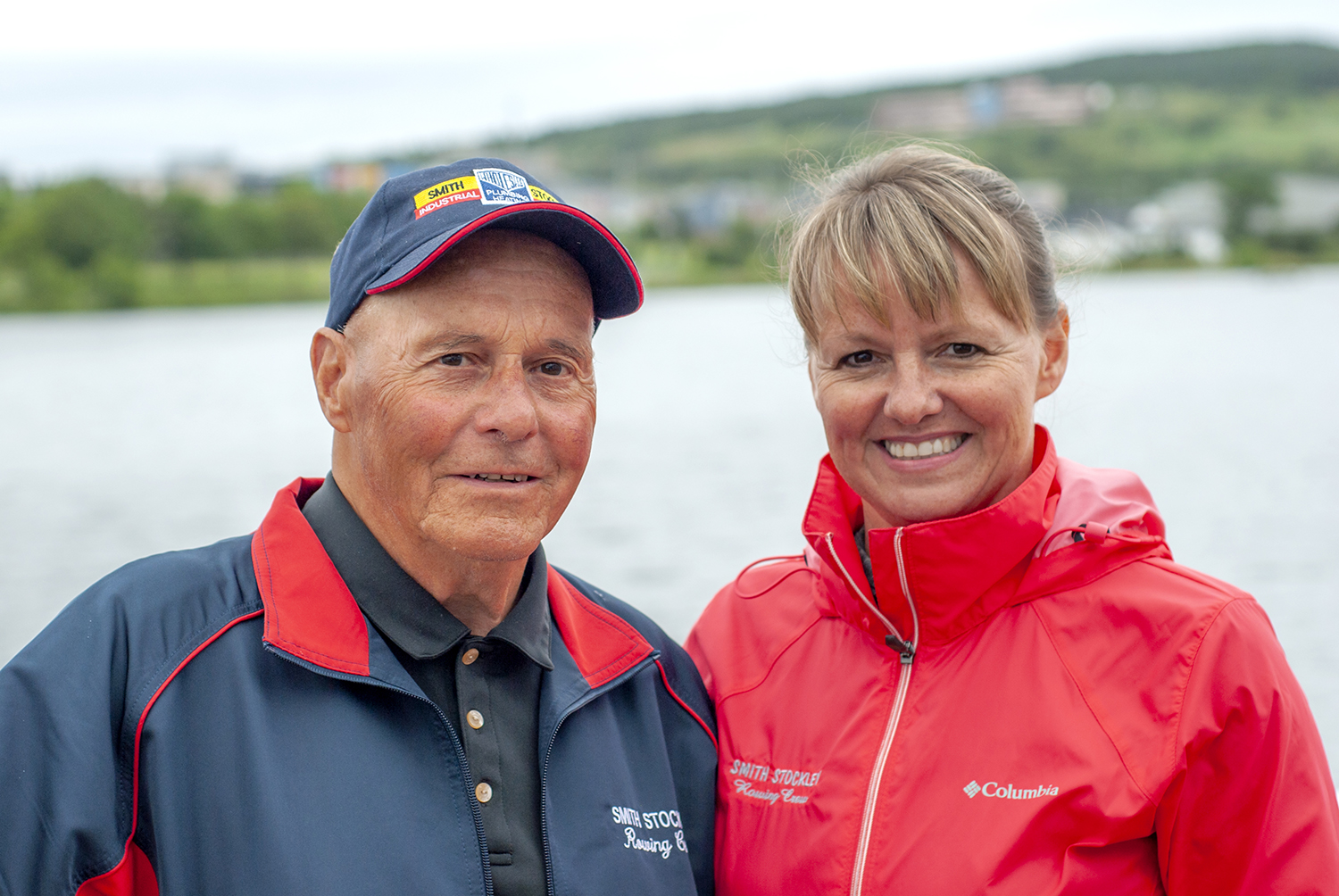 It isn't just age that sets this competition apart. Here, racing crews are composed of six rowers, an unusual number. They race in boats so heavy they have to be lowered into the water by straps, and it's the only race in the world that employs fixed seat rowing. And in no other Regatta do you turn and finish where you started. This “turning of the buoy,” as it's called, is a special skill that our rowers have to master. Here, at the Royal St. John's Regatta, the challenges are harder and the stakes are higher. It's an event where records are set and, sometimes, take a long time to break.

In 1910, the Lord Warden of England donated a set of medals to any crew that could beat the 1901 record of 9:13, set by a team of rowers from Outer Cove. A record that remained in place for 80 years until it was beaten in 1981 by a team coxswained by Jim Ring and two of his sons: Randy Ring and Paul Ring.

Paul grew up around the Regatta; his father, brothers, uncles, cousins were all rowers. He still remembers his first visit to the Boathouse at the age of four, and he rowed (and won!) his first race at the tender age of twelve. He hasn't missed a Regatta since. Tina's upbringing was no different and she always knew it was just a matter of time before she was rowing alongside her father. They've rowed against each other, they've coxswained each other and, when it comes to Paul, she couldn't ask for a better coach. She recalls a time when her form was failing her. “He told me to move one inch one way... and it was perfect. He can fix anything.” Paul's secret? He starts from the oar and works in. “If the oar is not doing something right, I look at the person and that's how I figure out why the oar is doing this or doing that.”

That's the kind of knowledge that is passed down through the generations. Paul can't recall exactly whether or not his grandfather rowed but he and Tina agree; there's a good chance their family may have been taking part in the Regatta since the very beginning, two centuries ago. And Paul's father, Jim, used every drop of that knowledge to train his crew for that 1981 race.

“We'd run up Signal Hill to Cabot Tower. In our work boots. Every day, rain or shine. My father would drive behind us, pick us up at the top and drive us back down. We went into the woods in Torbay and cut down six big spruce trees to make sculling oars twenty-four feet long.” Those oars were twice as long as the regulation ones. “Our arms were dead!”

But that's the kind of regiment a race like the Regatta demands. Its roots come from fishing crews challenging each other, towns challenging each other, to meet on the water and may the best crew win. And the audience, upwards of 50,000, is there to eat it up. They're there to play games of chance, sample food, take the kids on amusement rides and, of course, to cheer on the races. With crowds that big, one wonders if the rowers can hear them from the shore. “Only once,” says Paul, “in 1981.” 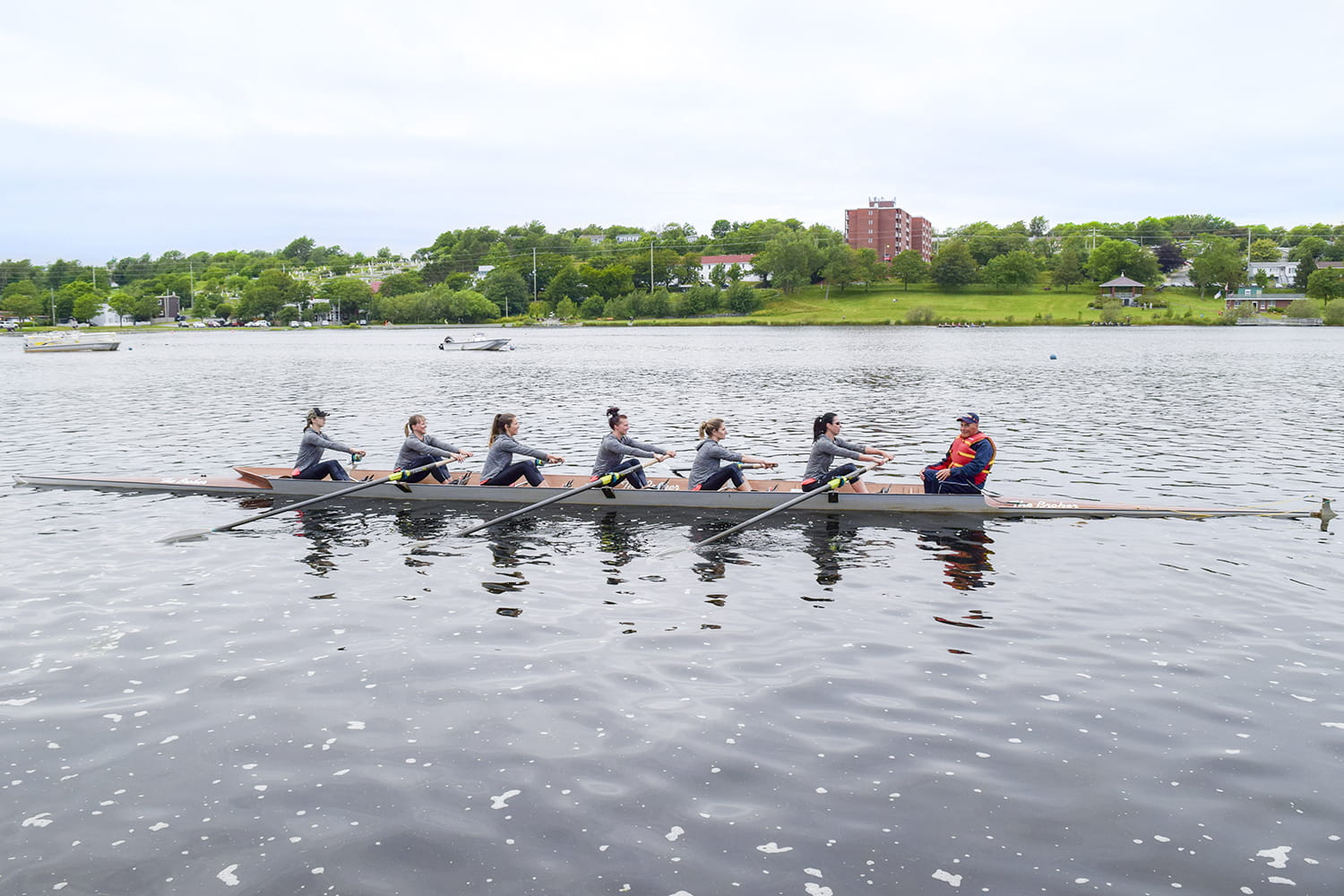 As their boat made its way toward the finish line, all hands on shore knew an 80-year-old record was about to be broken. “In all my rowing years, that was the first time I heard people. I didn't hear them individually. I heard a big roar. So I'm trying to row harder, and the harder I row, the closer I'm getting to the finish line and the people got louder. I thought I was hearing voices in my head! The roar was unbelievable. It was like a thunder.” Their final time: 9:12:04.

Paul recalls a man running into the water to meet them with his baby still in his arms, his wife frantically following him to retrieve the child. The tradition at the time was the winning crew collected their adulation from the top of the Boathouse and Paul maintains his feet never touched the ground from the time he left the boat until they landed on the shingles of the roof. He was missing one sneaker; someone from the crowd had made off with it as he was carried along. “Hopefully he only had one foot!” 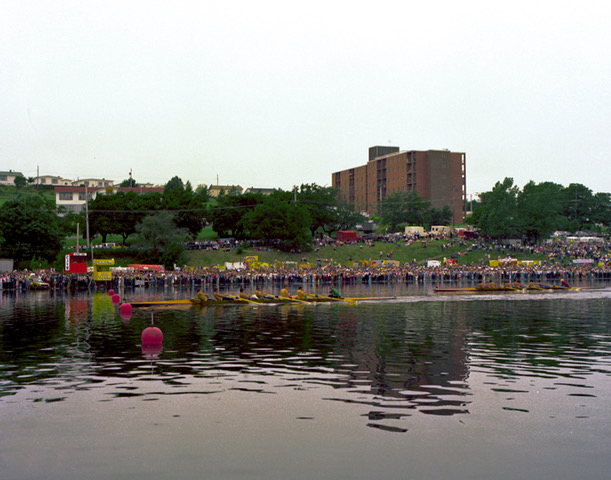 This is the level of excitement this race creates and the fervor felt when a record is broken. In this off the beaten path destination it makes sense that a tradition like this stays strong. A race like no other in a place like no other. Where people come together for one day of fun, sun and healthy competition, and a celebration of all that is unique about the Royal St. John's Regatta.

The Ring family shows no signs of slowing down. Family living away regularly return to watch the race. Those who can't make it phone home and ask Paul to call ten hard for them. For the laymen: ten hard strokes with the oars in their honour. Now, with a niece who’s just taken up rowing, that puts three generations of Rings on the water on this year’s Regatta Day. And Paul is still going strong.

And when asked about all the medals, trophies, and ribbons he's won over his 65 years of rowing? “Lucky. It is. When you can do something like that. I consider it a gift. Someone looking after you.”