By The Globe Content Studio
How the province honours its natural landscape, from ground to table

Blue sky, crisp air, not a breath of wind: It’s a perfect November day in Newfoundland. At a time when most think harvest season is long over, Dawson is outside all day, every day.

Apples, plums, damsons and berries remain plentiful if you know where to look, he says. And the woods surrounding St. John’s, Newfoundland and Labrador, are still rich with several species of mushrooms.

“We’ve always been known for our seafood,” Dawson muses. “But we’ve got some of the most pristine, untouched land in Canada, and I’d say the most wild food anywhere. We should be known for these land resources, too.” 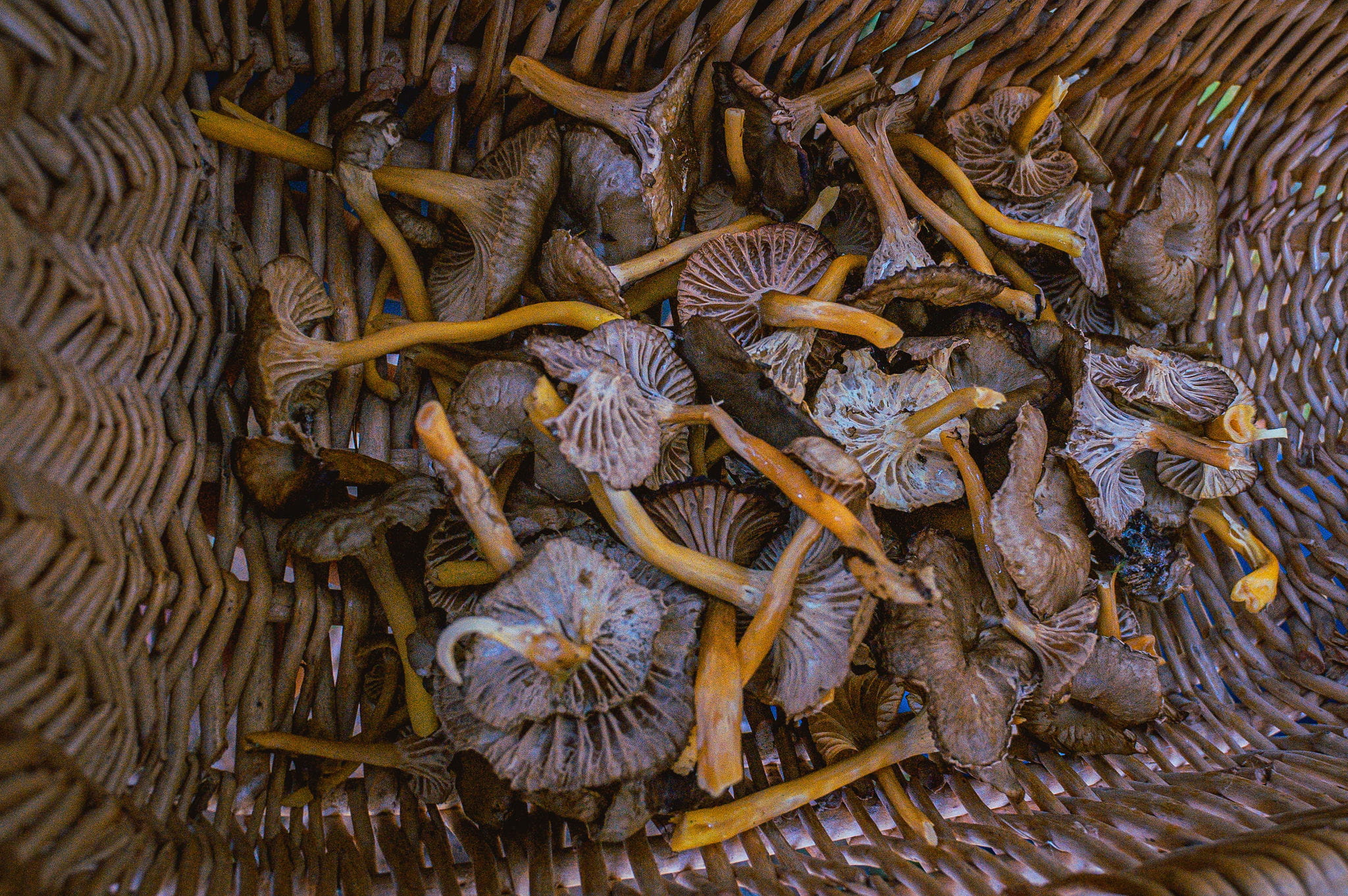 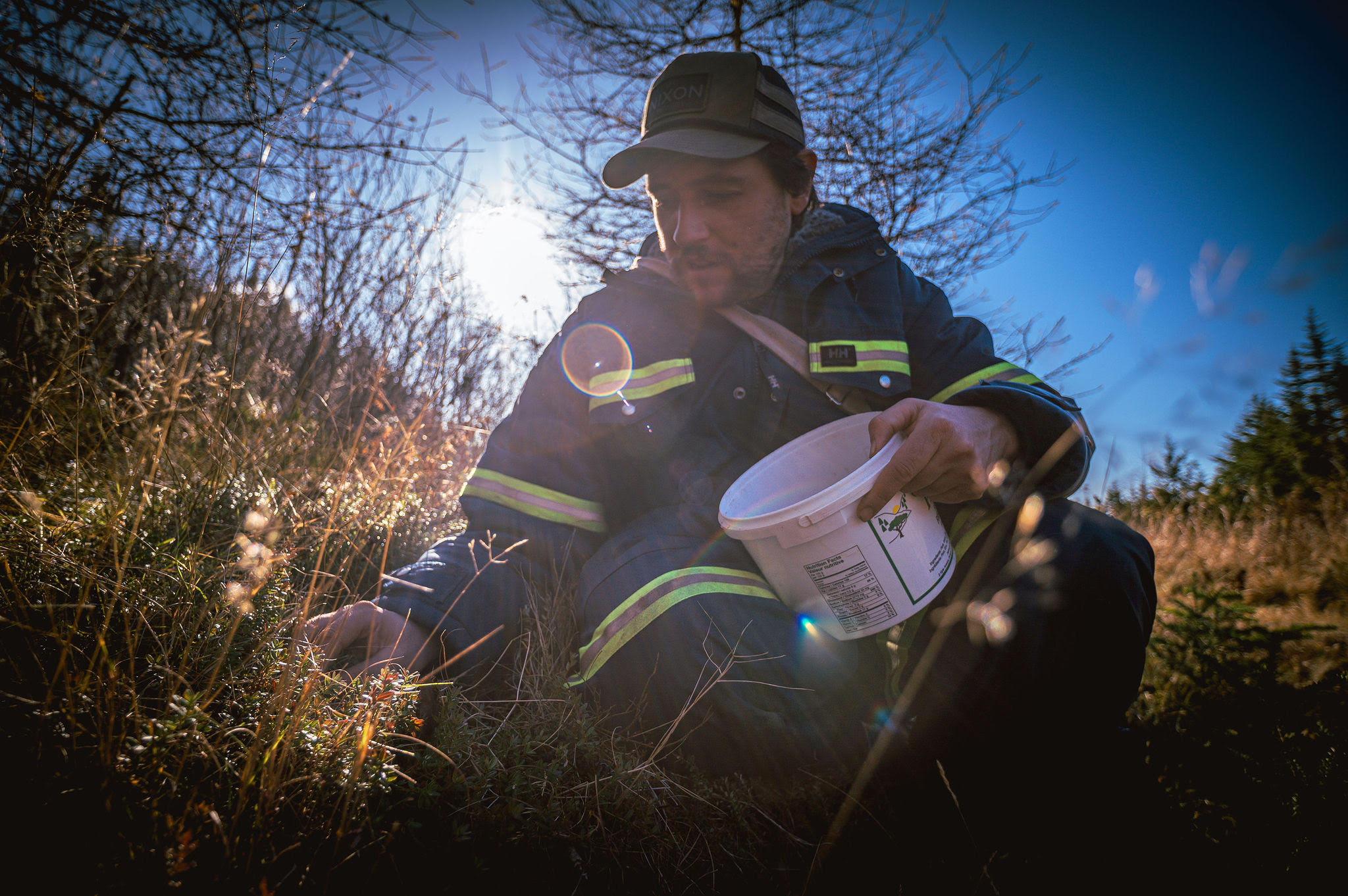 As one of Newfoundland and Labrador's best foragers, Sean Dawson, 31, regularly goes out on trips into the wilderness surrounding St. John's, hunting for berries, mushrooms and the like.

In the last decade, Newfoundland and Labrador cuisine has gained recognition as some of the best and most creative in Canada, driven by a deep enthusiasm for foraged food and wild game. 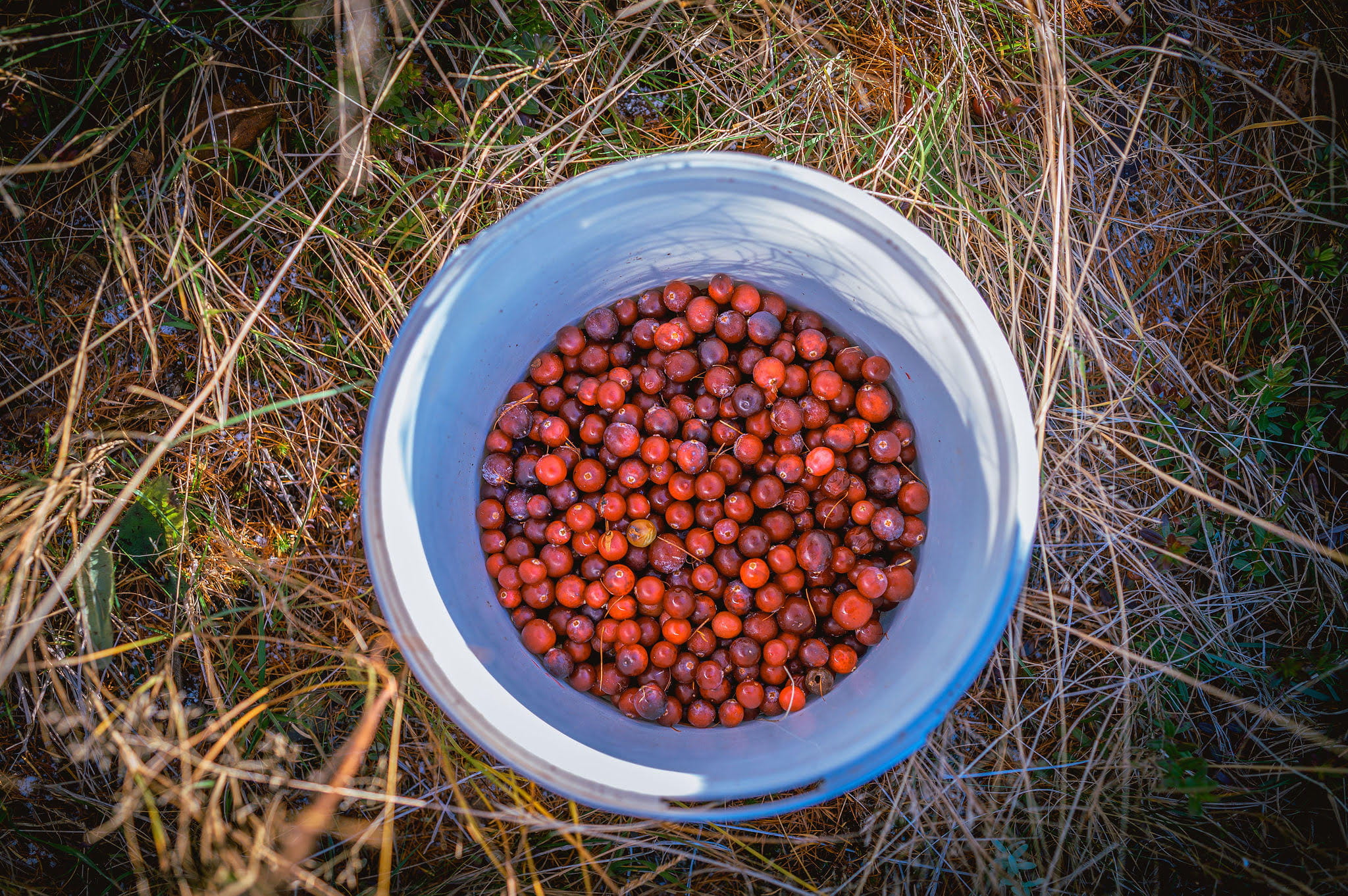 The province is home to a number of annual food festivals, which bring together a community of chefs who love to experiment with unexpected just-harvested ingredients.

Dawson – who now makes a living finding food for local restaurants, markets and the like – has been growing and foraging plants his whole life.

As a kid growing up just south of St. John’s, he picked berries with his grandmother and mussels with his brother. In his early 20s, he grew a bumper greenhouse crop of tomatoes and hot peppers that brought him to the St. John’s farmer’s market.

Over time, Dawson got to know many of the chefs who were leading the new wave of modern and determinedly local eating, and has since made a name for himself as one of the province’s best foragers.

“They found out I picked mushrooms, and then I was supplying all the restaurants with mushrooms,” Dawson, now 31, laughs. “And then they asked for berries and whatever else I could get.” 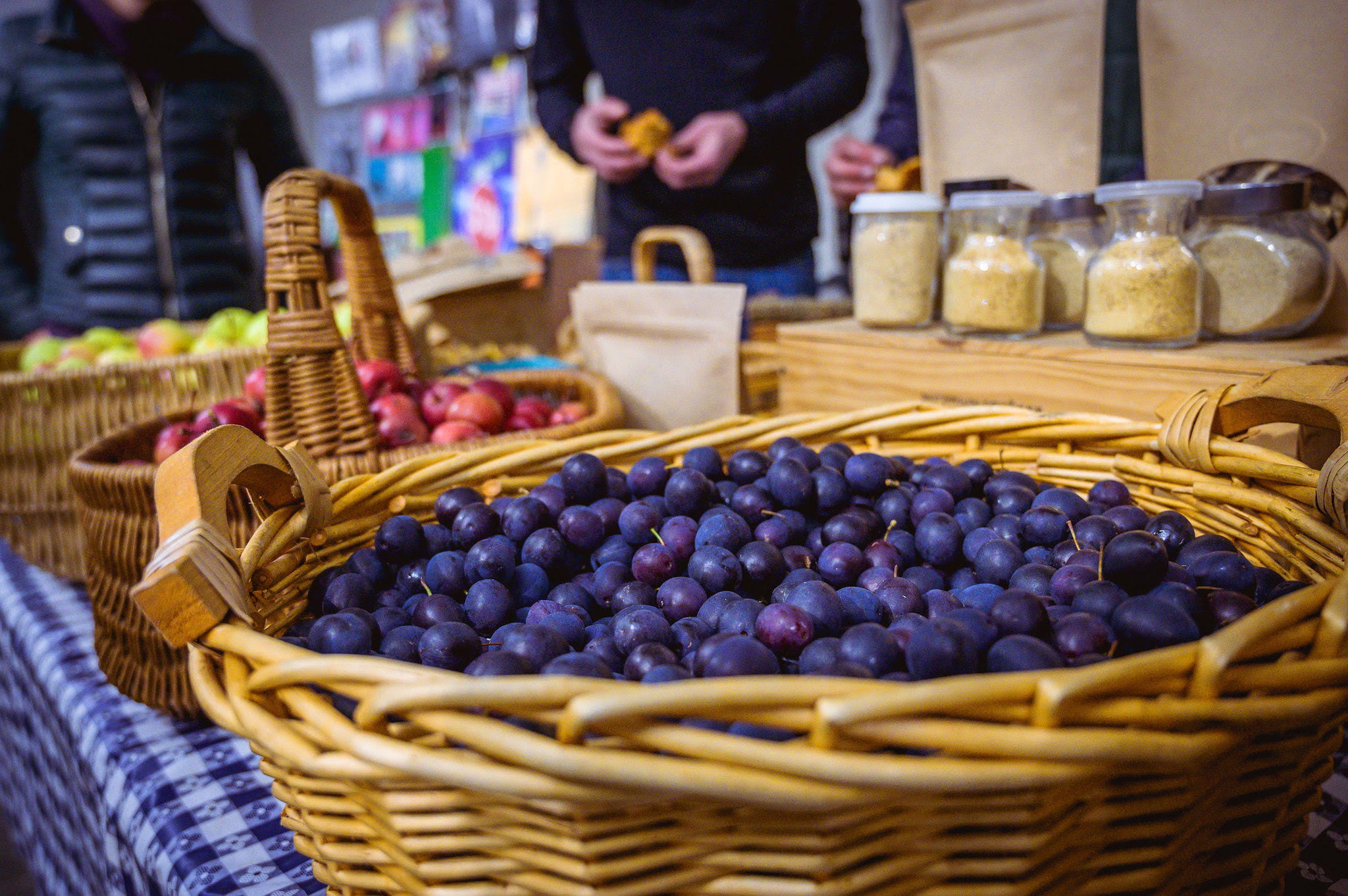 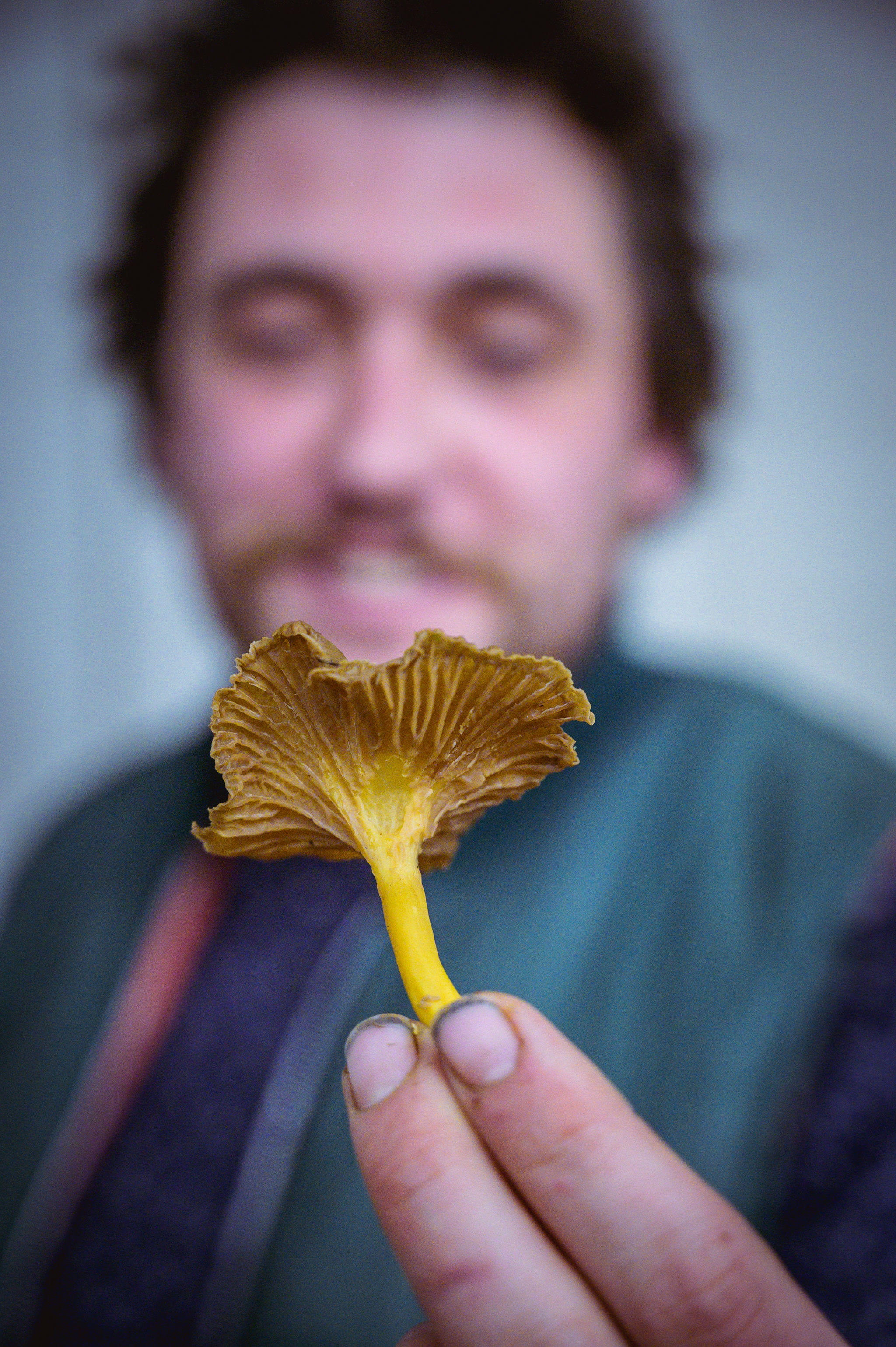 Dawson serves foraged produce to a number of local restaurants, and sells what's left at the St. John's Farmer's Market.

Using local ingredients reduces the carbon footprint and amps up the flavour of the dishes served in Newfoundland and Labrador restaurants.

But foraging plant life isn’t the only sustainable practice prevalent in the province; many restaurants also rely on locally hunted game, which Dawson notes is a natural complement to the berries and mushrooms he gathers.

“It goes so perfectly with the game we have. You pair what I pick with trout, or cod, or moose, or caribou – it’s all meant to be together,” he says.

“I really love how creative this food makes you as a cook, even a home cook like myself,” he adds. “And when you always have good ingredients, everything always tastes really great.”

A two-hour drive away, at the northernmost tip of the Avalon Peninsula, Terrence and Courtney Howell are also passionate foragers. Their restaurant, Grates Cove Studios, overlooks the breathtaking coast of Grates Cove, population 133. But their focus is not only on berries or other land-growing plants – they also pay attention to the many varieties of seaweed that grow underwater, just metres from their restaurant.

In all but the harshest weather, they’ll don snorkeling gear and carefully tread into the province’s frigid ocean waters to harvest seaweed for salads, pastas and other dishes. The pair also collect one species to make a seaweed lotion that they sell across the country.

“Seaweed is so healthy, and so versatile, and it grows best in the harshest climates,” says Terrence, who grew up in New Perlican, just down the road from Grates Cove. “When it’s just above freezing, and the water is its most violent, it thrives.” 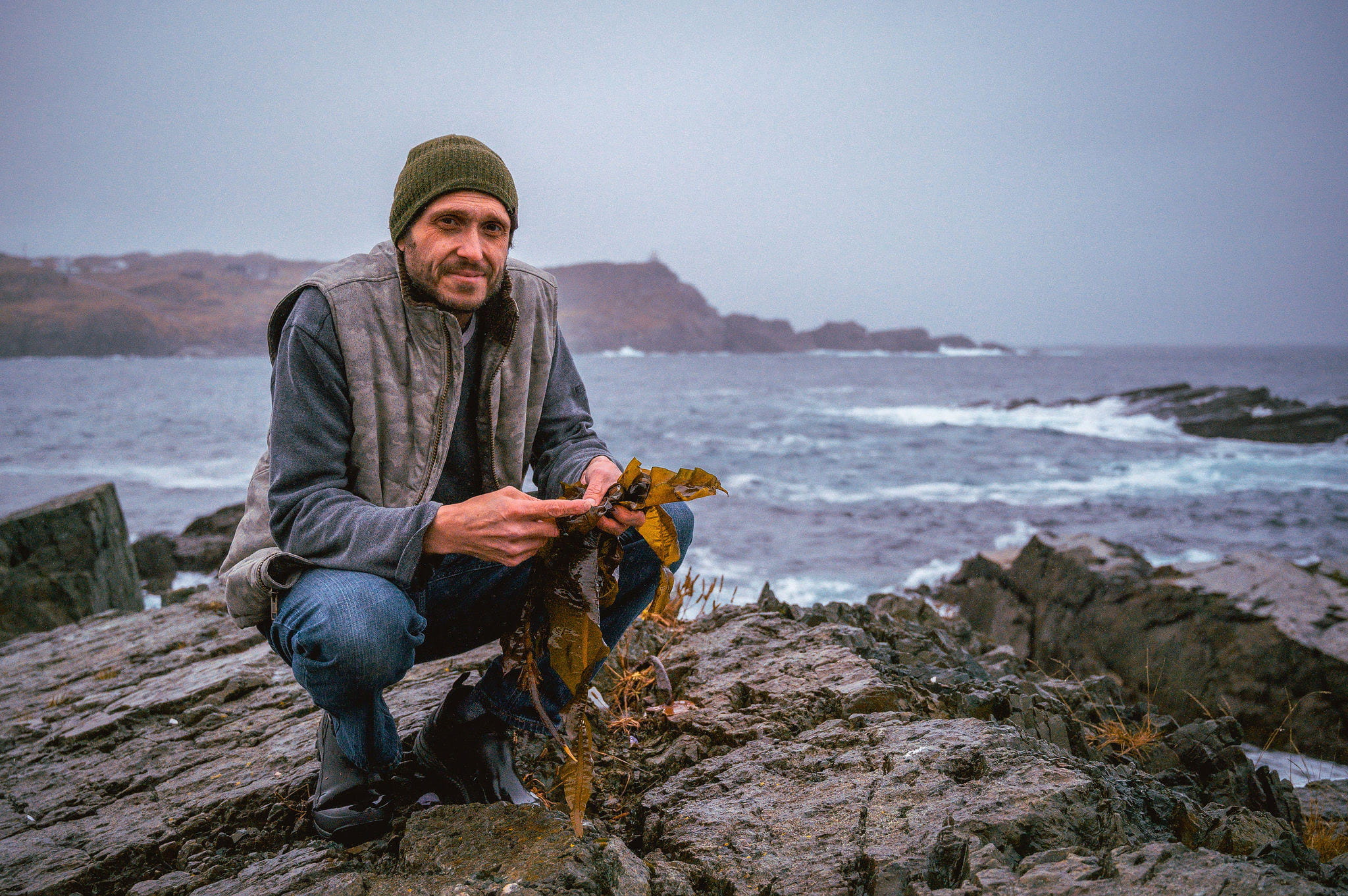 Terrence Howell, co-owner of Grates Cove Studios, regularly wades into icy waters off the Avalon Peninsula to find seaweed, an ingredient in many of the restaurant's dishes.

Located off the beaten path, the restaurant’s remote location made it a risk for the pair when they first opened it eight years ago. But over time, their business has steadily grown from a small cafe serving pea soup and jambalaya – an homage to Courtney’s Louisiana roots – to the Restaurant Association of Newfoundland and Labrador’s 2019 Restaurant of the Year.

The menu features Cajun and Creole dishes, tweaked to feature local vegetables and seafood – like snow crab étouffée, cod couvillion and shrimp boulettes. Sushi often makes an appearance, among other seaweed-based dishes. Courtney attributes their ability to cook creatively to the flourishing natural landscape that surrounds her.

“It’s just so wild,” Courtney says, looking out the window of the dining room, over the jagged, raw landscape. “This is the right place for exploring the land, water, food. Everything is an inspiration.” 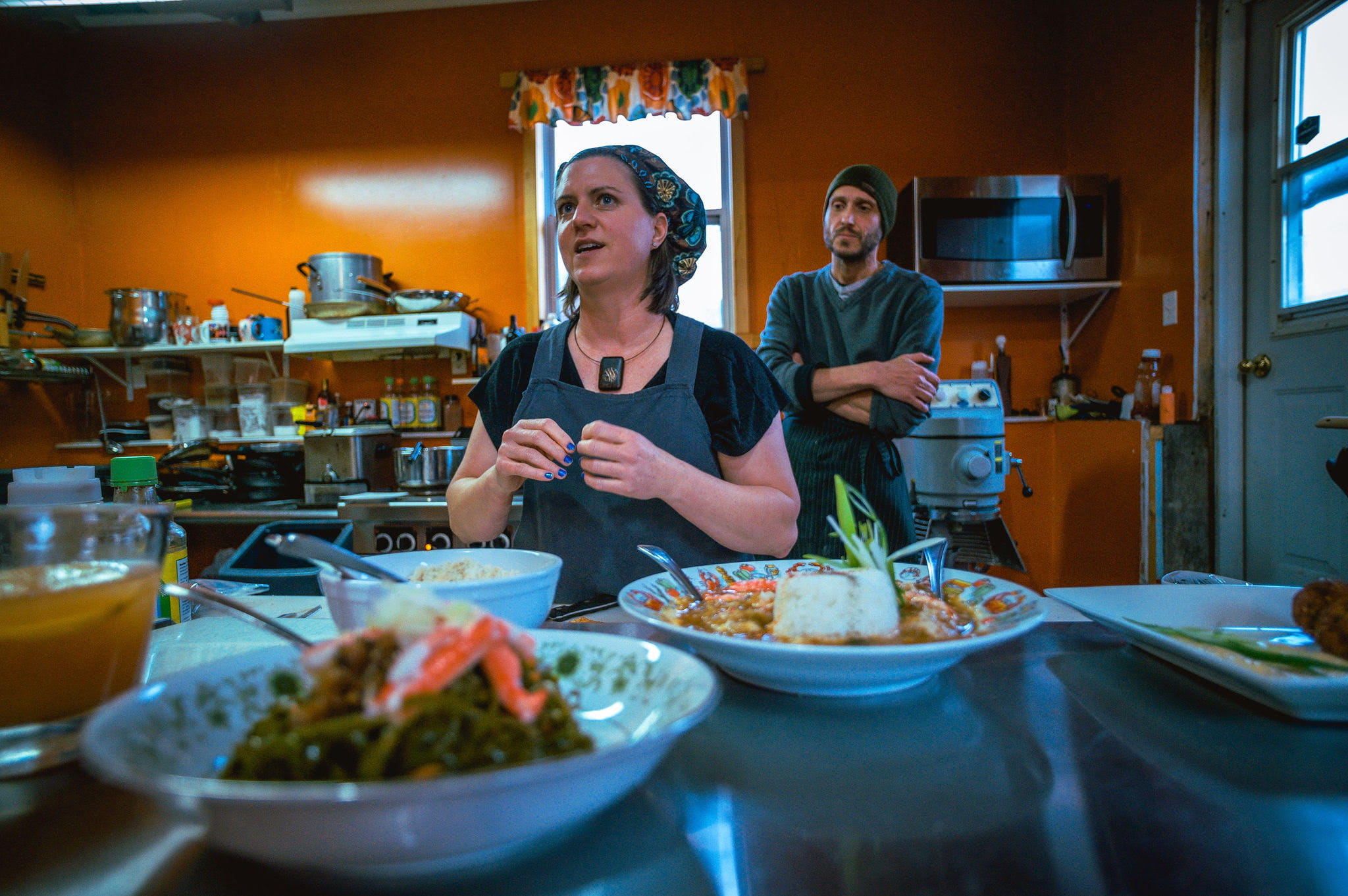 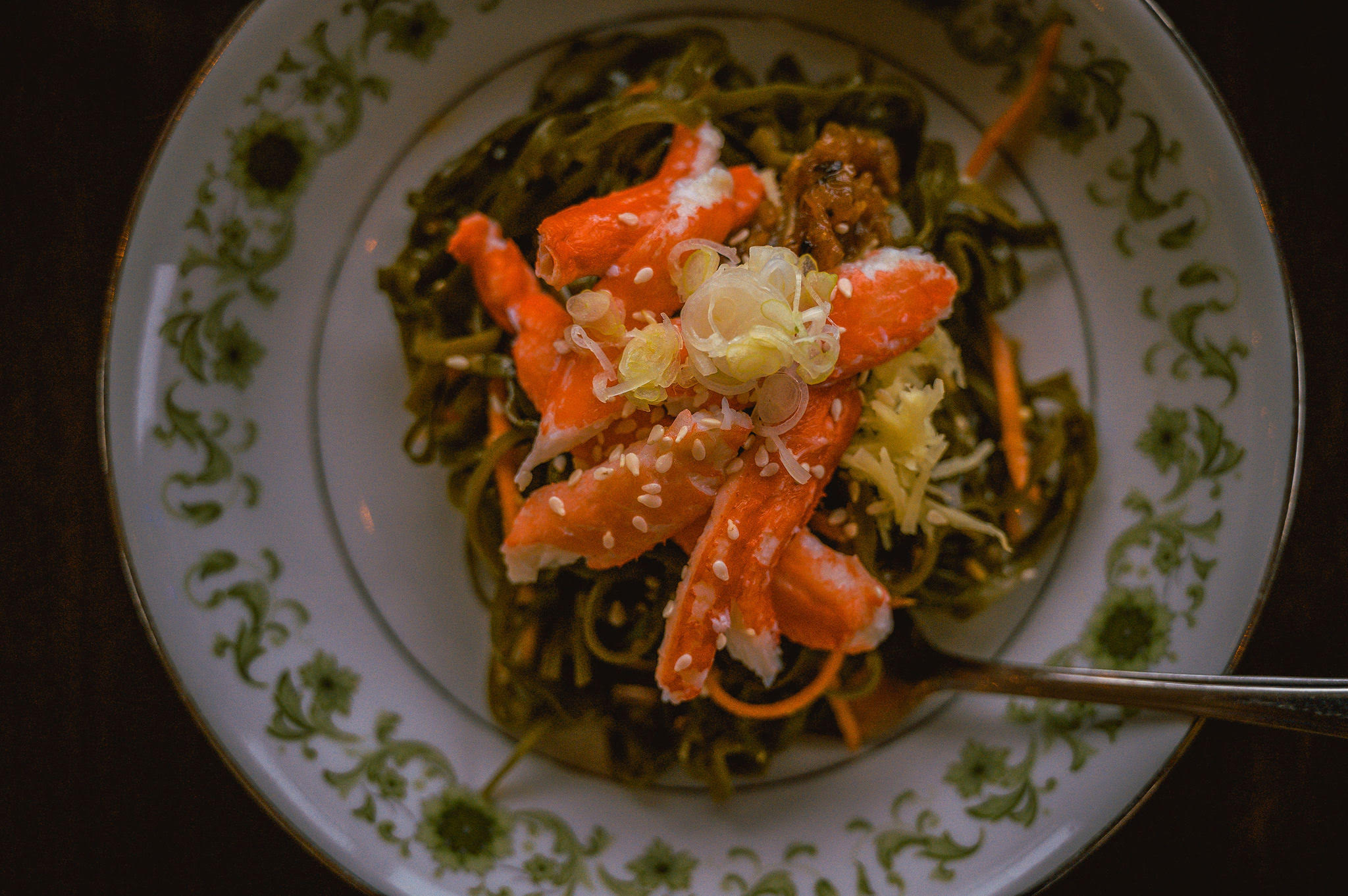 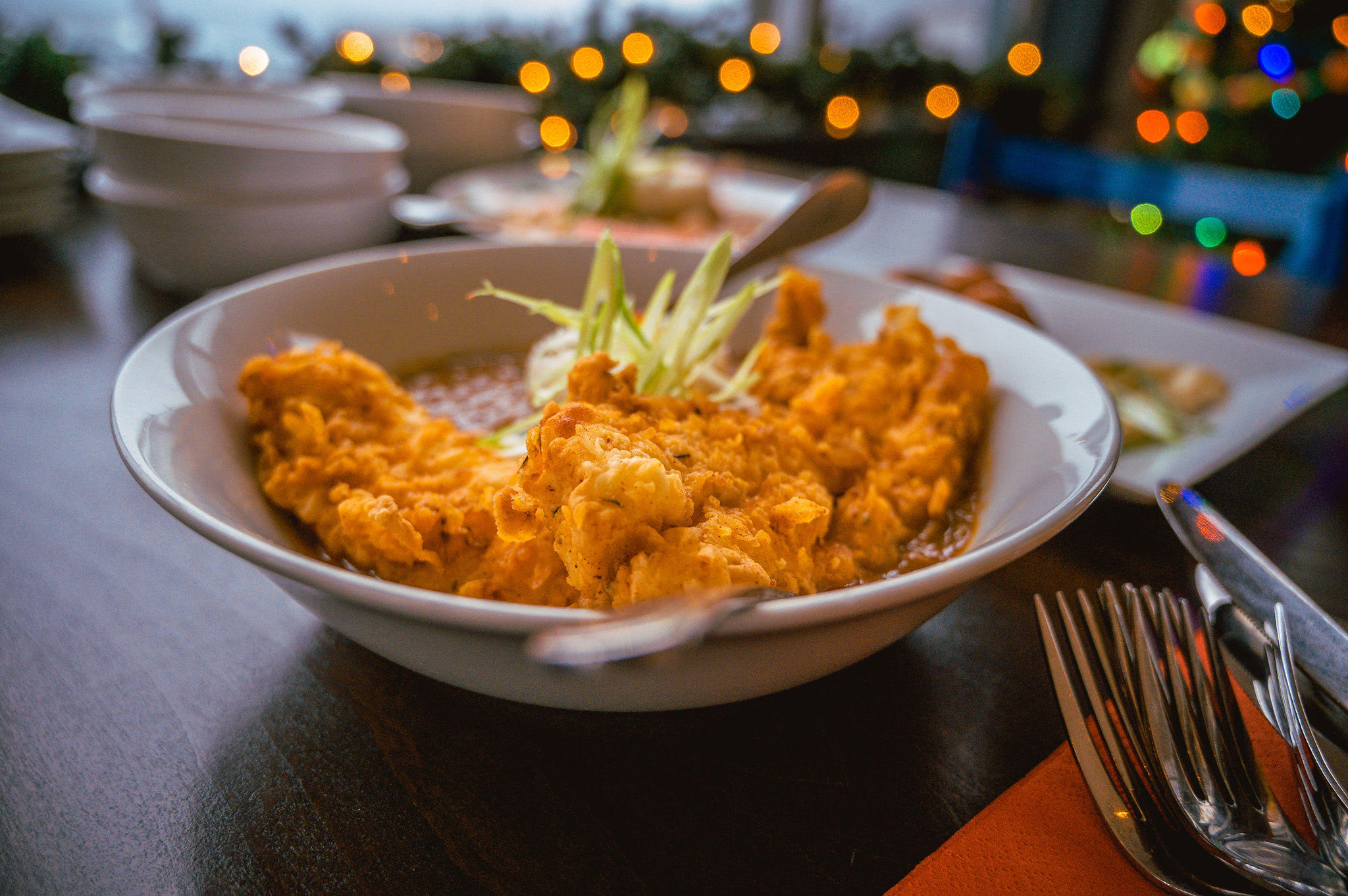 Despite its remote location, Grates Cove Studios has developed a name for its colourful Cajun dishes made using local ingredients.

There are limits, of course, to what grows naturally in Newfoundland; for every odd ingredient that restaurants can source locally, there are three that they have to ship in. That’s where the innovation of residents like Krista Chatman comes in.

Chatman, who owns Three Mile Ridge Farm and manages the Clarenville Farm and Market, about 200 kilometres north of St. John’s, oversees an onsite garden and greenhouse that produces “everything you wouldn’t typically see in Newfoundland,” she says. “Swiss chard, collards, kohlrabi, fennels, corn, jalapenos – we’re filled to the brim.” 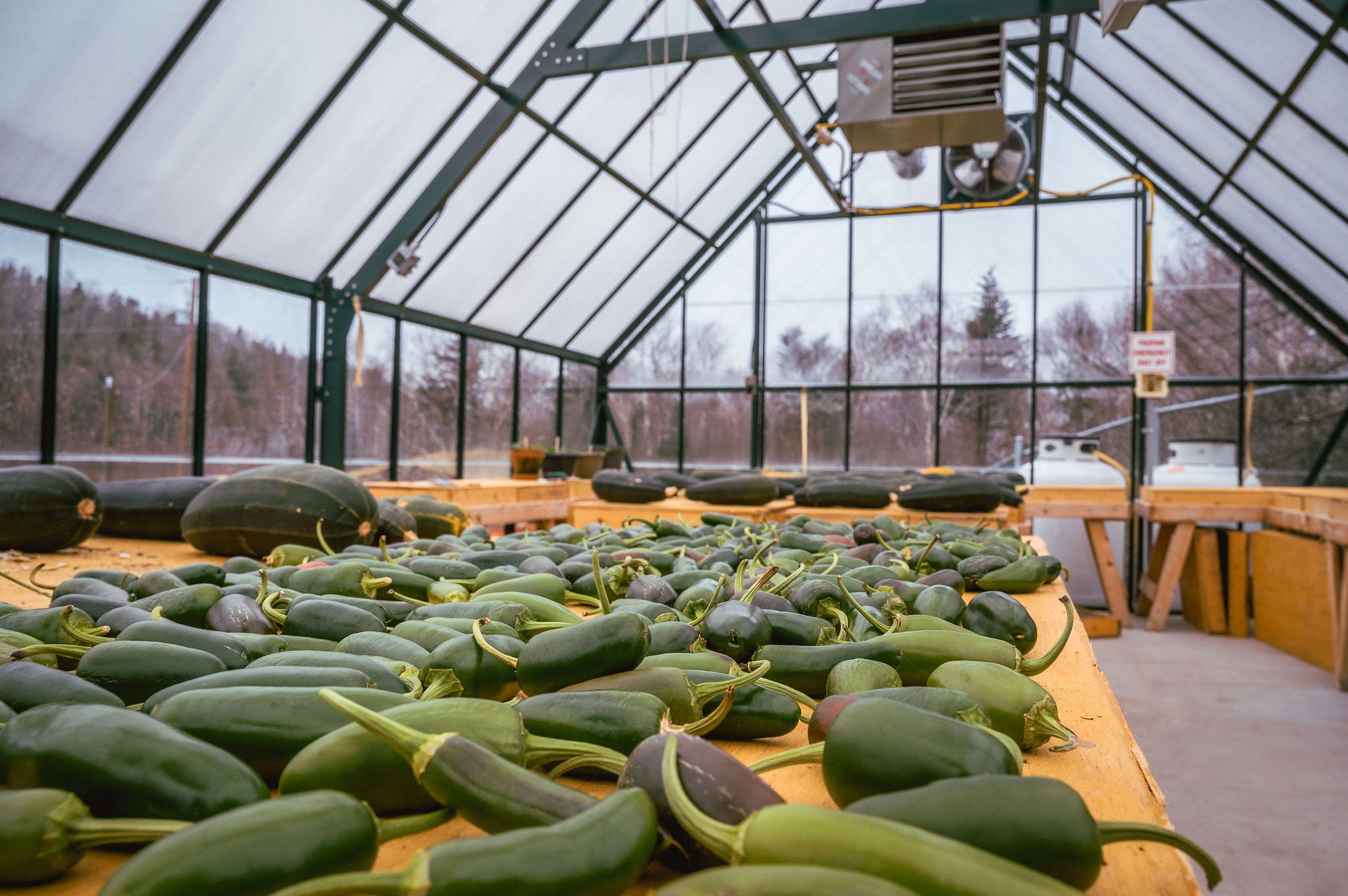 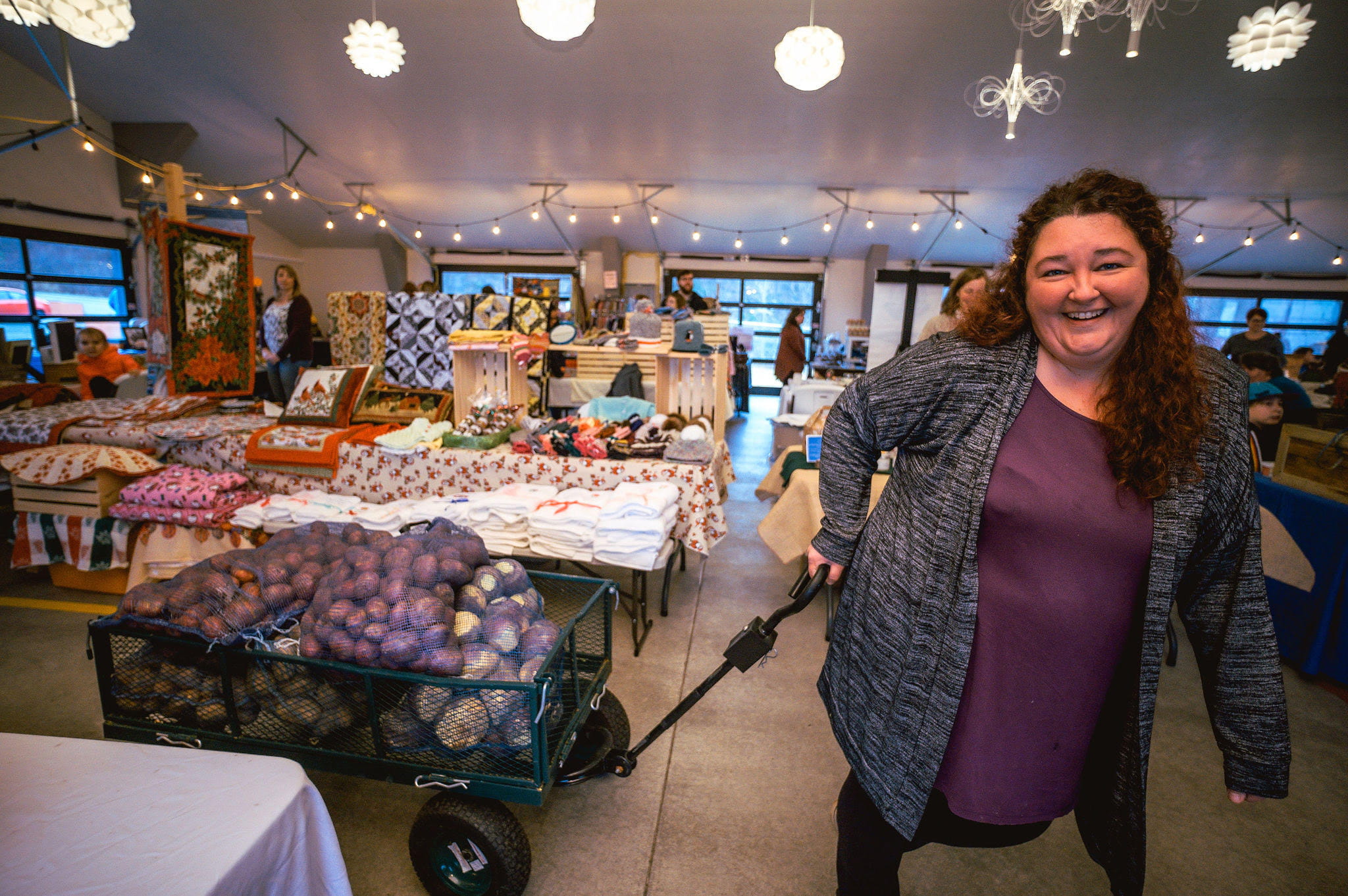 Krista Chatman, owner of Three Mile Ridge Farm, uses a greenhouse to grow staple vegetables that Newfoundland and Labrador farms are traditionally unable to grow. She sells these goods at the Clarenville Farm and Market, helping locals cut down on their food miles.

By improving access to staple produce that would otherwise be carted in, Chatman has reduced food miles for local restaurants and residents alike.

“As farmers we’ve known for years how much food we don’t grow here, and we know it doesn’t have to be that way,” she says.

The Farm and Market started four years ago and has since become a must-visit for local chefs, event organizers and caterers. As part of her work, Chatman mentors up-and-coming young farmers, bringing in the next generation of food producers.

“We definitely want to encourage local businesses to thrive. Our palates are changing, we’re learning to eat seasonally,” she says. “There’s real opportunity to be part of a shift.”

Farmers and foragers can barely keep up with demand for their products; chefs are changing the scope and expectations of local food almost daily. For anyone involved in the industry – and those who travel from near and far to enjoy it – it’s an exciting time to be part of Newfoundland and Labrador’s fast evolving cuisine culture.

As Chatman says, the brightening spotlight on the province’s food scene comes from hard work, creativity and a love for place. “But really,” she adds, “none of this would work if it all didn’t taste so good.”