Growing up in Newfoundland and Labrador, one of the fondest memories as a child was heading out to my Grandmother’s house for Jiggs’ Dinner. For those of you who don’t know, Jiggs’ Dinner – also known as “boiled” or “Sunday” dinner – is a traditional meal that consists of salt beef, turnip, cabbage, potato, carrot, pease pudding, and more often than not, some kind of dessert. Our Jiggs’ Dinner, on both sides of the family, included a turkey.

As a kid, you don’t necessarily think about the work that goes into these meals. You just show up and dig in. There is little thought about the process of preparation. It’s a ritual that has taken place inside kitchens of this province for generations.

In light of my ignorance to the whole affair, and with the holiday season coming on, I thought it would be interesting to see what it was all about. I mean, “boiled dinner,” how hard could it be?

As it turns out. Harder than you might think. 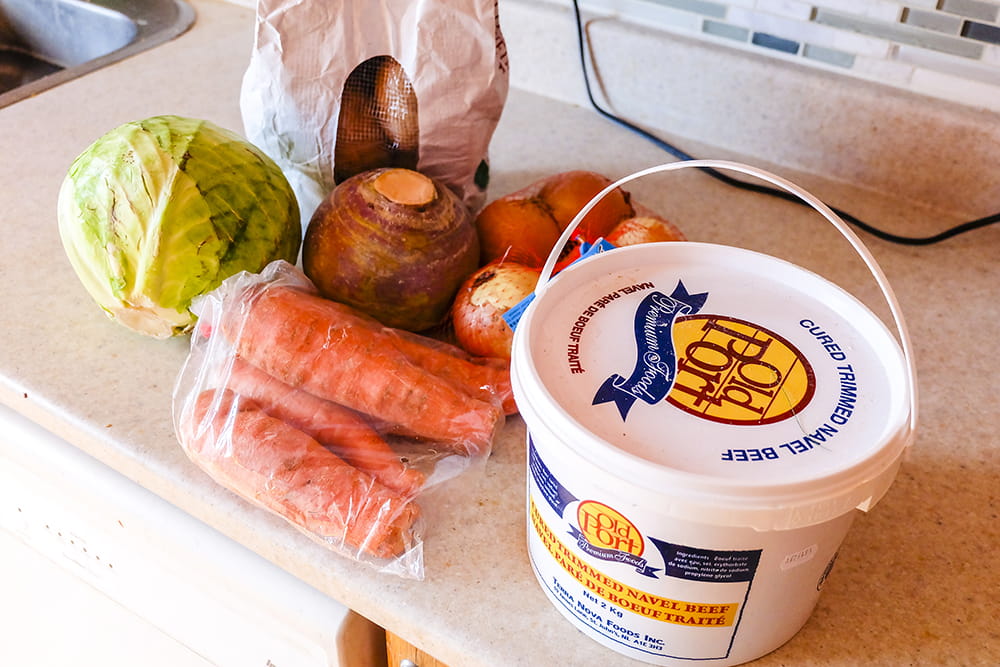 I began my culinary adventure at the store. But not just any store – Belbin’s Grocery.

Belbin’s has been a staple in St. John’s since 1943, when Robert Belbin and sons opened their living room up to prospective customers. To this day, the shop is still going strong, offering a wide variety of locally grown vegetables and meats.

It was important to me to make this meal as traditional as possible. I don’t own a farm, sadly, but I wanted to ensure that the ingredients used were as fresh as possible. I managed to track down some locally grown carrots and turnip from Foxtrap, as well as a locally farmed turkey from Noel’s Turkey Farm in Carbonear.

Perhaps the key ingredient of any Jiggs’ Dinner is the salt beef.

Now, here is where I have to level with you. I’m afraid of any meat that comes in a bucket. So afraid, that I’ve always steered clear of it. However, for the purposes of this adventure I’m going to bite the bullet and eat my first ever piece of salt beef. The beef is cured and packaged locally at Terra Nova Foods here in St. John’s. Terra Nova Foods, it should be said, are a lovely company and in no way have anything to do with my irrational fear of salt beef.

Now that I had everything I needed for my foray into Jiggs’ Dinner, the first thing to do was to thaw the turkey. Typically, the best way to do this is to leave it in the fridge for a few days – however, I forgot. So, the immersion of the turkey in cold water will have to do.

After much research online I discovered that the rate of thaw when using this immersion technique is a half an hour per pound. I was working with a ten-pound turkey, so using my rudimentary mathematical skills that meant it should have been thawed within five hours.

It was not. I had hit my first snag. The outside was thawed, but the insides where the neck and gizzards are kept were solid as a rock. Dinner was scheduled to begin at three o’clock. It was now ten in the morning. Not a great start.

I elected to leave the turkey defrosting in the pan for a bit and moved onto the pease pudding. I left the peas soaking in a cast iron wok last night. Not exactly traditional cookware, but you use what you have at hand.

Once the peas have expanded I take them and put them inside what is known as a pudding bag. A cloth bag that comes equipped with a piece of twine to tie at the top. It was as simple as filling that bag, twisting it, and tying it off. We’ll come back to that. 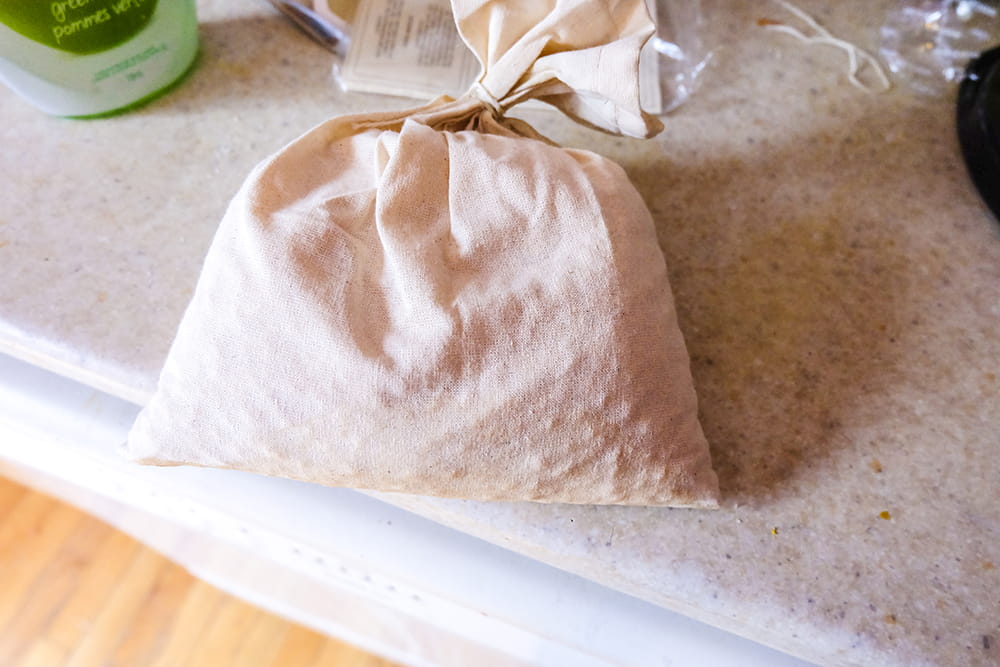 After that I checked the turkey. Still solid inside, absolutely nothing moving. I was not impressed.

I elected to move on to the other pudding – blueberry, also commonly known as blueberry duff. 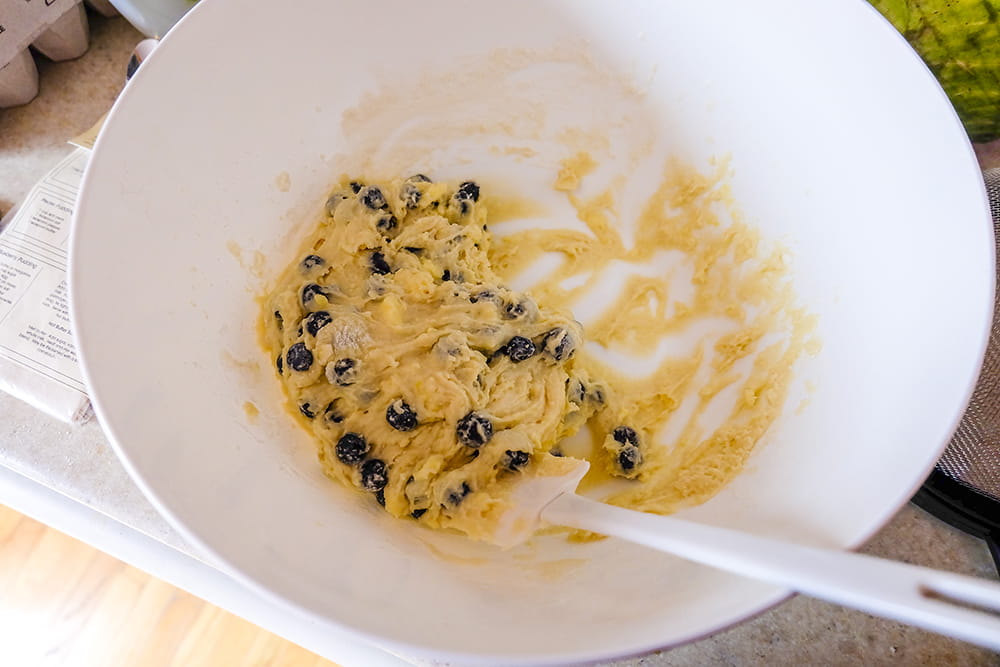 This was pretty simple. Some butter, sugar, flour, baking soda, milk, and an egg for the batter – mixed well in a big bowl. Then flour some blueberries and fold them in. It was quite a workout on the arms, the mixture got quite thick. Once everything is mixed you then place it in a pudding bag, twist, and tie the top.

That’s when it hits me. The salt beef – I didn’t soak it overnight. So, I immediately take out a few chunks – nose slightly turned – and begin cutting them down into smaller chunks. I bring a giant pot of water to a boil and toss them in. I wasn’t afraid of the salt content; a woman I met in line at Belbin’s had told me how to fix the problem.

“Don’t forget to drain off the water when you’re boiling the salt beef, it won’t be as salty,” she said. “Just keep changing the water and you’ll be grand.”

That’s the thing about Jiggs’ Dinner. Everyone has a method to the madness. Strangers were offering suggestions, so were coworkers and friends. My Mother was even involved. Full disclosure: my Mom makes the best Jiggs’ Dinner I’ve ever tasted. So, no pressure.

The one thing people kept warning me about were the potatoes.

“The potatoes. Don’t mess them up. They’re easy to mess up,” said one coworker, “the potatoes are tricky.”

Those were the words that were running through my head as I peeled all the vegetables. I had time to kill, it would appear the turkey was frozen in the belly of a glacier and therefore needed twice the allotted time to thaw.

I waited another hour for the turkey. Until finally I had had enough. I reached inside the cavity and with all my might wedged the neck free. It took considerable effort. Once the neck was free I placed it in a pot and began to slowly boil it with the gizzards. This stock would later be used for the gravy.

In a small bowl I mixed butter, minced garlic and some olive oil (to prevent the butter from burning.) I then pushed the mixture beneath the skin of the turkey quite liberally. This will make the turkey nice and moist.

Then it was time for the most important part of any turkey – the stuffing.

Usually when cooking poultry I use aromatic herbs and citrus, but because this is a traditional meal, I did what any young man would do, I called my Mommy.

“Take your breadcrumbs, you’ve got breadcrumbs, right?” She asked, expecting the response to be one of confusion.

“Oh, ye of little faith,” I said, “of course I have breadcrumbs.”

“Well, you take your breadcrumbs, put ‘em in a bowl, dice up two medium onions, melt about a quarter cup of butter, put that in – and you’re good to go,” she grinned.

“What about the savory?” I asked.

“Right, the savory, take a handful of it and rub it between your hands over the breadcrumbs, make it nice and fine. Then put that in the cavity of the turkey, and you’re all set,” she said. 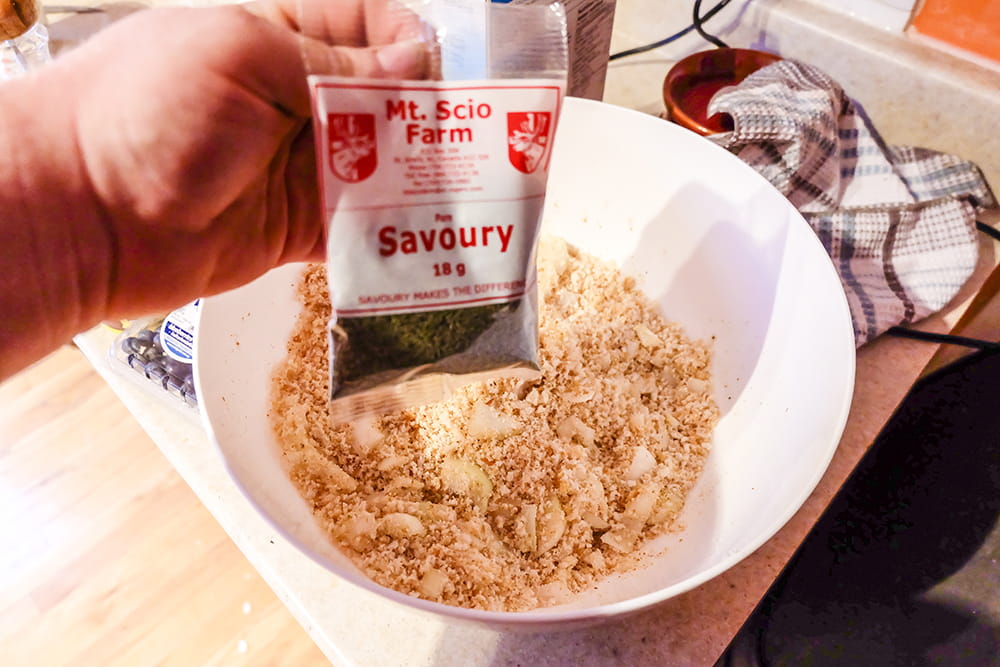 What would we do without our mothers? Starve probably.

So once the turkey was stuffed, I gave it a smack on the backside and shoved it in the oven at three hundred and twenty-five degrees. A turkey typically cooks at fifteen minutes a pound at that temperature, but I went to eighteen minutes to account for the frosty insides.

With an hour left remaining in turkey time I threw the two bags of pudding into the pot. Then waited an additional half an hour before adding all the vegetables.

Jiggs’ Dinner is a lot like comedy; it’s all about the timing. And seeing as how this is my first time cooking it, I was banking on a little bit of luck in the final result.

Once the turkey was finished I plucked it out and laid it to rest beneath some foil on the counter, and then began removing the vegetables. 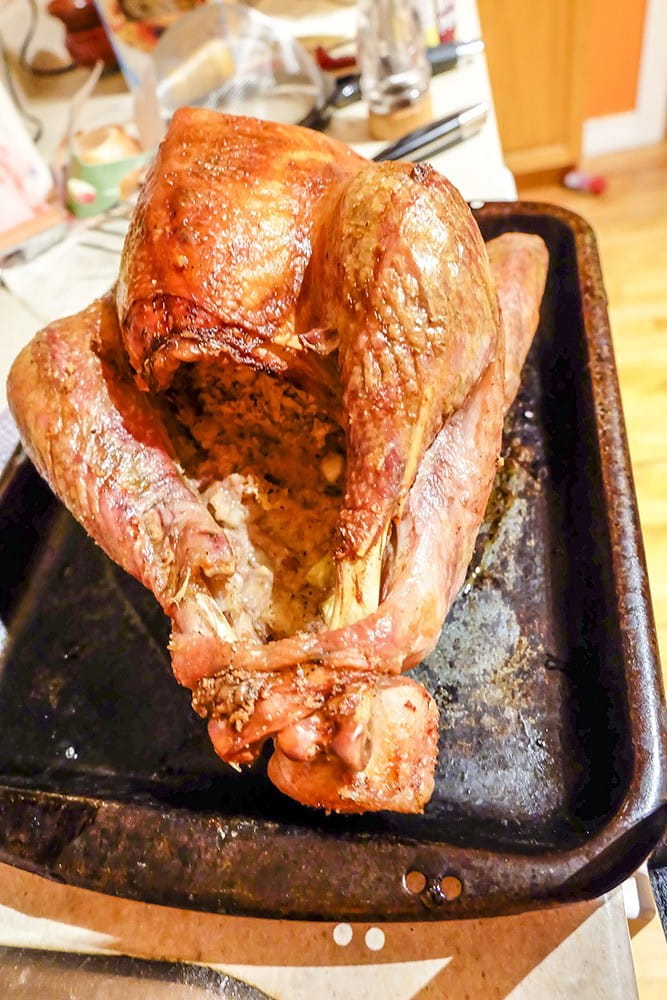 I emptied the pease pudding bag into a bowl and mashed it with some butter and salt and pepper for taste. 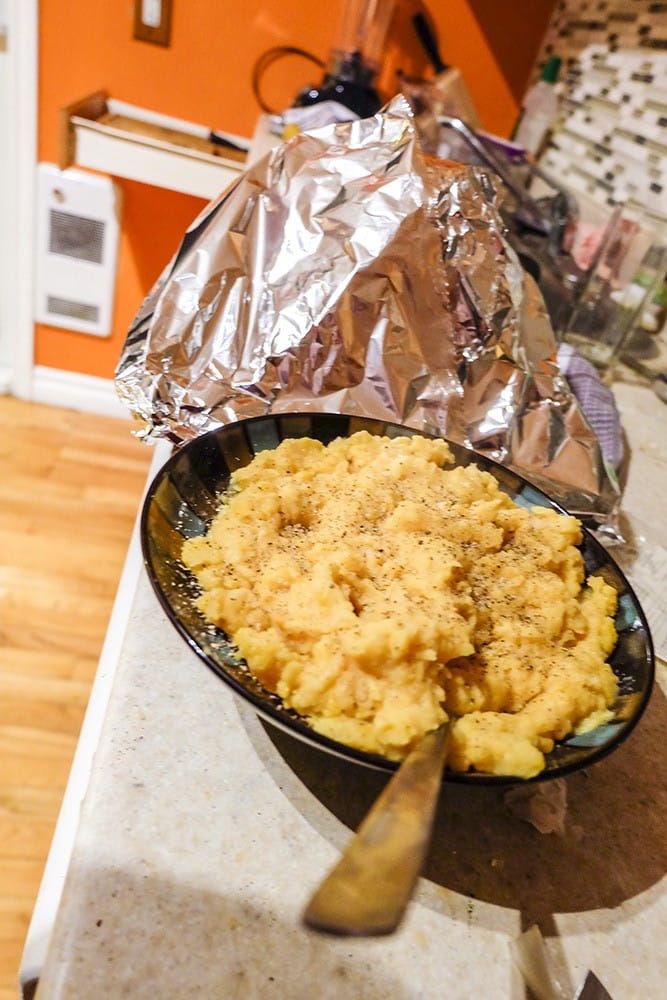 I removed the blueberry pudding from the bag, and laid it on a plate to cool. I have to confess, I may have nibbled a little… just a little. 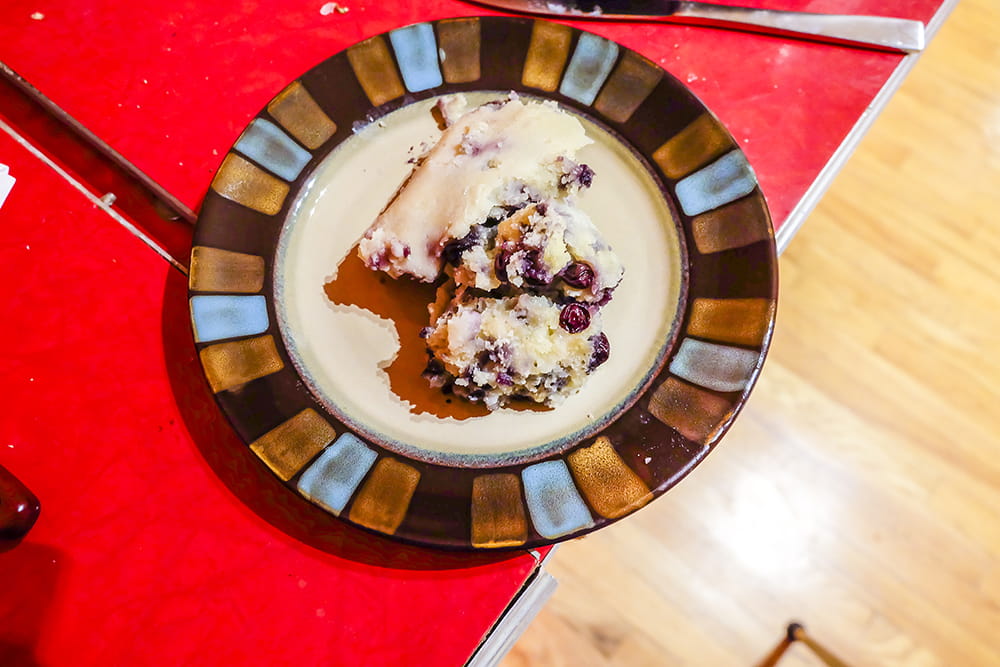 And finally, plated the vegetables, cut up the turkey and before you knew it, I had my very first Jiggs’ Dinner lying before me. 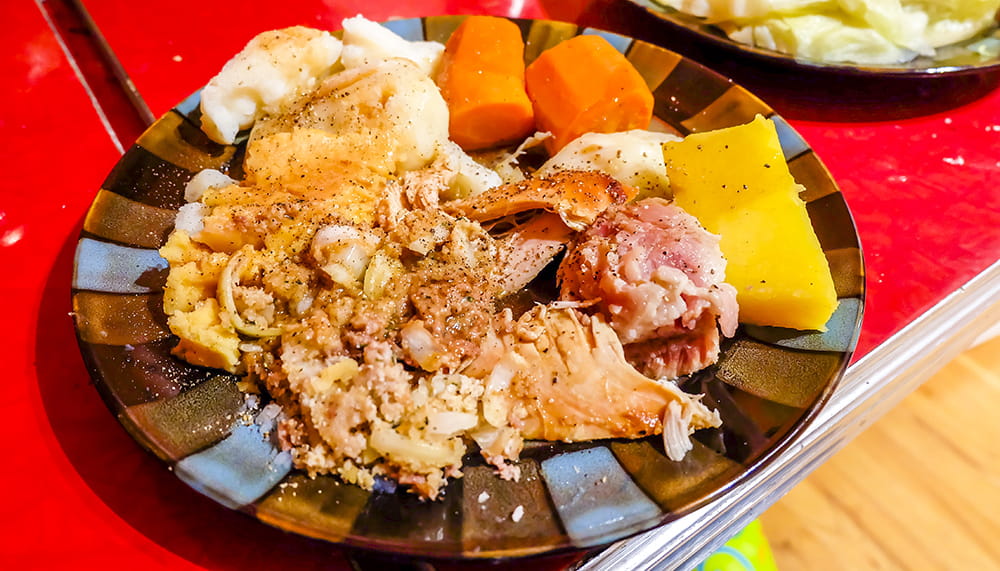 It was 7:30. Four and a half hours after I said it would be ready. But, it was ready. And that’s the main thing. And, it was delicious. Apart from the gravy, that was a bit of a disaster.

After finishing the meal with some friends and family, I sat back on my couch watching the snow fall on a downtown street. I thought about the amount of work that went into the meal. I thought about the whining I did intermittently throughout the day to my girlfriend. And then I thought of my Grandmother, a woman who raised sixteen children on the back of dinners like this one. A woman who made her own bread, day in and day out. A strong woman with heart, who didn’t complain when she was tired, who didn’t whine because she burned her thumb on the turkey pan. A woman who taught my Mother how it should be done, and in turn, she taught me.

Jiggs’ Dinner is more than a meal. It’s a story. A tale floated down throughout the generations. A commonality we all share. One we continue to share to this day.

So, as we move into the Holiday season, just remember, everyone has their own way of making it – their own tale. This one was mine. And I learned it from two very strong women, both of whom I appreciate just a little more after having done this.

Oh, one last thing, for your information – the salt beef was wonderful, and the potatoes were absolutely perfect.