With all these icebergs cruising the coast of Newfoundland and Labrador, maybe it’s a good time to learn something about these 10,000-year-old behemoths. 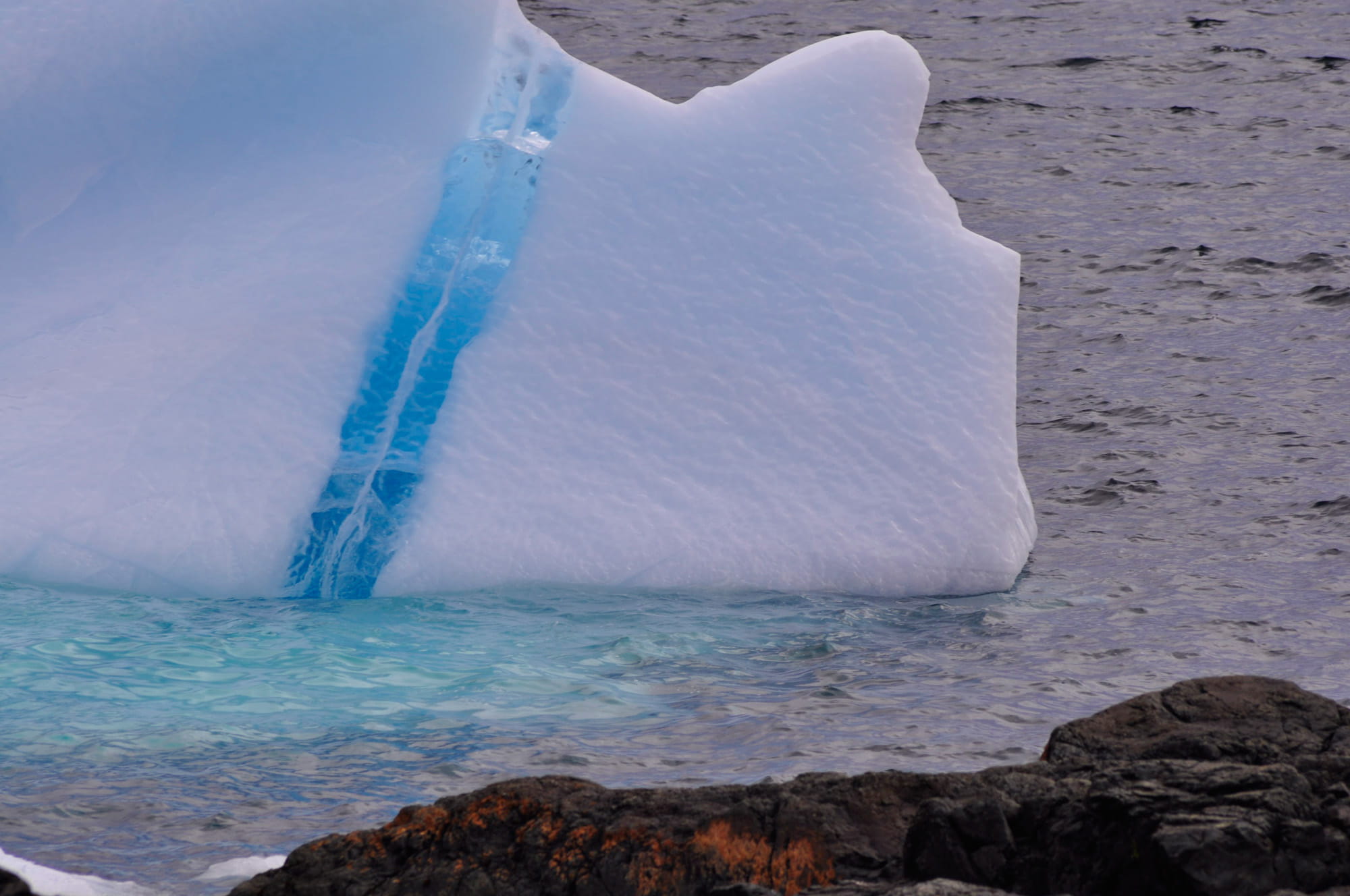 Where do icebergs come from?

90% of icebergs seen off Newfoundland and Labrador come from the glaciers of western Greenland. The rest come from glacierson islands in Canada’s Arctic area.

How do icebergs form?

Icebergs are edges of glaciers that have broken off and slipped into the ocean. Glaciers form on land by snow building up overthousands of years. Each layer of snow compresses those below until, 60 to 70 metres down, glacial ice forms. Glaciers then "flow"or "creep" towards the ocean under their own weight, and eventually slip in. The glaciers of western Greenland flow at speeds of up to seven kilometres a year, among the fastest moving in the world. After slipping into the ocean, the bergs float in frosty arcticbays melting slowly, if at all, until passing through the Davis Strait and into the Labrador Current which carries them south into Iceberg Alley. Once they head south, they rarely last more than one year.

How many icebergs are there?

Every year about 40,000 medium- to large-sized icebergs break off, or calve, from Greenland glaciers. Only about 400-800 make it as far south as St. John's, but these numbers can vary greatly from year to year. The chances of seeing icebergs in a particular areadepend on the number of bergs, wind direction, oceans current and temperatures, and the amount of sea ice, or pack ice. Sea ice protects icebergs from the battering of waves and helps them last longer. Years of little sea ice cover are often years of few icebergs along Newfoundland’s coast. Also, there may be areas where you can’t see any, but 100 kilometres up the coast there might be dozens, so be prepared to travel around. And remember that icebergs are constantly on the move.

How old are icebergs?

What causes the streaks and colours in icebergs?

As glaciers creep over land, melt water fills the crevasses and later freezes, creating clear, bubble-free ice. This shows up as bluish streaks in icebergs because of the light scattering characteristics of pure ice. Sometimes airborne dust from volcanic eruptions, or the wind, falls on a glacier and becomes trapped inside, forming a noticeably darkened brown or black layer. But because most volcanoes are south of glaciers and winds from the south rarely mix with Arctic air masses, there are very few pollutants in the ice. 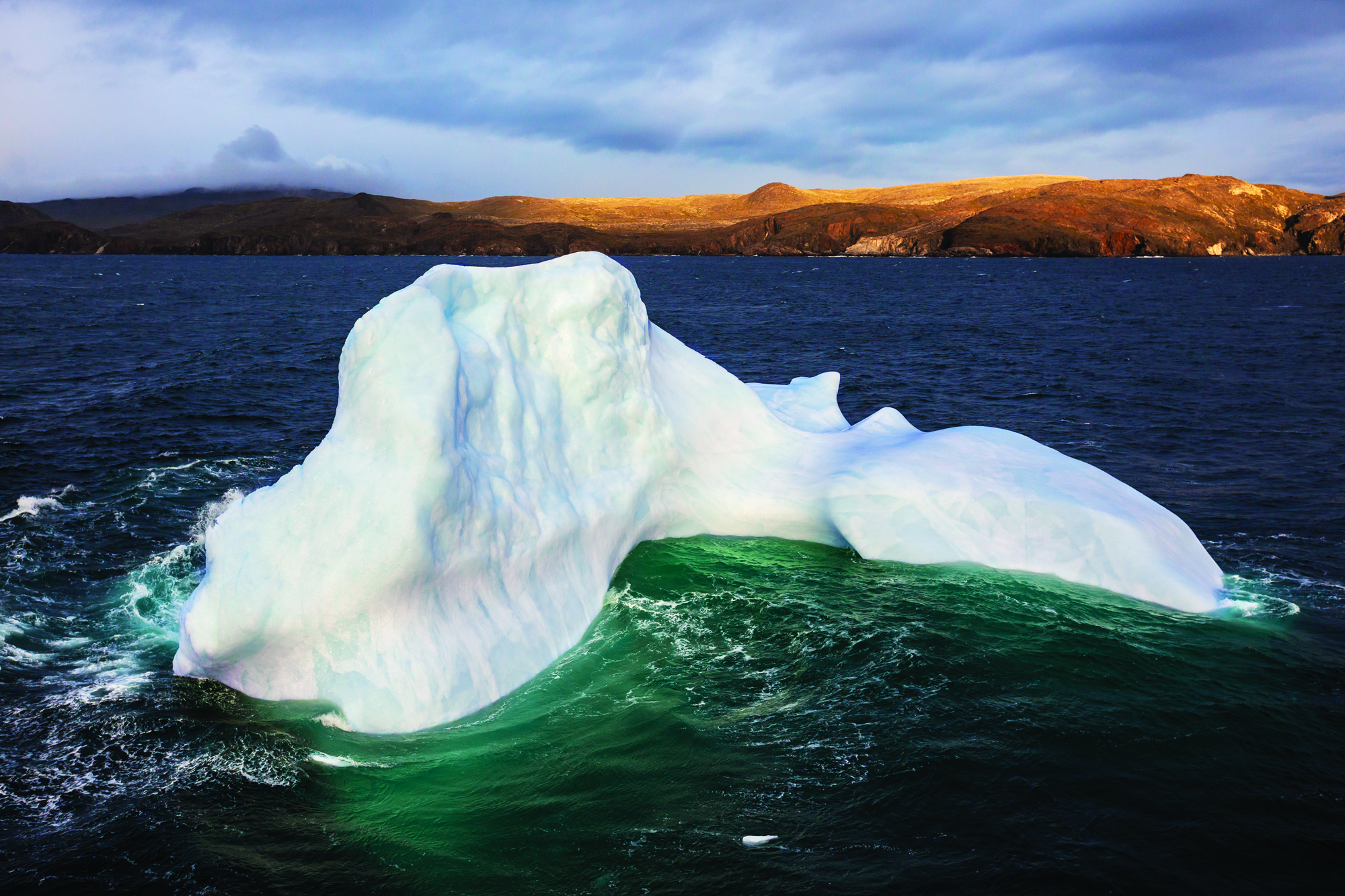 How pure is iceberg ice?

No. Icebergs are created from pure, fresh water and snow.

How fast do icebergs move?

Icebergs don’t have a consistent speed. The size and shape of an iceberg, ocean currents, waves, and wind all affect its speed, and because of these forces often travels an irregular path that’s two or three times the straight line distance it drifts south over a week or so. The average drift speed is around 0.7 km/h, although speeds greater than 3.6 km/h have been recorded.

How much of an iceberg is below water?

Almost 90% of an iceberg is under water, hence the phrase “tip of the iceberg.” Its maximum width under water is 20% to 30%larger than you can see at the surface. The average depth, or draught of an iceberg, is slightly less than its apparent length above water.

How much do icebergs weigh?

Icebergs can vary greatly in size, ranging from very large – greater than 10 million tonnes and hundreds of metres long – to large,medium, and small bergs. The smallest are termed “bergy bits,” which are the size of a small house, and “growlers,” which are the size of a grand piano. These smaller pieces are hazardous to ships because radar may not pick them up as they bob up and down among the waves. The average weight for a Grand Banks-area iceberg is 100,000-200,000 tonnes - about the size of a cubic 15-story building. 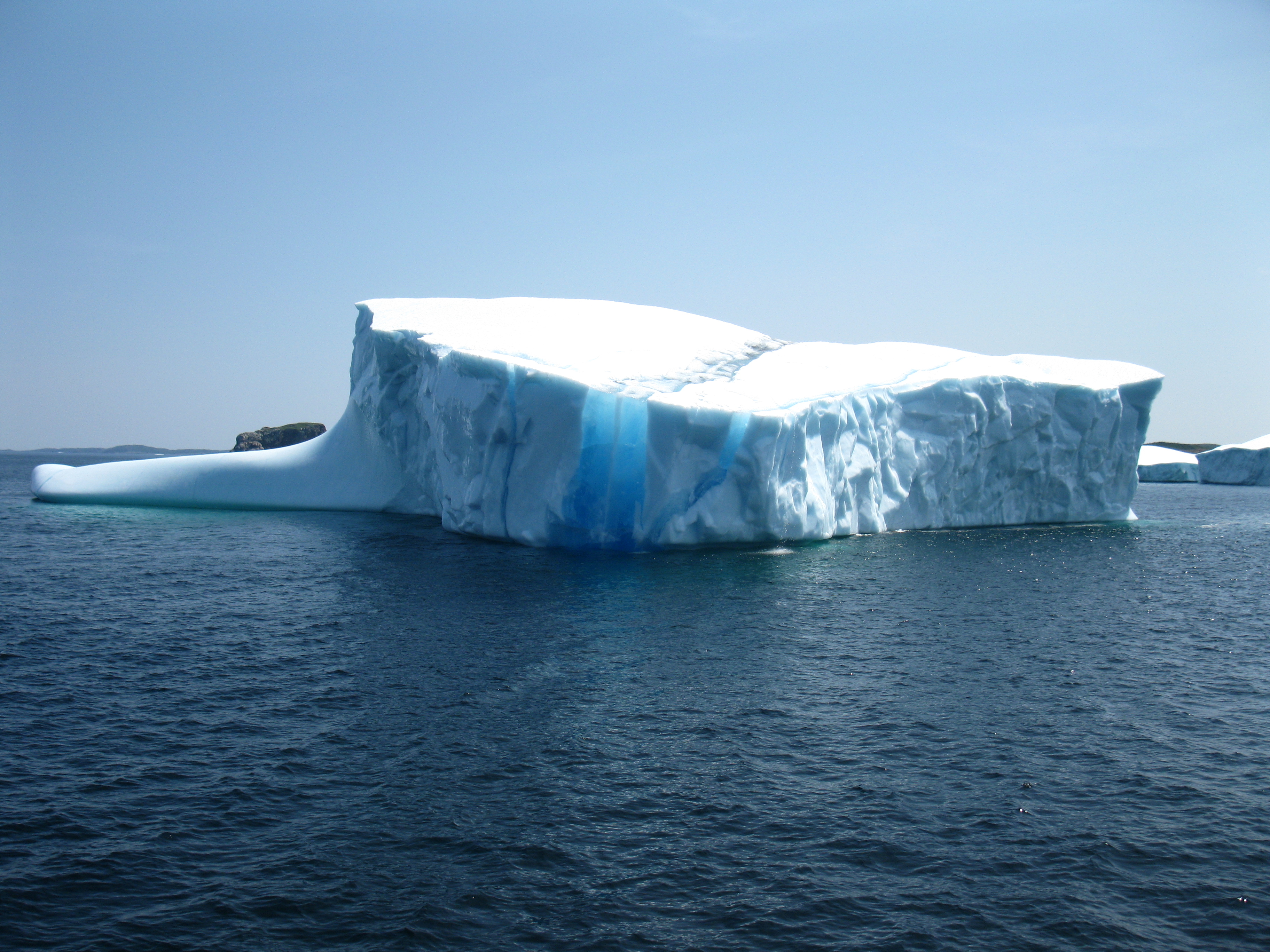 What is the largest iceberg recorded?

In the Northern Hemisphere, the largest iceberg on record was the Petermann Ice Island of 2010 through 2011. The behemoth was 4 times the size of Manhattan and spawned from a remote floating glacier in north-western Greenland the first week in August of 2010, but it quickly broke into at least 3-4 very large pieces.

Icebergs are often very unstable. The random shape combined with the varying degrees of melting and breakup means they can tip or roll suddenly. Generally, the most stable icebergs are tabular, while domed- and wedge-shaped bergs may roll completely over in seconds without any apparent reason.

How hard is iceberg ice?

It’s about 10% as strong as concrete. This may not seem very hard, but it’s a lot harder than ice your make in your freezer. A ship colliding with an iceberg almost certainly means disaster due to the enormous momentum involved and potentially massive contact region. The ice can literally generate hundreds of tonnes of force on a ship’s hull, causing it to buckle, dent, crumple, and even tear apart.

Do icebergs hit the bottom?

Yes, icebergs often "ground" or reach the seabed and get stuck. This happens when fluctuating tidal currents or strong winds bring icebergs close to shore or onto shallow areas like reefs. At times, icebergs "scour" the ocean floor, creating irregular troughs that can be several kilometres long and up to half a metre deep. The Grand Banks are criss-crossed with iceberg scour marks, both recent and decades old.