In the late seventies, Donna Butt brought together a group of performers to form a new and exciting theatre troupe in the heart of St. John's. Today, she's a member of the Order of Canada and a Newfoundland and Labrador Artist of the Year recipient, and her company has toured the country with works satiric and smart, sentimental and significant. 2018 is a year of anniversaries for Rising Tide Theatre; it's been forty years since they formed, and twenty-five since they officially settled in the small outport of Trinity, Trinity Bight, on the Bonavista Peninsula.

This picturesque village maintains its historical features. From the beautiful churches to the merchant houses, heritage homes, the authentic Green Family Forge and, of course, the Rising Tide Arts Centre. Built on Green's Point in 2000, the large-scale building has become a focal point in the community, and when you step through their doors into the wide-open theatre space you can almost hear the history echoing off the walls. Not just the nearly twenty years of productions housed there, but the site itself and its rich fishing history; this was (and is) a place of work, of play, of laughter, and love.

Rising Tide's first Trinity production, and still the jewel in the company’s crown, was the New Founde Lande Trinity Pageant or, as it's called around here, quite simply, “The Pageant.” This walking tour premiered in 1992, dramatizing the history of the area and became the anchor event in the formation of a theatre festival the following year. That festival turned twenty-five this summer, hosting numerous revivals of classic Rising Tide productions alongside newly commissioned work. All playing to their usual audience of approximately 20,000 per season.

Around here, you can feel the change when Labour Day hits; the warm fall wind that whips down over Gun Hill Trail and the leaves just showing the first taste of turning. People start to slow down; not to hold off the advance of fall, but to relish the last few weeks of greenery. To take in the stillness of the Trinity sea and the beauty of the sunsets. The visitors all agree, this place in fall is just as charming as it is in the heart of the summer.

In the early days this would mark the end of the festival but for several years now, Donna will select a core group of theatre artists to stay behind. This smaller cast may hang up their Pageant shoes, but they continue to tread the boards of the Arts Centre stage with some of the season’s smaller, but no less dramatic productions, playing for appreciative crowds that grow every year.

This year, three stellar productions are being held-over for Rising Tide's fall audience. The first is a piece of theatre by one of our earliest and most prolific playwrights, Michael Cook's Terese's Creed. Here we see a tribute to the hard-working women of Newfoundland and Labrador and their indomitable spirit. Terese reflects on her husband, her children, and her life, as her laundry feeds forth from a gleaming white wringer washer. And as she lays her clothes out to dry, so too does she lay out her story; one of sadness, laughter, joy, and hope. Terese's Creed is a one-woman show with a tour-de-force performance by Artistic Director Donna Butt herself. And, as the program states, “She'll make you laugh, she'll make you cry – she might even make you wring out the laundry.”

Saltwater Moon by David French is certainly no less a classic. No stranger to the festival but a new addition to this season, this is a timeless tale of love and hope that plays out on a porch in Coley’s Point on a moonlit September night. Mary Snow is waiting for her fiancé, Jerome, when her former beau, Jacob, appears after months away. He’s heard of her engagement and is determined to win her back. It won’t be easy though. Hurt feelings and old wounds stand in the lovers’ way and it’ll take more than silk stockings brought back from Toronto to close the gap between them. Funny, charming, and full of heart, this snapshot of 1920s Newfoundland and Labrador will bring a smile to your face and a tear to your eye.

Playing alongside these classics is a new work commissioned by Rising Tide Theatre that had its premiere this summer season. It is a play by one of the finest modern writers to come out of Newfoundland and Labrador. Her stories resonate with wisdom, imagination and her unique voice. The Blue Castle by Meghan Greeley places us in the middle of the Great Depression, in the Parisian-style literary salon of Newfoundland and Labrador poet, Phoebe Florence Miller. This once popular haunt of the nation's (we were a nation at that time) greatest writers, artists, and thinkers has long lain vacant. When a young poet suggests a reunion, Phoebe has no idea how the announcement he will make will turn her world upside down.

Plays run nightly in the fall season and this lineup places two classics from the Newfoundland and Labrador canon right alongside a new work, most likely destined for similar status. But the later season isn't just a time to perform, it's a time to prepare; between performances the company dedicates itself to planning. Workshops on new scripts take place and new plays sometimes find their earliest productions or readings in the fall, offering a sneak peek for visitors of works in progress. 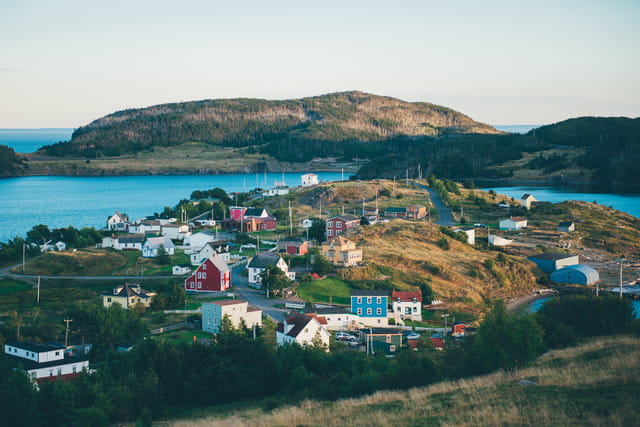 Trinity is a special place. A place where you can lose yourself in narrow laneways and historic architecture, sitting atop a land carved by the sea. Where the story happening in the theatre is only enhanced by the starry skies reflected on the calm waters as you exit the theatre and make your way back to your B&B.

Now if that's not worth a round of applause, I don't know what is.