Exploring the Colourful Murals of Botwood

The friendly, small town of Botwood in Central Newfoundland has a surprisingly vibrant artistic side: The Botwood Murals Art Society has scattered 13 large painted murals around town showcasing the vibrant history of the area, including the largest mural in Atlantic Canada at a whopping 9,000 square feet. Here, local artists and muralists from around the world come together to add splashes of colour to the otherwise blank canvases of buildings and walls, resulting in Newfoundland’s very own outdoor gallery. Be sure to stop here on your journey around Central! 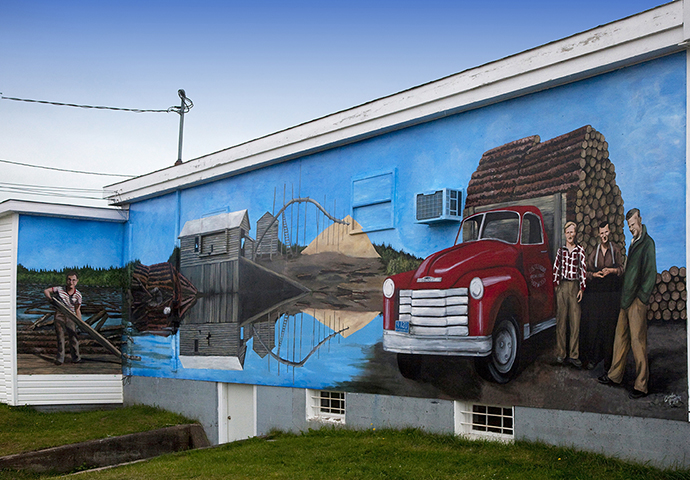 Botwood’s main industry used to be logging and pulpwood, as portrayed in this vintage-style painting of Sceviour’s Sawmill from local artist Caroline Noseworthy. The port of Botwood once shipped millions of board feet of lumber in the early 1900s to elsewhere in Newfoundland and Labrador, and sometimes overseas. You’ll find this mural on Church Road (near the intersection to Harvey Road).

These two murals depicting Botwood’s military history are at the same location in front of the Botwood Memorial. Created by Craig Goudie, these works of art honour the 432 Newfoundlanders who died at Beaumont Hamel, as well as the women and men who served in WWI, WWII, Korea, Afghanistan, and other foreign conflict. 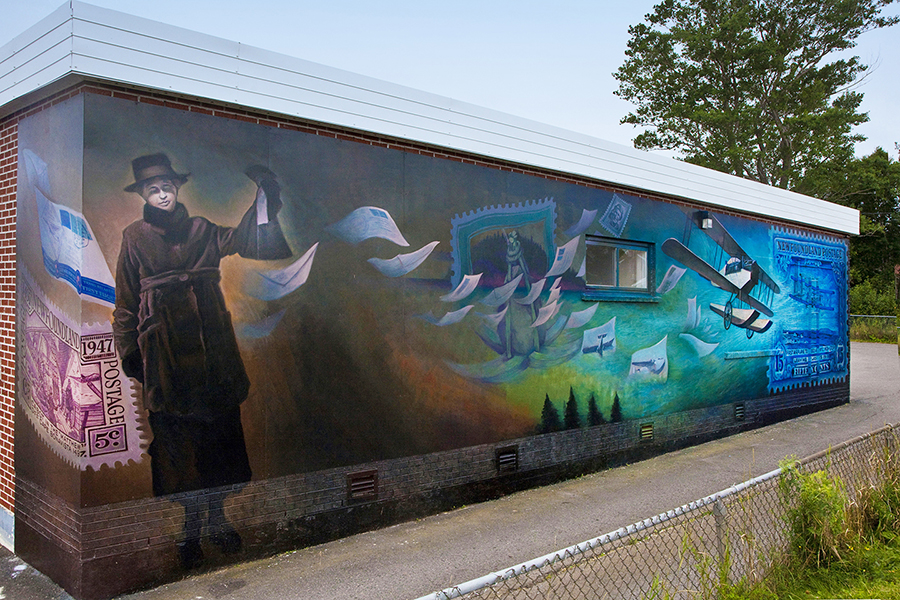 Acclaimed muralist Charlie Johnston from Winnipeg, Manitoba painted this whimsical capture of “Aunt Flo,” a notorious postmistress from Fogo Island, as she holds her mailbag resembling a light beacon. It’s a tribute to the province’s first airmail delivery in 1921 between Fogo Island and Hawkes Bay. You’ll find the mural at the most appropriate place—the side of the Canada Post building, of course!

The Pulse of the Community

Another mural from Charlie Johnston, this work of art includes a beautifully detailed portrait of local hero Dr. Twomey as he takes the pulse of the community. The Botwood Cottage Hospital was originally a military hospital set up by the Canadian Army, but it was reestablished in 1946 to serve Botwood and its surrounding towns, bringing healthcare to rural Newfoundland and Labrador. 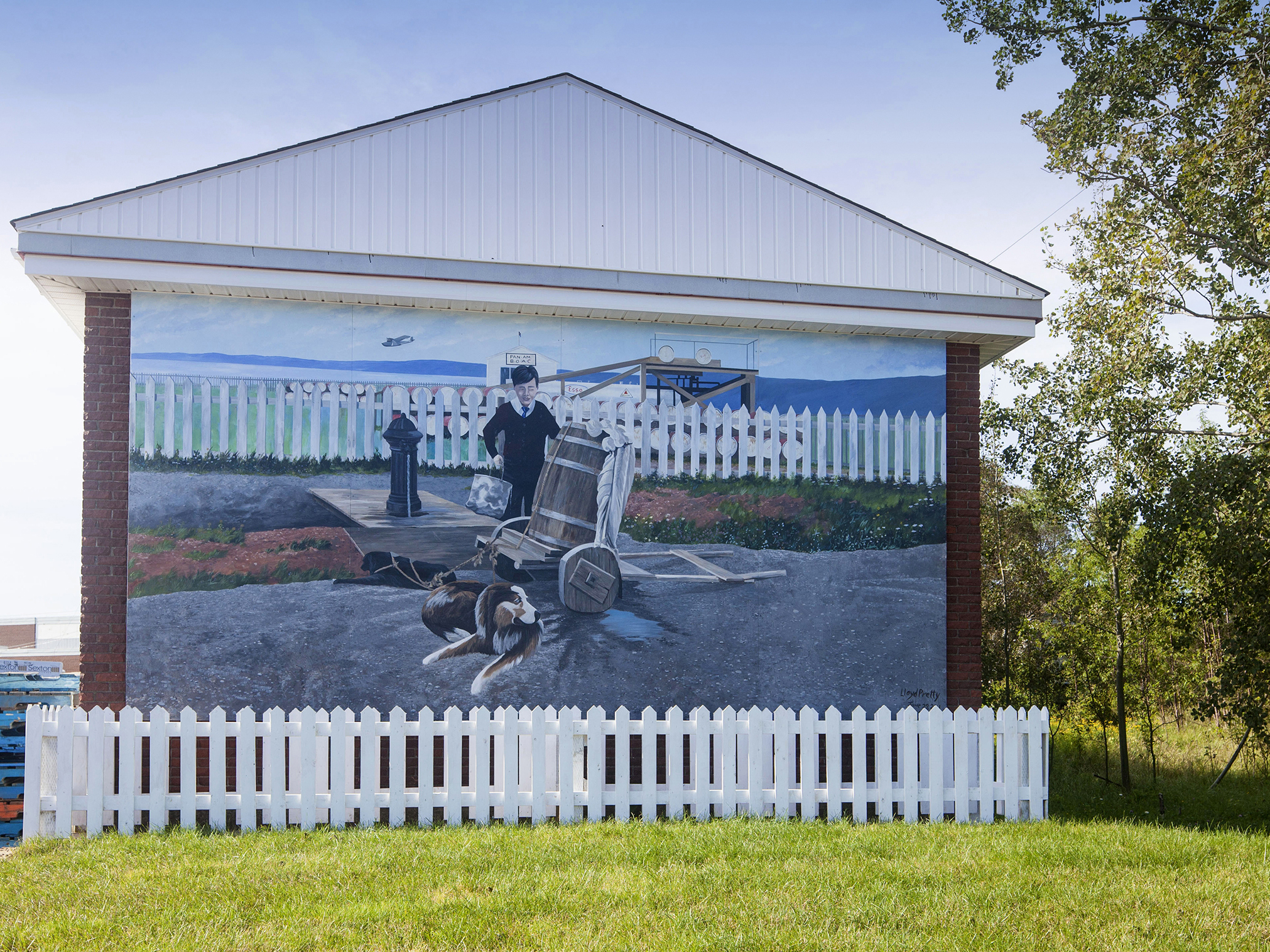 Back in 1941, Douglas Martin (a soldier who served in Botwood with the Victoria Rifles of Canada) took a photograph of a boy whose job was to deliver water to workers. The late Lloyd Pretty reproduced this now-famous photograph in mural form in 2011, and it was the first mural completed for the Society.

Argentine artist Fernanda Gonzalez Latrecchiana completed this mural featuring two men working on a railway track. The coal wharf shown here was built in 1904, but later a paper shed was added as a hub for newsprint and pulp shipping. Head to the Exploits Hostel to see this lovely piece. 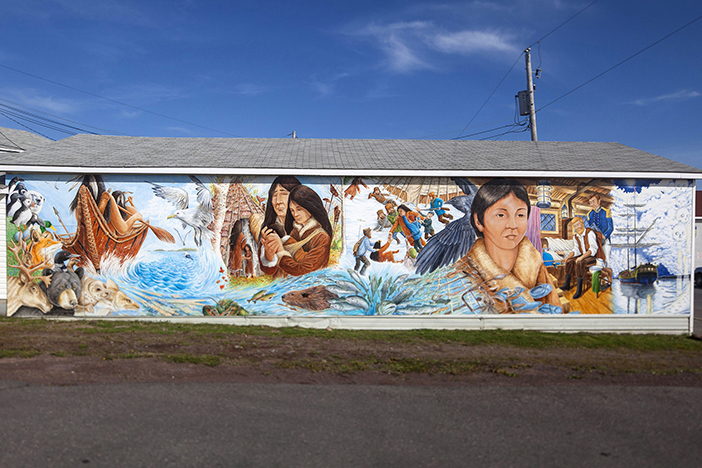 Craig Goudie’s vibrant artistic style is on full display with this mural based on Beothuk history and the story of Demasduit, a young Beothuk woman. Goudie presents a storyline of Demasduit’s later life, from her capture in 1819, the attempt to return her to Red Indian Lake, and then her untimely death on the HMS Grasshopper in 1820. Clash of Cultures is located on Water Street. (If you want to learn more about Demasduit and the Beothuk, a visit to the Mary March Museum is highly recommended.) 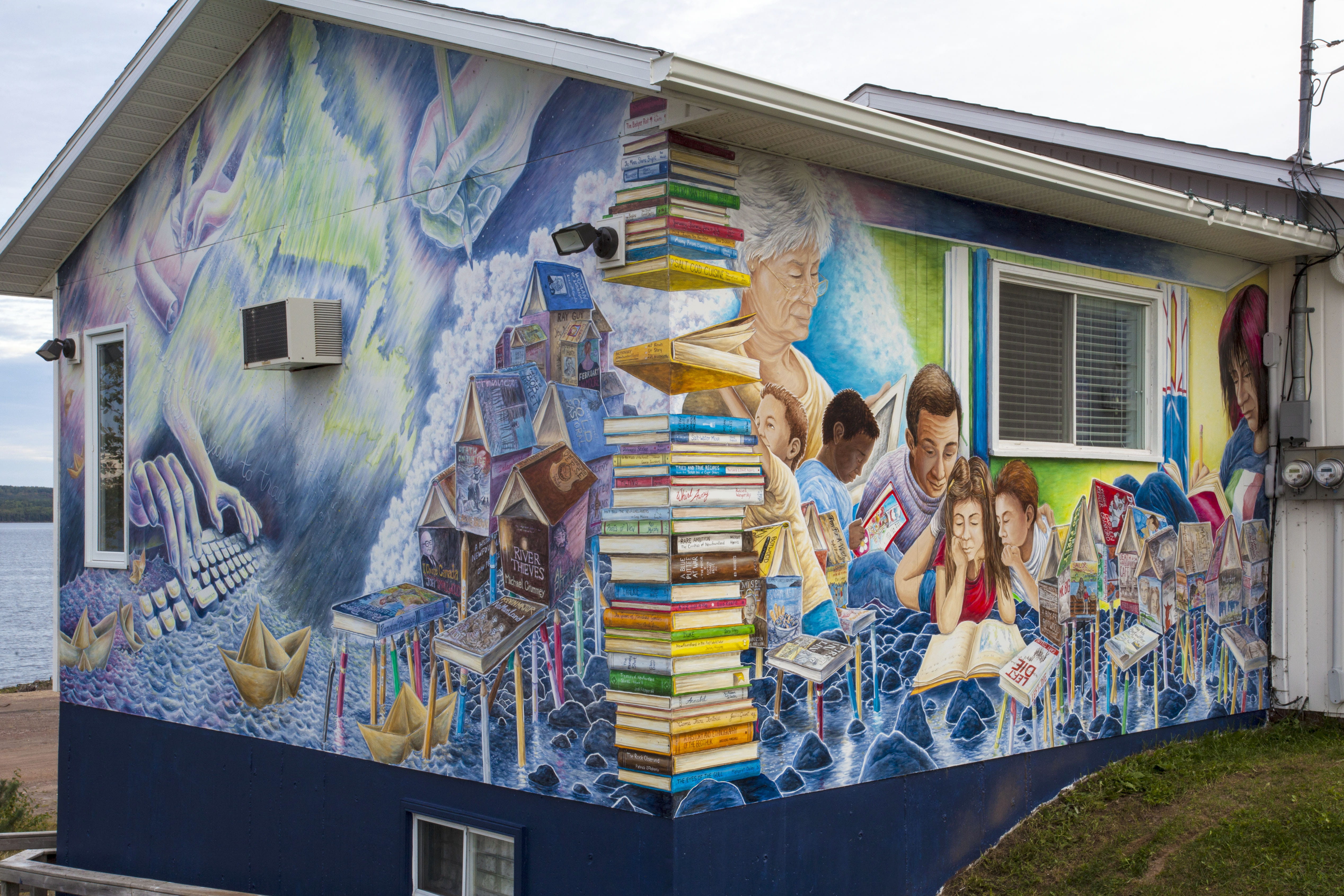 This mural by Craig Goudie at the Botwood Kinsmen Public Library celebrates the literary world of Newfoundland and Labrador. You’ll get some reading inspiration from this mural featuring 89 books, 30 of them being written by authors in the region. How many have you read? 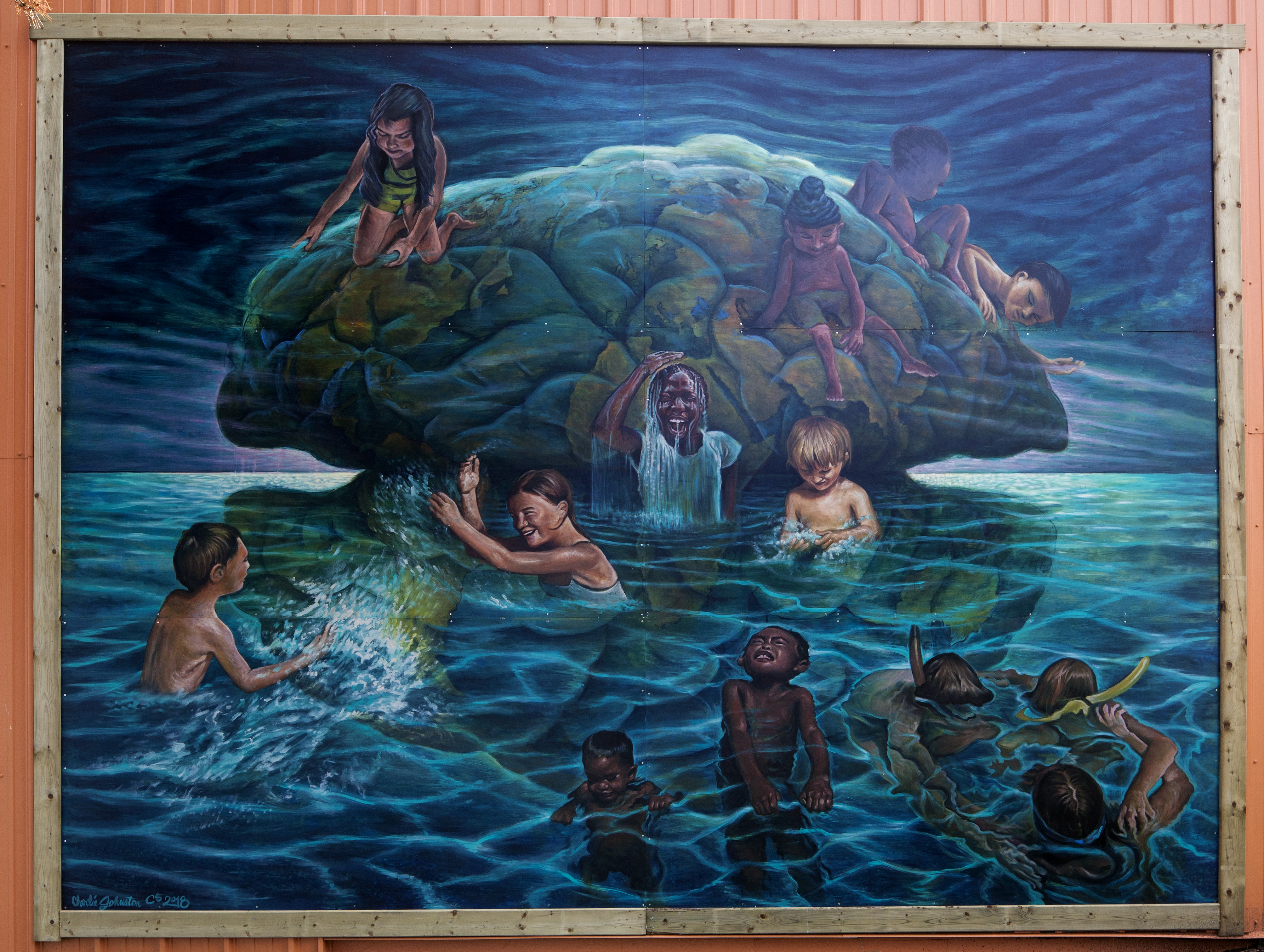 Perhaps the most contemporary of all the murals, here Charlie Johnston has created an image of children of the world gathering around a rocky island resembling a brain. As a viewer, you’re invited to consider the power of creative play and the evolution of thought. You’ll find it across the street from The Two Rs.

At the end of Circular Road, this masterpiece from Charlie Johnston of Winnipeg pays homage to the railway which reached the banks of the Exploits in 1893, thus opening up the rest of the island to the local people. For years, the railway was the main means of transportation around Newfoundland—moving both goods and people, as you can see from the mural’s portrayal of families and loved ones embracing each other as they bid farewell. It’s also the largest mural in Atlantic Canada, covering 9,000 square feet.

Marat Danilyan’s vivid depiction of first responders on a fire rescue call is a nod to the Botwood Volunteer Fire Department which has been entirely run by volunteers since 1961. Naturally, you’ll find it at the Fire Hall.

Honouring Our Fallen, Supporting Our Future 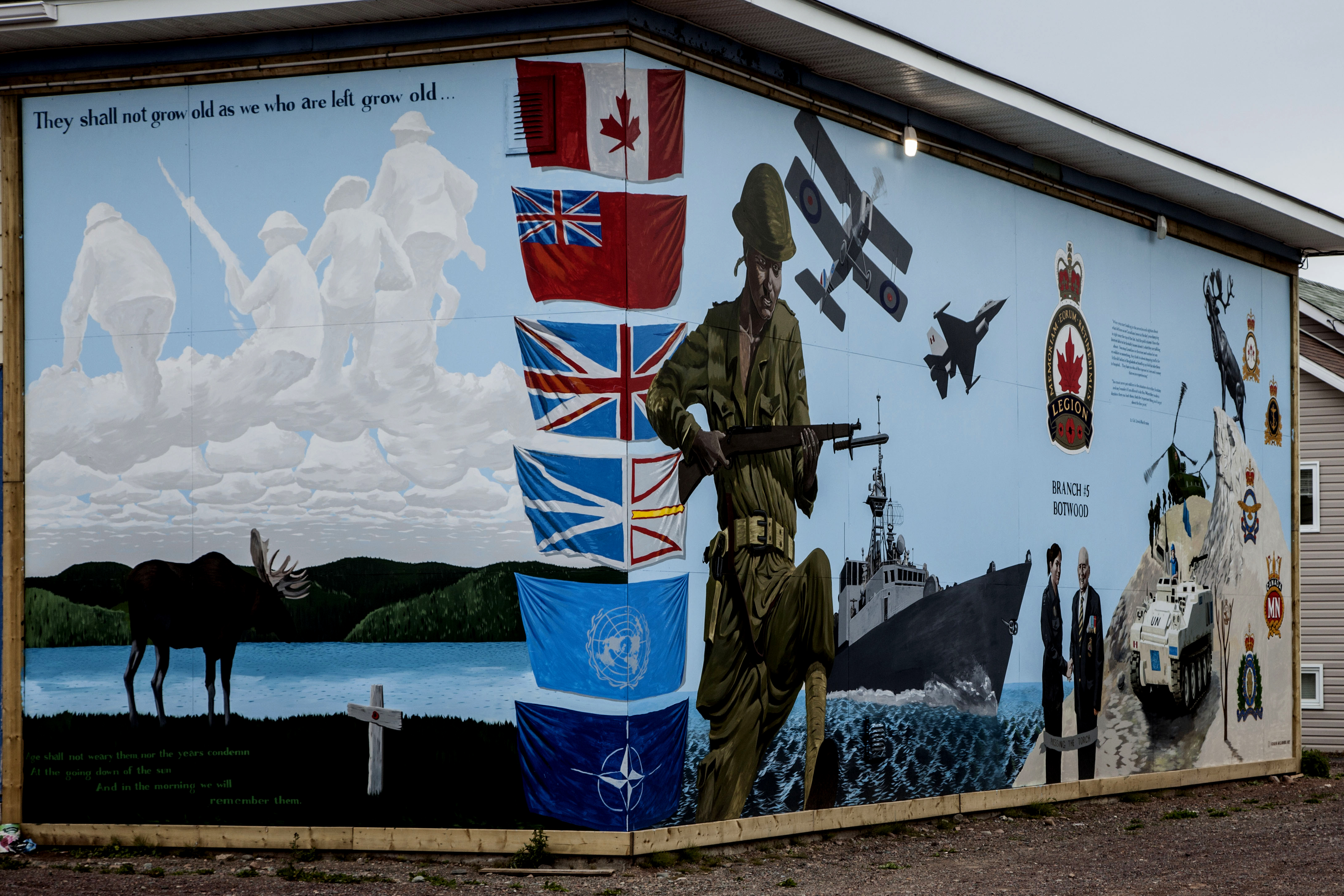 Belfast artist Ciaran Gallagher completed this piece at the Botwood Legion Branch 5, highlighting the town’s military commitments. It’s a stunning work of art to celebrate veterans and those who continue to serve in foreign conflict.

How to See the Murals

With the aid of the Botwood Mural Arts Society website and their handy map feature, you can track down these murals and dive into some Botwood history. They’re all within walking distance to one another, or a short drive.

You can also pick up a brochure or printed map at local gas stations, convenience stores, and the town hall. If you’re interested in learning more about the murals, each one is accompanied by a bilingual storyboard detailing everything you need to know.

You never know what other surprises will pop up—keep an eye out for temporary street art murals during your visit!