Explore the Discovery UNESCO Global Geopark, Half a Billion Years in the Making

There are only 5 UNESCO Global Geoparks in North America, and it just so happens that one of them is right here in Newfoundland and Labrador.

Although the Discovery Global Geopark on the Bonavista Peninsula is one of the newest UNESCO Global Geoparks, it’s been half a billion years in the making. With 10 geosites to explore, there’s a lot to take in—from 560-million-year-old fossils to dramatic sea stacks to delicately curved sea arches.

Elliston: The Perfect Home for Puffins and Root Cellars

If you had a puffin’s eye view of Elliston, you’d see that the area’s dramatic headlands were once all connected. But the constant battering of the ocean has eroded away the treeless coastline into jagged cliffs, unique rock formations, and islands—including the puffin colony’s very own sanctuary known as Bird Island.

This puffin colony is the closest to land in North America, meaning you can get fairly close to the puffins on foot. The puffins (and their pufflings!) are perfectly safe from predators on their own private island.

Puffins aren’t the only inhabitants to take advantage of Elliston’s unique geology—people do, too. This area is home to more than 130 root cellars that have been used for traditional food storage for hundreds of years. Root vegetables like carrots and potatoes were stored here, as well as jarred preserves, jams, and salt meat and fish. Some root cellars are still being used today.

The thin, flat flagstone in Elliston provides the perfect building material for these root cellars. A well-built root cellar prevents the stored goods from rotting or freezing over the winter. Their small wooden doors built into hillsides are a familiar sight all over town, looking a bit like whimsical hobbit homes set against the backdrop of Elliston’s craggy landscape.

Lined with quaint red buildings facing the sea, the seaside town of the Port Union National Historic District of Canada is the only “union built” town in North America, with a social justice history based on the vision of William Ford Coaker and the Fishermen’s Protective Union. Here, the area’s fascinating geological history lies just beneath the surface. Literally.

Port Union is home to some of the rarest fossils in the world from the Ediacaran Period, dating back to 635-541 million years ago. They prove the first appearance of complex organisms living in the deep dark sea. The catch is that you’ll have to wait until the tide is low to actually see them! From the Port Union National Historic District Boardwalk, step out onto the rocky ocean floor when the tide is out, and look for the fossils embedded in the ancient volcanic ash layers.

If you see a disc with a stem and frond-like structure on top, that’s a Charniodiscus. Keep an eye out for the cabbage-like Bradgatia too. See something that looks like a pizza? That’s an Ivesheadiamorph.

Tickle Cove: A Sea Arch and a Giant Skipping Stones

When a headland wears away to form two sea caves, eventually those sea caves become a full arch. Such is the case of Tickle Cove’s Sea Arch, an impressively large arch eroded away over the years with the help of the North Atlantic. Its colourful appearance is due to its sedimentary rock composition of red sandstone, siltstone, and conglomerates. Look a little closer, and you’ll see lines filled with quartz in the rock.

Viewing the sea arch involves just a short walk down to the beach, but there’s also a leisurely walking trail with sections of boardwalk along Tickle Cove Pond. Along the trail you’ll see erratics (boulders) deposited by glaciers. Or, if you’d prefer to imagine, the boulders were left there by a giant who used them as skipping stones tossed across Bonavista Bay.

Keels: A Walk in the Devil’s Footprints

Apparently, the devil does not wear Prada. Imprints in the rocks around the town of Keels prove, in fact, that the devil prefers to be barefoot in cloven hooves…hence the name “The Devil’s Footprints.” Local lore says that the devil danced over Keels and left these impressions behind; however, we cannot confirm nor deny this information.

The more practical explanation: carbonate nodules (“concretions”) eroded out the bedrock to form these natural cavities. But once you’ve had some time to wander around this historic little community, you’ll feel like anything is possible.

The Tip of the Peninsula: Dungeons and Chimneys

When it comes to dramatics, the northern part of the Bonavista Peninsula has plenty of it. The coastline of Cape Bonavista has one of the best examples of the Atlantic Ocean’s powerful erosive wave action in the province: The Dungeon Provincial Park.

The Dungeon was once a sea cavern with two separate openings, until continuous erosion eventually caused the roof to collapse inward. Now you can stand at the edge of the viewing platform and watch the steady crash of waves continuing their work carving out this heart-shaped crater. Grab your camera—you’ll need it for this one.

If you want to see what the future of The Dungeon looks like, head over to nearby Spillars Cove and check out The Chimney. A short trek on the Cable John Cove Klondike Trail leads you to this incredibly thin slice of sea stack jutting out from the coastline—the remains of an igneous intrusion. Someday, in the distant future, The Dungeon’s two arches will collapse to form sea arches much like this one.

The Spillars Cove geosite has special significance: it marks the boundary between the two geological halves of the peninsula, dividing the Ediacaran fossil-containing rocks of the St. John’s basin in the east from the Bonavista basin in the west.

More to Explore in the Discovery UNESCO Global Geopark

There are actually four other geosites to explore while you’re on the Bonavista Peninsula:

Did you know that there is also an official label for food that is produced inside a UNESCO Global Geopark? GEOfood refers to local products like Bonabooch Kombucha, which uses ingredients sourced from the boreal forest around Bonavista. These ingredients thrive in the area's naturally cool climate and acidic soils.

If you’re looking to hit up all of these geosites, pick up a map at one of Visitor Information Centres or download the Discovery! Geological Tour app to help guide you. Here's a map to help you to get oriented: 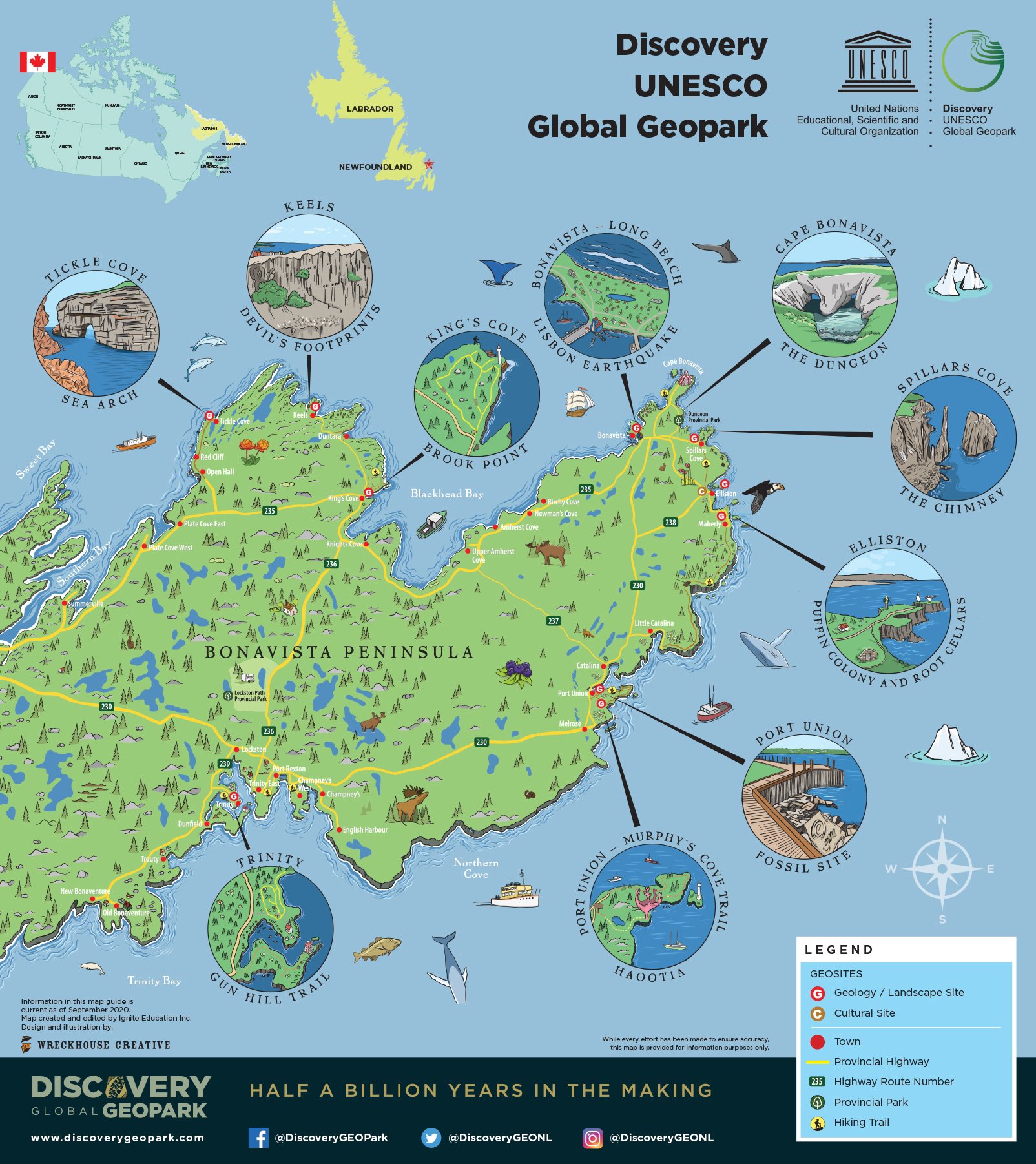 You can find a downloadable version of this map right here.