Ale Tales: The Story of Craft Breweries in Newfoundland and Labrador

Newfoundland and Labrador has seen a culinary renaissance in recent years, and that spirit of creativity and passion has spilled over into the local craft brewery scene. While craft brewing is no stranger to the province, there are a number of new breweries and brewpubs that capitalize on local ingredients and flavours. If you are going to explore our shores and want to satisfy that thirst for creativity and craft beer, then check out the stops along the Newfoundland and Labrador craft beer trail.

As one of the original microbreweries in the province, Quidi Vidi has been making a variety of beer in the quaint St. John’s village of Quidi Vidi since 1996. They are also the makers of the popular Iceberg Beer, made from 10,000 year old local iceberg ice. The brewery is located on the water and has a taproom with an amazing view. If you get hungry, there is a Quidi Vidi Fish and Chips truck waiting for you outside.

The Yellowbelly is not only a brewery, but also a pub and restaurant in downtown St. John’s. It’s gained a dedicated following among locals and explorers alike for the historic rustic stone building, a place with character and atmosphere that is a quintessential experience in St. John’s. Large windows of the brewing operation give you a glimpse of where your beer came from and all the hard work it took to make it taste great.

Located in Port Rexton on the Bonavista Peninsula, the Port Rexton Brewing Co. is a microbrewery in a small town that has become a hive of activity with craft beer enthusiasts. Famous for its patron’s regular long distance pilgrimages to their taproom, it is a converted school house which also doubles as an art gallery for local artists. A rotation of 14+ different flavors and styles await your palate throughout the year.

Western Newfoundland and Labrador is also represented in the city of Corner Brook by Bootleg Brew Co. This main street location turns heads and sits in a brick-front taproom and brewery that hosts pop-up bands and has become a popular spot for locals and explorers alike in the Corner Brook area.

In colourful and rugged Twillingate, the small-town Split Rock Brewing Co. offers a creative take on craft beer with several off-kilter English style flavors inspired by the surrounding landscape. If you are ready to stay a little longer to get a bite to eat, then the on-site Stage Head Pub will fulfil your appetite for an off-the-beaten path experience.

Brewing flavour-forward beers inspired by modern American craft beer, Landwash Brewery serves in their beer-hall style taproom where you can also grab some food from Saucy Mouth Food Truck. Order at the bar, share a table, and enjoy. Their taproom has a capacity of 48 people and serves all of their beer as well as rotating guest taps from their favourite Newfoundland Craft Breweries.

Located next to St. John's in a grouping of communities known as Conception Bay South or C.B.S, Ninepenny Brewing is another new brewery with taproom on the craft beer scene. Blending craft style and brewing science to create beer that is easy to drink and hard to forget, Ninepenny Brewing is also nearby hiking and walking trails offer an opportunity to take an evening stroll along a picturesque part of  the coast which is an old rail bed, then sample some brews in the Ninepenny taproom.

800 kms west of George Street sits Secret Cove Brewing and the Port Au Port Peninsula. Featuring a vibe and variety of flavour that Newfoundland and Labrador craft beer have become known for, Secret Cove is also a great place to hear live music from local artists. They are also becoming know for the burgeoning experience known as Beer Yoga! Namaste.

Long before they poured their first beer, Bannerman Brewing Co. was the location of the St. John's historic East Fire Station. Originally constructed after the Great Fire of 1892, it was rebuilt in the 1950s and still stands today at the corner of Duckworth and Ordnance Street. The aesthetic of the tap-room is a modern airy nod to the past. The tables and bar are made from reclaimed 24' Douglas Fir beams found during the demolition of several buildings at the nearby former Fort Pepperrell Canadian Forces base.

Sitting on the tip of the northern peninsula in St. Anthony, the five barrel brew house has five beers on tap and features chandeliers and tap handles crafted out of moose antlers by a local artist. The brewery is rooted in the Norse heritage of the area as well, with the L'Anse aux Meadows Viking settlement nearby. The taproom of this brewery channels a cozy cabin and a bit of Viking lore. RagnaRöck is housed in the centre of St. Anthony, in a renovated vintage co-op store built in the 1930s.

Located in Deer Lake on the west coast of Newfoundland, Rough Waters is a small craft brewery with four flagship ales: Sou’Wester Sour, Selkie Wheat, Scallywag India Pale Ale, and Signaler Porter. You can swing by Rough Waters’ taproom for a pint, or pick up some beers at their storefront. They’re also available at certain NLC (Newfoundland Liquor Corporation) locations across the province.

The latest addition to Corner Brook’s brewery selection, Boomstick Brewing Company offers a selection of quirky-themed (and tasty) beers, including a Bitter Bird English-style ale and a Wild Bologna India Pale Ale. You can tour the brewery and enjoy some tastings before committing to some pints in the taproom.

Nestled near the foothills of the Long Range Mountains, in the heart of the farming and logging community of Cormack, Crooked Feeder Brewing has established itself in the breadbasket of Western Newfoundland and Labrador. The brewery is rather unique in that it was constructed with as much locally sourced equipment as possible. The entire brew system was built using fermenting equipment and brew kettles fabricated from the old sawmill site that the brewery sits on. The offerings are all inspired by local people and place; Spillway IPA, Big Falls Pale Ale, Rideout Red, Western Brook Wheat, White River Wit, Bunker C, Run of the Mill, and Bonne Bay Blonde. In addition to their Cormack taproom, they also have a location in Corner Brook.

Tucked away on Pilley’s Island, Bumble Bee Bight Inn and Brewery offers the grand trio: beer, food, and a place to stay the night. Their craft beers inspired by the local area pair perfectly with their wood fired pizzas.  Enjoy a pint of beer before heading off to explore the area’s walking trails, historical sites, and beautiful ocean vistas. 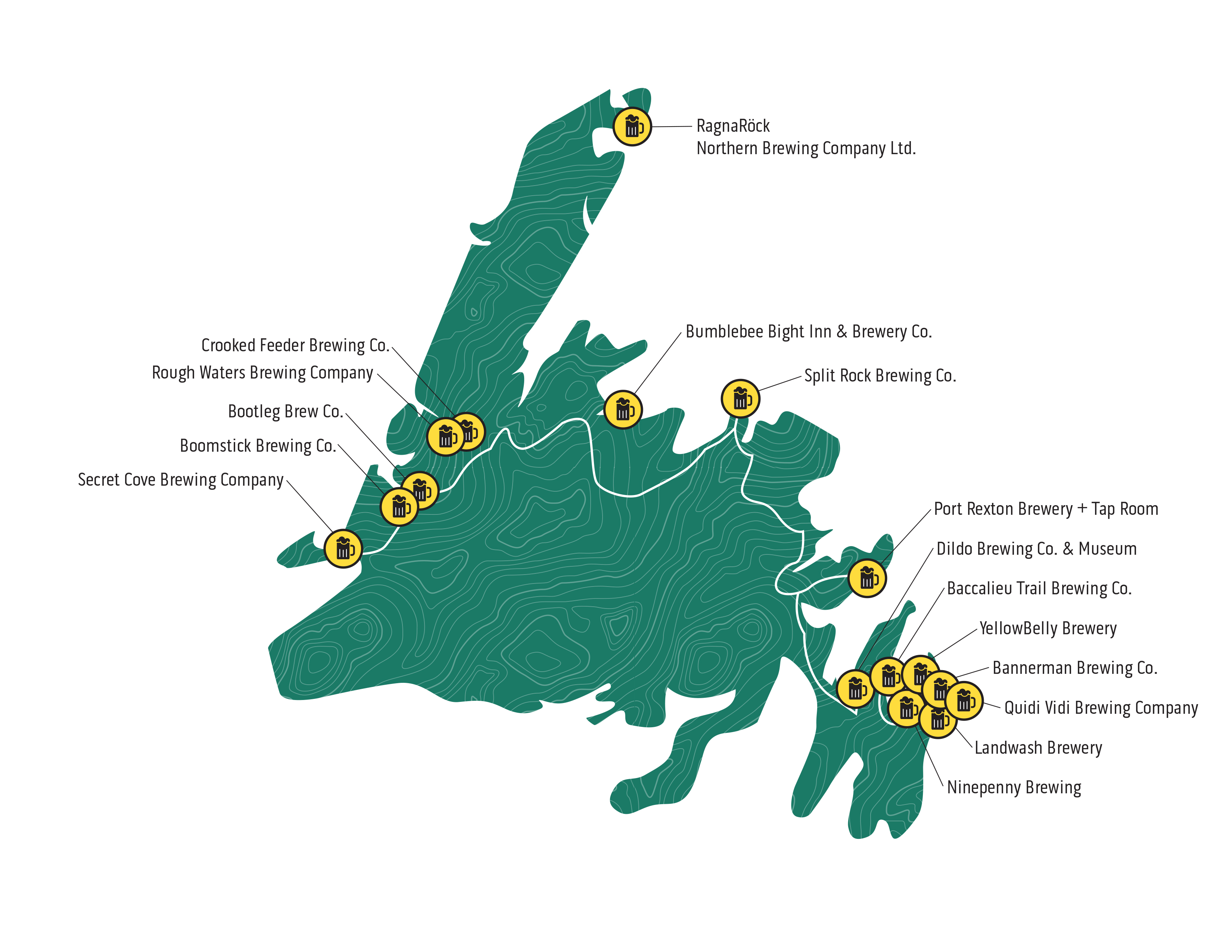 Labrador's first craft brewery and taproom. Named in recognition of the iron ore mines that are the primary industry of the area, Iron Rock Brewing lives in Labrador City as a hub of handcrafted beer in the Big Land. They offer a range of beer styles, along with tours and merchandise. 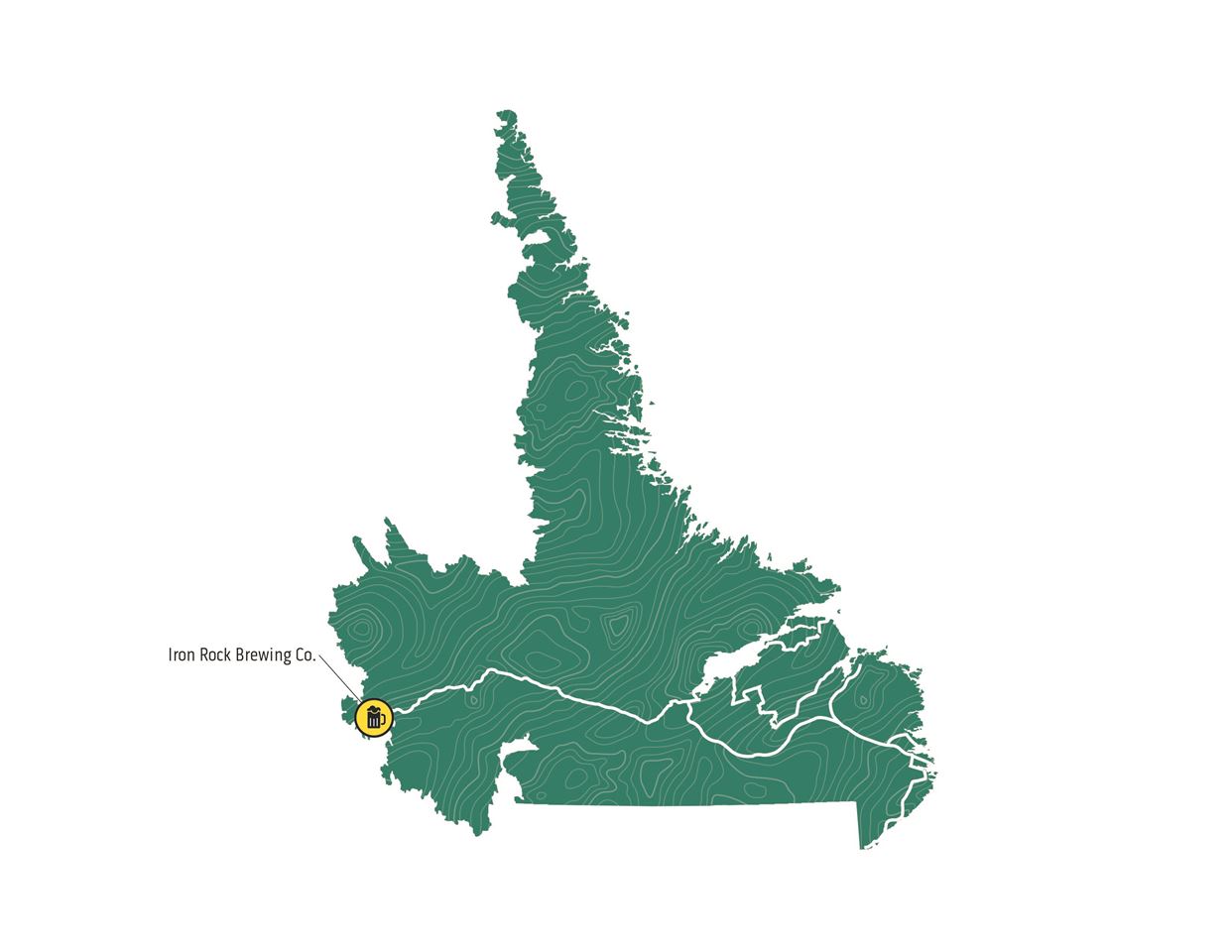 Other brews to sample on tap or from an NLC outlet

Originally known as Freshwater Brewing, Storm Brewing is an insider's craft brewery if there ever was one. The province's original craft beer is available through select Newfoundland and Labrador Liquor Corp (NLC) locations and a handful of pubs and corner stores in Downtown St. John's, but it's well worth finding. While they may not offer tours, they do have interesting offerings, including a coffee porter, Irish red, raspberry wheat, hemp ale, and a pale golden ale.  www.stormbrewing.ca

In the community of Pasadena on the west coast of the island portion of the province, there is a small-batch brewery with four delectable craft beers for your taste buds. Although they have no taproom, their beer is available at local restaurants and Newfoundland Liquor Corporation (NLC) outlets.

The new kid on the block to the craft beer community in the province. Located in Paradise, on the outskirts of St. John's, Banished Brewing keeps in simple with great beer canned within beautiful artwork. Find them at select Newfoundland and Labrador Liquor Corp (NLC) locations and convenience stores across the island. While they don't have a taproom, stay tuned for their much anticipated beer garden, coming soon.

Now that you've been given the coordinates to each brewery, you are ready to hit the Newfoundland and Labrador craft beer trail! The stops along this trail is full of some of our most iconic Newfoundland and Labrador places to see and things to do. While travelling, remember to drink responsibly and to consume with care. Have a favourite craft brew? Let us know in the comments!