Out here, there's a story around every corner.

No one is more surprised at Dave Paddon’s second career as a performer, author and storyteller than Dave Paddon himself.

Paddon, originally from North West River, Labrador, spent most of his professional career as an airline pilot based in central Canada. He spent “40 years reading manuals and learning procedures – the stuff that turns you into a robot.” As he neared retirement, Paddon and his wife moved back to their home province, settling in St. John’s.

“And within a year, I started to do this,” he laughs. This, meaning writing and performing recitations – rhyming, rhythmic, usually hilarious, stories told from memory – in front of a crowd. That was 10 years ago. Now Paddon is a regular at festivals and events around the province. Many of his recitations have been published in book form, and he’s a member of the St. John’s Storytelling Festival programming committee.

“I don’t know where the urge to tell those stories came from,” he says, “but if it was always there in me, it’s probably there in a lot of people. You just need the right circumstance.”

For Paddon, the right circumstance was checking out the monthly storytelling circle at Erin's Pub.

“The influence of St. John’s cannot be overestimated,” he says. “Everyone is at something here, writing books or composing songs or playing music or writing poetry.”

“I have this picture in my mind of overburdened muses flying around over town, and they’re loaded up with poems and songs and books and they can’t hold on to them all and they’re dropping them and every now and then one falls on somebody’s head. Maybe that’s what happened to me.” 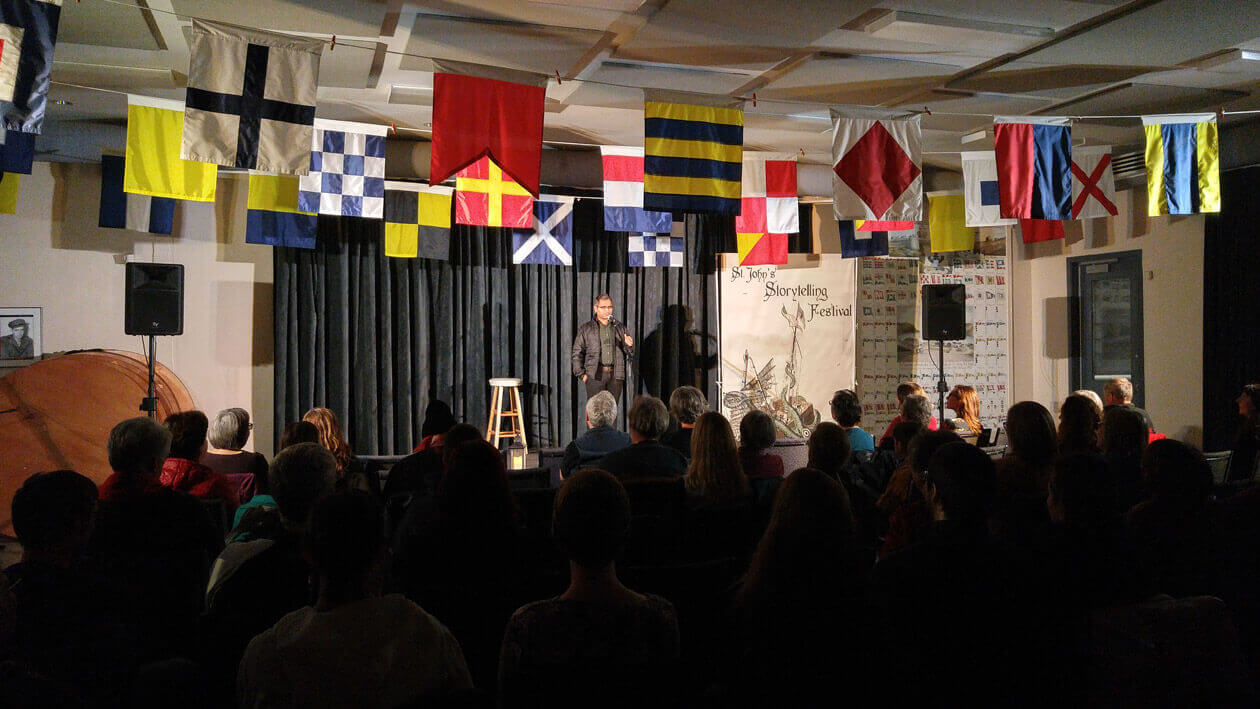 Muses are as good a reason as any for the storytelling that is so deeply woven into the cultural fibre of Newfoundland and Labrador. If they are the cause, they’ve been doing their work for a long time. A distinct, localized storytelling tradition – along with a body of folk tales, legends, ballads, and recitations – can be traced back to the first European settlers, according to folklorist, storyteller and author Dale Jarvis.

It’s not that being able to spin a yarn is unique to the province, he says. But having this oral tradition is a point of pride.

“What is special here is that it is accepted, respected – and expected,” says Jarvis. “One of the ways we build community is through stories. And Newfoundland and Labrador has been good at keeping a sense of place and a sense of community. The link between stories and place and stories and community is stronger here than other places.”

Jarvis describes storytelling as a spectrum: at one end is the performance: someone up on stage, in front of an audience, telling a story or doing a recitation.

At the other end is the type of conversational, water-cooler talk that would happen at the fishing stage or around the kitchen table. That’s where oral knowledge about community history or local legends are often told, but they can be a little trickier to find.

“Sometimes it’s hard to get at those personal, family or community stories,” he says. “Having said that, you can walk into any little shop anywhere around the bay and someone will tell you a story.”

Jarvis’s advice to visitors is to be curious: turn off the highway, visit an outport, and go have a chat. “You may need to befriend a local and get invited to the house party, or at least go in for a cup of tea. That’s when you’re going to hear the stories.” 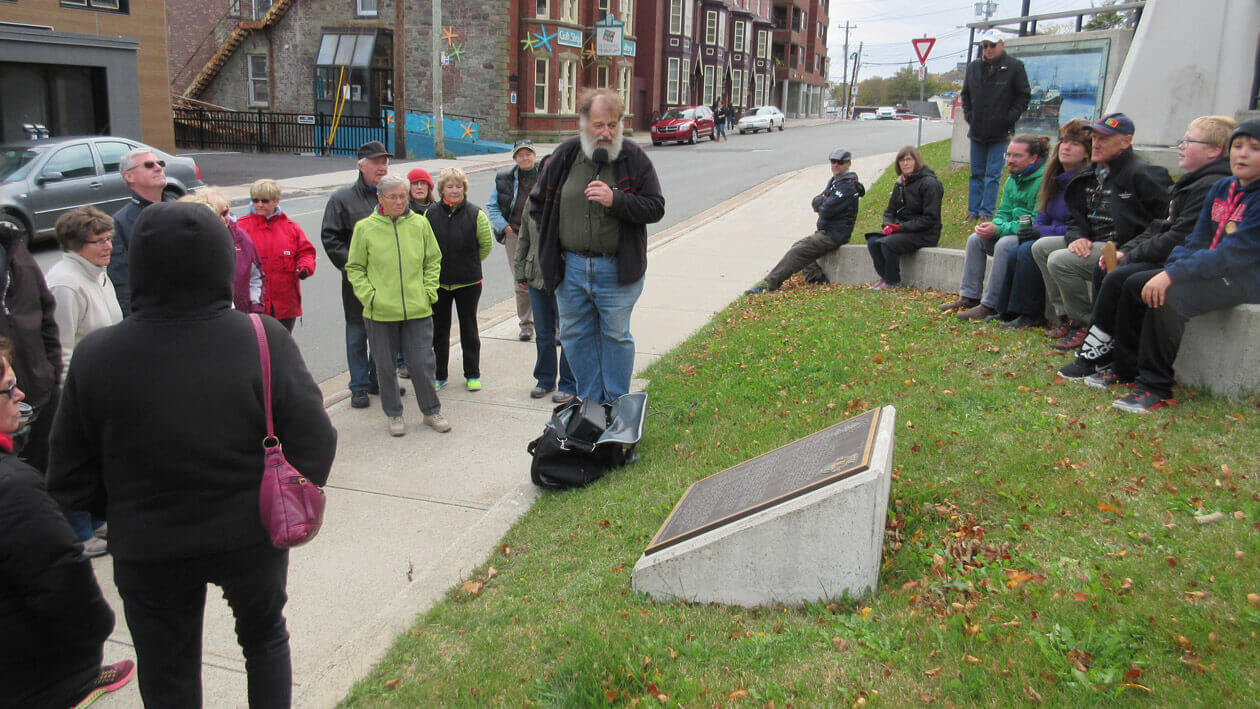 Performance also has a lot to offer in the province. The St. John’s Storytelling Festival, a week-long event held every October, brings together tellers and listeners from across the province and beyond. Performances are held all over the city – ghost stories in historic wine vaults, story circles in the heart of downtown, seafaring tales at the pub, a story walk in the Botanical Gardens – they are as varied as the tellers that tell them.

Festival president and multidisciplinary artist Catherine Wright, says the festival’s goal is to link the past to the present, and to encourage all voices.

“It’s really important to hear the old recitations and stories and ballads that tell us about a time in history – we make sure to always include tellers that have that kind of knowledge and pass on those kinds of stories,” says Wright. “We live in a changing world and it’s important we tell our stories of now, and who we are.”

In its 17 years, the Storytelling Festival has flourished, attracting a loyal audience and embracing a broader range of voices in a concerted effort to be more inclusive and diverse.

“Storytelling is very much about sharing, and about connection with people. It’s a great vehicle for making us feel connected and breaking down barriers … because when you’re listening to a story or telling a story you’re all in that moment together. There are no walls.

“At this point in our society there is a need for direct person-to-person connection. It’s important that we provide opportunities for people to come out and interact, and to tell stories in ways that reflect our society now.”

Jarvis, also one of the founders of the storytelling festival, agrees. “It’s not just about repeating the old stories but telling new stories that speak to contemporary experiences … that’s the sign of a healthy storytelling tradition.”

And that means providing a venue for first-time tellers, of all backgrounds, to give it a try.

“We all have stories to tell,” says Wright. “This is not about The Storyteller. We’re all storytellers. We all live things that we can share.”

And if you really don’t want to stand in front of the group and tell a story just yet? It’s okay to participate on the sidelines.

“Listening is as important as telling,” says Paddon. “It’s a two-way thing, activating the bonds we all have as people.” 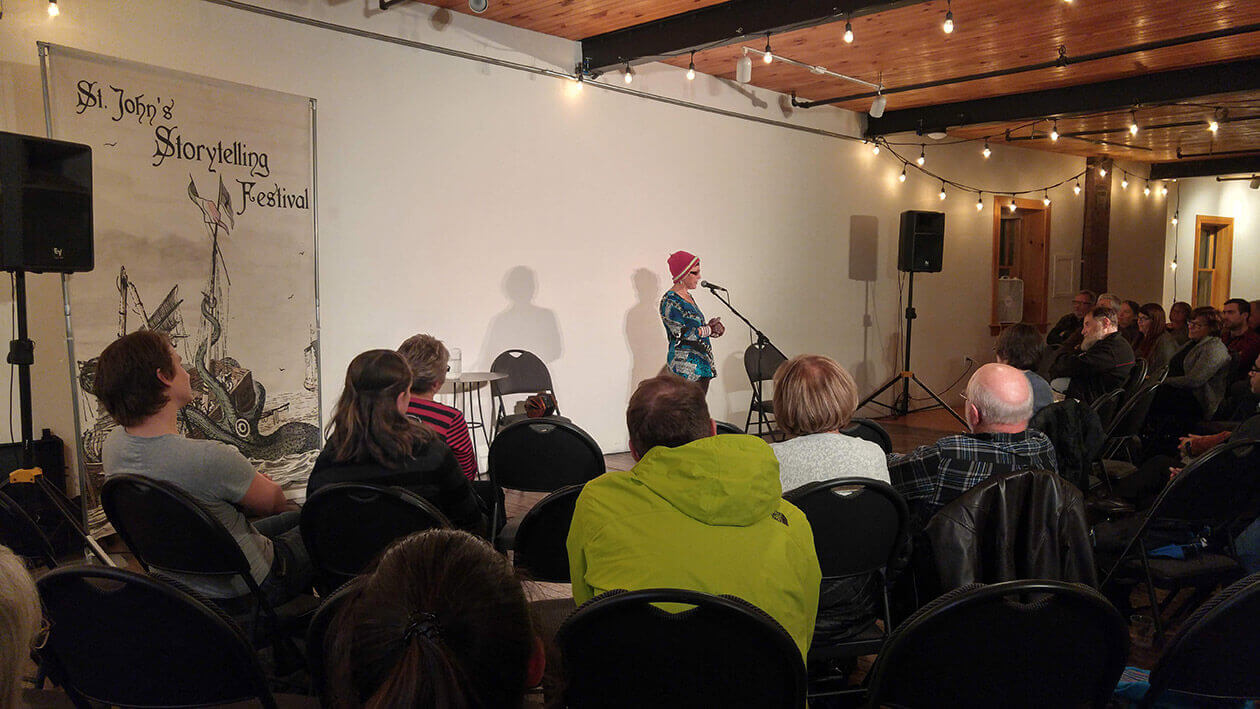