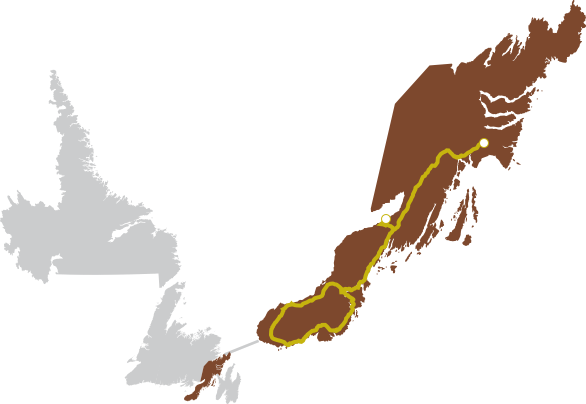 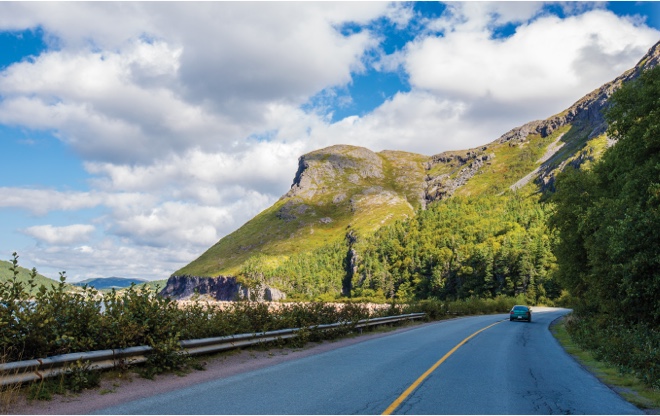 The road to Bay L’Argent, where a ferry – passengers and freight only – connect with communities of Rencontre East and Pool’s Cove on the Coast of Bays Road Trip.

Route 210 takes you down the Burin Peninsula. Everything is different here – from the dialects, traditional set and square dances, to the architecture.

Most communities are on the peninsula’s east side in Placentia Bay because of the good anchorage, abundance of fish, and pebble beaches for drying fish. This is why Europeans first began to settle here. Swift Current has long been a favourite area for sport fishing, and antique car enthusiasts will want to check out Vernon’s Antique Car Museum.

There are only a handful of communities on the west side in Fortune Bay. One of these is Bay L’Argent, where a coastal boat – passengers and freight only – connects with the community of Rencontre East and, further west, Pool’s Cove in the Coast of Bays. The return trip is a fine one-day excursion.

The highway crosses maritime barrens, one of the main eco-regions that characterize the province’s ecology. Keep an eye out for rough-legged hawks. The boulders dotting the landscape are erratics dropped by melting glaciers 10,000 years ago.

Marystown is the largest community, commercial hub, and services centre in the region. The main heavy industry is a shipyard and fabrication facility for the offshore oil industry.

Take a stroll along the Oldest Colony Trust boardwalk in Burin Harbour.

Nearby Burin on Route 221, which is built along a series of high cliffs and sheltered coves, was once a haven for pirates and privateers. Take a stroll along the Oldest Colony Trust boardwalk in Burin Harbour. Captain James Cook stationed troops atop what is now called Cook’s Lookout. The community museum has excellent displays on the 1929 tsunami that devastated the coast.

Winterland, on Route 222, has the best soil in the peninsula, and has been a farming area since the dark days of the Depression. It’s also a good place for birding.

In 1942, two U.S. warships ran aground near St. Lawrence, one of the region’s more famous communities. The people of St. Lawrence and Lawn risked their lives when rescuing 186 sailors. They helped bring the men ashore and took them into their homes. One of the rescued sailors was the late Lanier Phillips, an African-American who had experienced racism first-hand. The kindness shown to him by the people of St. Lawrence – most of whom had never before seen someone of African- American descent – helped him imagine a better world, and he went on to help desegregate the U.S. Navy. The Chamber Cove Heritage Walk traces the rugged coastline and leads to a memorial monument commemorating the event. 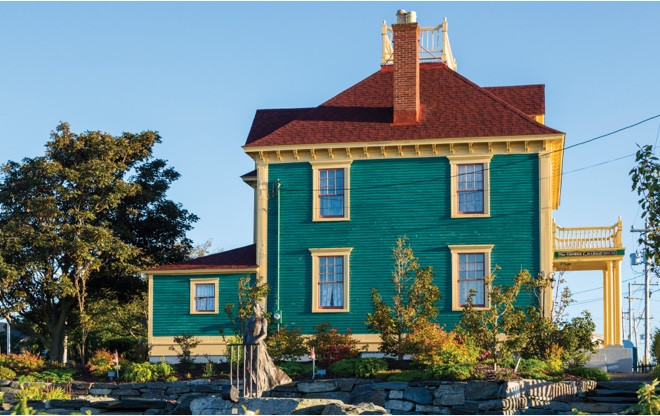 Visit Grand Bank, where the town’s architecture reflects the prosperity and loss that went hand-in-hand with that once-booming industry.

Grand Bank is the quintessential Newfoundland outport. More than any other port, this town is associated with the Grand Banks schooner fishery, and the town’s architecture reflects the prosperity and loss that went hand-in-hand with that once-booming industry. The excellent examples of Queen Anne-style homes are topped by widow’s walks, where the wives of well-to-do skippers waited, sometimes in vain, for their husbands’ return. Buildings in the town have features borrowed from the architectures of eastern Canada and New England, reflecting the reach of the fish trade. The Harris House is a perfect example of this period architecture, and the building’s widow walk provides a bird’s-eye view over the town. The Provincial Seamen’s Museum is located here as well.

Nearby Fortune derives its name from the Portuguese fortuna, which can mean both good and ill fortune.

The lighthouse at Fortune Head, one of several prominent lights along the coast, is surrounded by an ecological reserve that preserves fossils marking the boundary between the Precambrian and Cambrian geological eras about about 540 million years ago. Learn about this geological history at the Fortune Head Geological Centre. 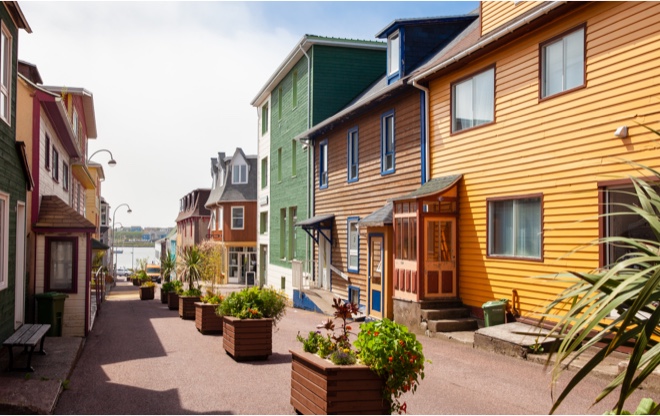 Take a side trip to France on the passenger and vehicle ferry servicing Saint-Pierre et Miquelon.

From Fortune, you can take a side trip to France. A passenger and vehicle ferry service sails to Saint-Pierre et Miquelon – you might have already glimpsed the French islands from Lamaline, nearly close enough to touch. St. Pierre et Miquelon are just an hour away and a good place to buy French wine and perfumes. But remember, you have to clear customs on your return and American visitors will have to clear customs before entering the U.S. as well. You can find schedules and fares at www.spm-ferries.fr.

The last stop is Frenchman’s Cove on Route 213 where there’s a nine-hole golf course in the provincial park. Hiking trails from here to nearby Garnish and Grand Beach cross beaches that are a great place to see the light over Fortune Bay.

*If you wish to visit Saint-Pierre et Miquelon, you have to present your Passport and clear Canadian Customs in Fortune upon your return. Please note: Insurance law varies from country to country, and as a result your policy may not cover you on European soil. Be sure to confirm coverage with your insurer prior to travel.