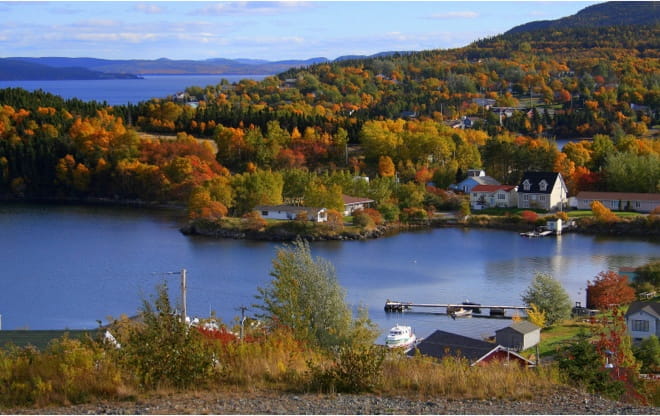 Visit the Clarenville Heritage Museum to learn about the town’s history, or go for a quiet walk following a meandering stream on the Rotary Trail.

The Discovery Trail has three road entrances: Routes 230 and 230A in Clarenville, and Route 233 in Port Blandford.

Clarenville, founded in the 1890s, is a mere babe compared to many other towns on the Bonavista Peninsula—but it’s the area’s busy service centre and commercial hub. Pay a visit to The Farm and Market where you can grab a coffee as you shop local. There are over 35 vendors here, a greenhouse, and even a root cellar. Visit the Clarenville Heritage Museum to learn about the town’s history, or go for a quiet walk following a meandering stream on the Rotary Trail. If you want more adventure, join a local boat tour to explore the coastline and its resettled communities. Kayaking excursions are also available. As you make your way to Trinity, make a stop in Milton for a visit to the Newfoundland Cider Company to taste their barrel-aged ciders. 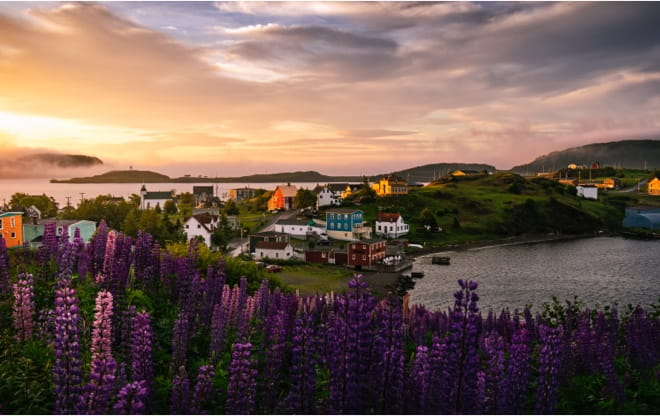 Trinity, once a prosperous and progressive fishing site, is one of the best-known communities in the province.

Trinity, once a prosperous and progressive fishing site, is one of the best-known communities in the province. Take Route 239 to this coastal gem. The permanent population is only about 350, with some 50 architecturally significant buildings. Take a guided walking tour, or just wander around. Among the fascinating exhibits are the Cooperage, where barrels were made, and a real working forge where you can see a blacksmith make iron items that are sold in local craft stores. Fort Point (also known as Admiral’s Point) was established in 1748 by the British to protect Trinity’s mercantile assets, and then later became the site of the lighthouse in 1871. You can visit the Light House Station and learn about the Fort’s history.

Coastal experiences are aplenty in Trinity, including small group boat tours and whale watching tours in Trinity Bay. Whales frolic and feed around our shores as they make their way along their annual migration route, while seabirds like puffins and gannets swoop and dive into the waters around your boat. You never know what unexpected visitor may pop up to say “hello” – even orcas have paid visits in recent years. 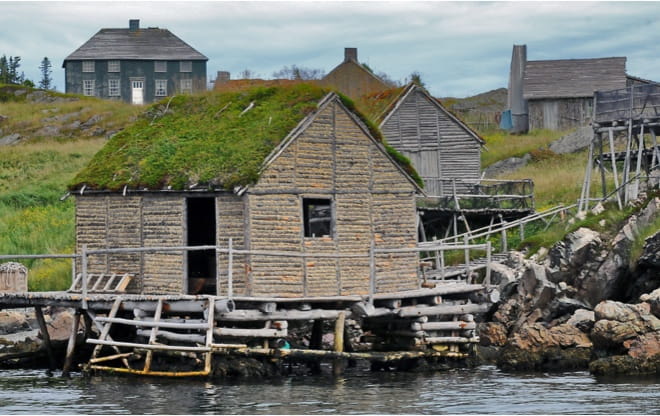 In New Bonaventure visit Random Passage – the film set for the TV miniseries. The site is a replica of an early 1800s fishing village.

But it is for the theatre that travellers come in summer. The high comedy, farce, and enduring drama of Newfoundland and Labrador’s history takes to the streets for the New Founde Lande Trinity Pageant, a walking tour of the town led by actors. Rising Tide Theatre also presents Seasons in the Bight at its waterfront theatre. In addition, you can go whale watching and hiking in the area. In New Bonaventure visit Random Passage – the film set for the TV miniseries. The site is a replica of an early 1800s fishing village.

In Port Rexton, you’ll find the Skerwink Trail, listed by Travel & Leisure magazine as one of the 25 best hikes in North America and Europe. The trail leads you to a sea stack called the Music Box because of the sounds the winds make. It’s also a great way to see kittiwakes, gannets, great black-backed gulls, and whales. Finish off your hike with a visit to the Port Rexton Brewery, one of the first craft breweries in the province. Visit the aquarium in Champney’s West, or head to nearby English Harbour where you’ll find the English Harbour Arts Centre housed in a beautifully restored church overlooking Trinity Bay. Their program includes arts and crafts workshops for all ages, creative retreats, and even musical performances.

Port Union, as the name suggests, is a union-built town, the only one of its kind in North America. It was founded by Sir William F. Coaker, an early 20th-century reformer, union organizer, politician, businessman, teetotaler, and failed farmer who devoted his life to bettering the lives of downtrodden fishermen. 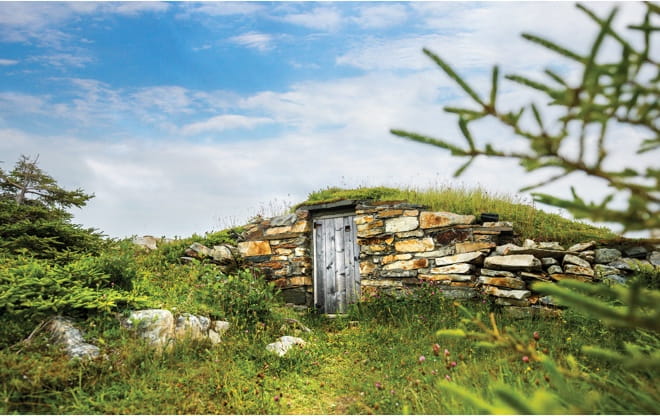 See hundreds of man-made, frost-free, food preservers in Elliston, the root cellar capital of the world.

Another interesting side trip is at Elliston, the root cellar capital of the world. Hundreds of these man-made, frost-free, food preservers – many still in use – recall the ingenuity of the pioneers. Elliston’s puffin-viewing site offers the closest view of these comical birds from land anywhere – they often land on the cliffs mere feet away. While here, visit the Home From the Sea John C. Crosbie Sealers Interpretation Centre. This modern museum and art gallery brings to life the seafaring stories of sealers and their dangerous work, while the memorial monument honours the lives lost in the 1914 sealing disaster.

Before roads were built, there were two ways to get around: by boat or shank’s mare – on foot –and as a result, there are coastal trails galore in this part of the world. Guided or self-guided, hiking or walking on the Hike Discovery trail network takes you to sea stacks, long-abandoned outports, and weird rock formations. 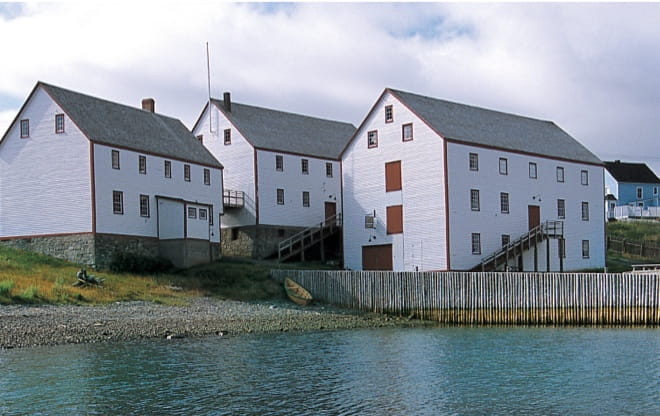 Visit the Ryan Premises National Historic Site and discover the story of five centuries of the fishery in Newfoundland and Labrador.

The northern tip of the Bonavista Peninsula is where Italian explorer Giovanni Caboto (or John Cabot as he is locally known) first set eyes on North America in 1497. There in Bonavista you will find the Ryan Premises National Historic Site. This restored fish merchant multi-building premises tells the story of five centuries of the fishery in Newfoundland and Labrador.

Outside town is the Cape Bonavista Lighthouse Provincial Historic Site and the Dungeon Provincial Park, where a collapsed sea cave has become a steep-sided crater. To see Bonavista’s coastline from a different perspective, hop on a boat tour and keep your eyes peeled for whales and giant icebergs. Back on land, join a chef for a boil-up on the beach, where you’ll enjoy tea and a snack over an open fire – or perhaps you’ll sample salt fish, lobster, cod cheeks, and even moose.

The best thing to do in Bonavista is park your car and walk. It’s a great way to see the old part of town and take in the architecture. Check to see what’s playing at the Garrick Theatre.

Explore the Discovery UNESCO Global Geopark, to view some of the best-preserved fossils in the world.

Out here on the upper portion of the Bonavista Peninsula is the province’s newest UNESCO site, the Discovery UNESCO Global Geopark. This collection of 10 geologically significant sites are scattered around the coast and include some of the best-preserved fossils in the world. Explore the rock surface of the Port Union National Historic District Boardwalk for fossils from the Ediacaran Period, admire the curious existence of the Devil’s Footprints in Keels, and more.

On the peninsula’s north side, turn off Route 235 onto Route 235-19 to Open Hall, Red Cliff, and Tickle Cove, famed for the song “Tickle Cove Pond.” Scenes from the feature film The Grand Seduction were filmed in this area. At Three Mile Ridge farm, visit the farm animals, tour the honeybee field, or hike to a cookhouse where you’ll enjoy a meal at sunset. There are galleries and art studios on the north side as well. While here, tee off at The View Golf Course, where the natural environment plus sand and water traps make for a fun, strategic game for all skill levels.

Between the Bonavista and Burin Peninsulas, there’s a little-known area with lovely scenery. That’s Southwest Arm in Trinity Bay. Route 205 along the north coast of this bay and Route 204 on the south side leads to natural attractions like coves and roadside bogs alive with wildflowers.