Kittiwake Coast: Road to the Shore

Kittiwake Coast: Road to the Shore 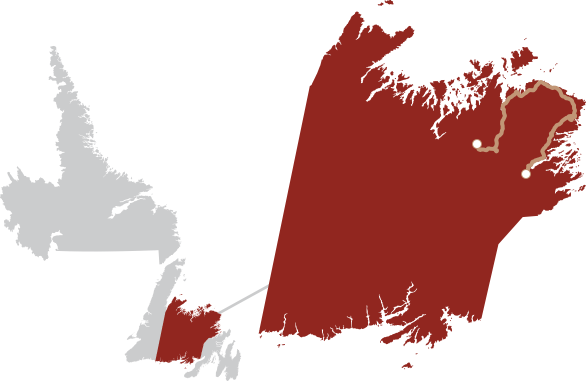 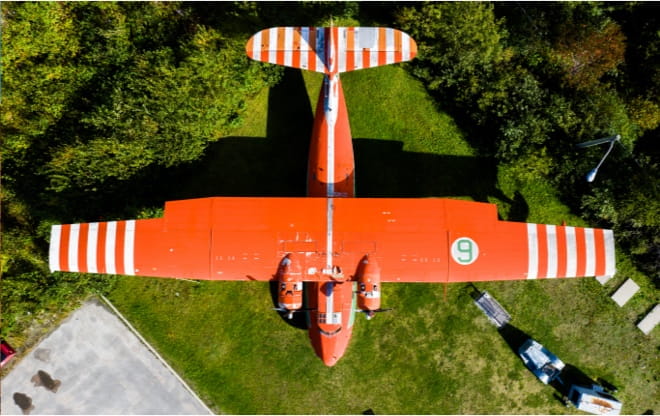 This portion of the Kittiwake Coast is a horseshoe-shaped loop from Gander along Route 330 and Route 320 to Gambo, affectionately known as “The Shore” by locals.

Gander is an airport town. As one of the few airports capable of handling the traffic when US air space closed on September 11, 2001, Gander was perfectly positioned to welcome almost 7,000 newly stranded passengers and their 38 international planes.

Gander isn’t a large town – the visitors almost outnumbered the locals. Even so, its citizens and Newfoundlanders and Labradorians up and down the Kittiwake Coast opened their homes and hearts to these strangers from all over the world. These travellers found warm beds and home-cooked meals during a truly terrifying time. And now the kindness and hospitality shown to visitors has become the basis for the Tony-award winning Broadway musical Come From Away. When you’re in Gander, you can take the Beyond Words Tour to learn more about the events and the people who inspired the play. 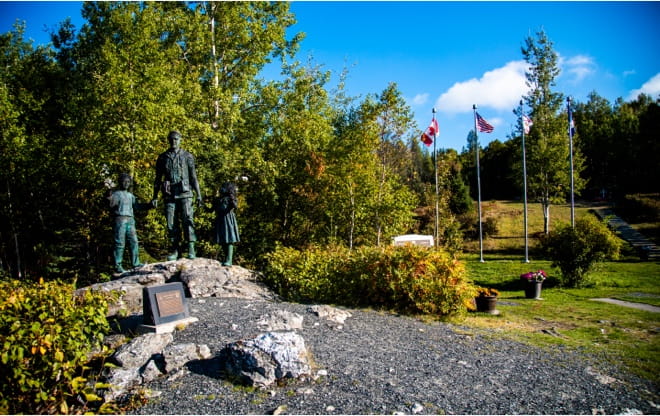 At the Gander Heritage Memorial Park, visitors can view various monuments reflecting the aviation and military history of Gander.

Gander has long been known as the Crossroads of the World because of its role in transatlantic aviation after World War II. During the war it was a transhipment point for aircraft being flown to Britain. Today it’s a modern service town, but its air history is vividly remembered in the town’s aviation museum, which includes real aircrafts like the Hudson Bomber – one of the few remaining in the world.

North of Gander, Route 330 takes you to Gander Bay, a scenic area known for its great salmon fishing. Then it’s onward to Carmanville, where the Carmanville Wetlands Interpretation Centre and Nature Trail offers four kilometres of walking trails paired with birdwatching opportunities for songbirds and waterfowl. When winter hits, people take to the trails on skis or snowshoes.

Enjoy a relaxing day near the water at Musgrave Harbour Beach.

There are three popular sandy beaches on this road trip: Musgrave Harbour Beach, Lumsden Beach, and Cape Freels Beach. First up is Musgrave Harbour, where you can enjoy a relaxing day near the water followed by a visit to The Fishermen’s Museum. The building was built in 1910 by Sir William Coaker and the museum displays several artifacts from the fishery over the year. There’s a beautifully painted mural on the outside of the building as well.

The coastal drive between Musgrave Harbour and Lumsden is a treat. The surf here is impressive, with enormous waves whipping up white foam. In the spring, look out for icebergs and whales in the distance. Deadman’s Bay Provincial Park is just a few minutes from Lumsden, and the fine beige sand of the beach here makes for a seriously underrated stop.

Lumsden Beach is the most popular beach on the Kittiwake Coast, but it’s rarely crowded – there’s enough space for everyone, and then some. Although local folklore suggests that pirates once roamed these shores, nowadays people flock to this enormous expanse of beach to swim, lounge, or scour for treasure. The Wonder Shore – Lumsden Shoreline Hiking Trail will take you along the coast, over sand dunes and rocky cliffs, and to historic landmarks like resettled communities and graveyards. 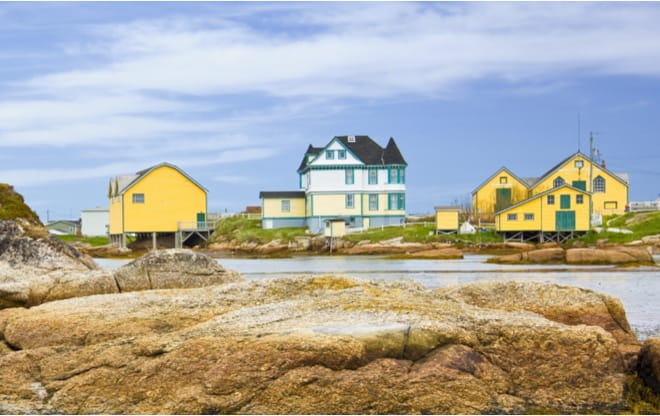 Then it’s off to Cape Freels, not only to visit the pristine beach there, but to keep an eye out for birds. The Cape Freels coastline is a designated Important Bird Area by BirdLife International because it provides an important nesting habitat for several species of seabirds. So while you’re here, keep an eye out for the Common Eider, Common Murre, Razorbill, Arctic Tern, and more. One of the best places to birdwatch is on the Wonder Shore – Cape Freels Hiking Trail. Newtown – called the Venice of Newfoundland because it’s built on a series of tiny islands – has one of the most notorious architectural gems along this part of the shore. The Alphaeus Barbour House is a Queen Anne-style mansion built in 1904 by a local merchant. Inside are many original furnishings and fittings, and the overall character and look of the house makes you feel like you’re in another time. The town’s heritage village complements the Barbour House.

The New-Wes-Valley area has a unique history. A small peninsula juts out into the Atlantic, bringing the resources of the sea just a bit closer than elsewhere along the coast. On top of that, the waters here are a bit warmer, which means the area has milder winters. This is what first attracted Indigenous people to the area thousands of years ago. Tours provide a variety of excursions, from hiking and kayaking to beach boil ups and berry picking. For a gentle trek, try the Business Pond Walking Trail, part of the Wonder Shore trail system. Before you leave, pop into Norton’s Cove Studio to peruse the artwork, or to see what art workshops are on. 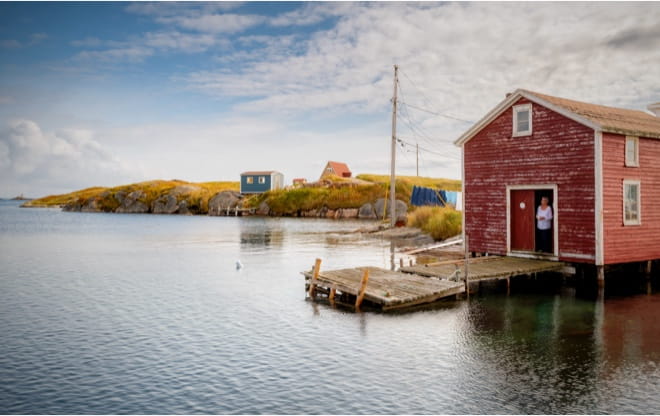 Explore Greenspond, one of the oldest continuously inhabited outports in the province.

Nearby Greenspond is a photogenic community with a rich history. It’s one of the oldest continuously inhabited outports in the province, with a European presence dating back to the 1690s. From here you can wander around town to see historic buildings, hike the Wonder Shore – Greenspond Hiking Trail, or take a boat tour to look for birds, icebergs, and whales. Your guides may also lead you to resettled islands and secluded beaches, where you’ll enjoy a hearty meal cooked over an open fire. In Dover, head to the lookout over the Dover Fault. The fault is a major break in the Earth’s crust, marking the area where the North American and European continents collided 150-million years ago. The lookout has handy interpretation panels detailing Dover’s fascinating geological history.

The coast around Dover and Hare Bay is excellent for whale watching and iceberg viewing, as well as boat tours that will take you out exploring the nooks and crannies of the Kittiwake Coast. Fishing and bird watching are also on offer. 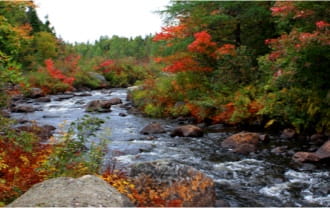 Hike the many beautiful walking trails around Gambo.

At the end of this scenic drive is Gambo, birthplace of Joey Smallwood. He successfully led the province into Confederation, and became the first Premier of the province when Newfoundland joined Canada in 1949. There are several commemorative pieces that recall his life and work, including a statue and a museum. For hikes and walking trails, try the Dominion Point Trail, the Gambo River Trail, or the Middle Brook Trail. The Logger’s Memorial Park highlights the community’s storied logging history, while the David Smallwood Park has access to trails and a natural swimming hole.

If you’re interested in the Smallwood legacy, look for the large Joey Smallwood statue in town, and visit the Smallwood Interpretation Centre and the Kittiwake Coast Information Centre. This is also the location of the “Just Imagine” dinner theatre based on events from September 11, 2001. If you’re here at the end of July, see what’s on the schedule for the Smallwood Days community festival. As you leave town, make a stop at Joey’s Lookout for the magnificent views over Gambo and the Gambo River. There’s a giant sculpture of Joey Smallwood’s head here, too.