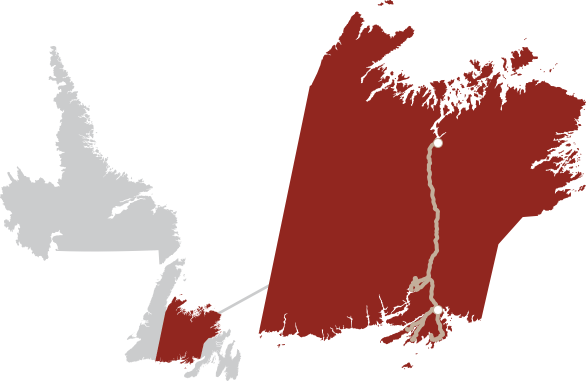 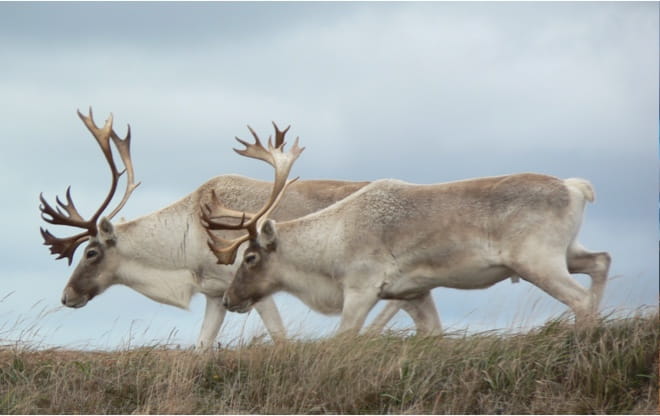 As you drive down Route 360, keep an eye out for the caribou herd that make their home on the barrens.

The names Hermitage Bay, Connaigre Bay, Great Bay de L’Eau, Corbin Bay, Belle Bay, Fortune Bay, and Bay d’Espoir explain the name given to the southern portion of the central region. Take Route 360 south (also known as the Bay d’Espoir Highway) from Bishop’s Falls to its junction with Route 361 (about 130 kilometres). As you drive down Route 360, keep an eye out for the caribou herd that make their home on the barrens. As you near the southern section, the forests and barrens give way to a fjordland of secluded bays and deep inlets. There are no fuel stops on Route 360 until you reach Bay d’Espoir or the other communities on the coast. It is strongly advised to fuel up in advance.

Once you reach the junction at Route 361, you have a few choices. Further along Route 361 (about 12 kilometres) will bring you to several scenic communities in Bay d’Espoir, including Milltown and St. Alban’s. Here, join a local boat tour to explore the great mysteries of the bay, including a resettlement tour of Great Jervis or a traditional beach boil-up. 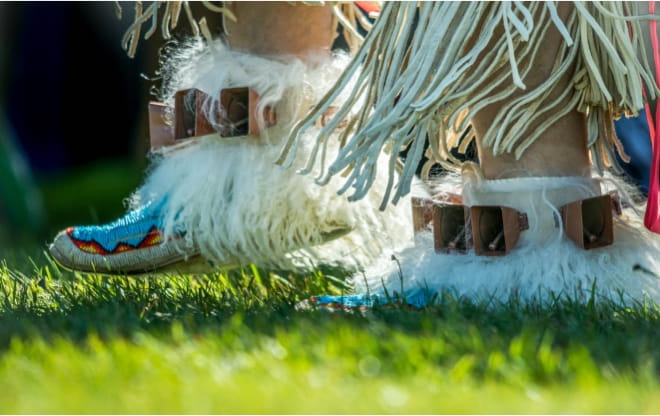 Head back towards Conne River on Route 365, home to the Miawpukek First Nation Reserve. There’s a powwow held here every July that introduces visitors to Newfoundland Mi’kmaq traditions, including plenty of dancing, spiritual walks, and special ceremonies. At the Miawpukek Culture and Family Recreation Park, you may encounter locals building a traditional birch bark canoe – and don’t forget to climb the wooden staircase to Clem’s Lookout for a view over the bay. Outfitters with Indigenous guides will also lead you deeper into the interior of the Coast of Bays on snowmobiling or ATV tours.

Further south back on Route 360 is Harbour Breton, one of the oldest and largest communities on the south coast. First settled by French fishermen, and later by the English, its commerce was dominated for decades by the Newman family, famous for their port wine, which is still available today. You’ll learn more about the Newman story at the Elliot Premises, which also has a small gift shop and café area. Tour the Sunny Cottage Heritage Centre, a large well-preserved Queen Anne Style home built in 1907 by a local merchant. Visit the beach at Deadman’s Cove, and walk the leisurely Mile Pond Boardwalk. Top it all off with a hike up Gun Hill for a spectacular view over the fjords and the ocean. On a clear day, you’ll see straight to St. Pierre et Miquelon. 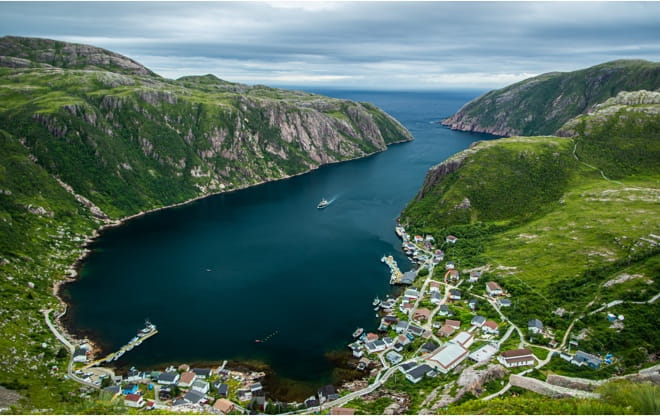 Catch the ferry to Francois, Gaultois, and other communities. (See the South Coast Adventure Road Trip)

Route 364 takes you to Hermitage, where you can catch the ferry to Gaultois. See the South Coast Adventure Road Trip (this small ferry takes passengers only and no vehicles). But you can also go deeper into the Coast of Bays by taking the winding roads of Routes 362 and 363, where you’ll find tall fjords and ocean vistas that make for an enjoyable, leisurely road trip. Belleoram is home to the annual Iron Skull Folk Festival, a musical celebration whose name honours the towering Iron Skull Mountain dominating the town. The Iron Skull Mountain Hiking Trail is a challenging trek to its summit, but worth the views over endless expanses of mountains and ocean. For a dose of history, visit the John Cluett Heritage House dating back to 1844 with many historical artifacts from that period.

Take your time exploring other small communities like St. Jacques, Boxey, Coomb’s Cove, and Wreck Cove with plenty of pauses to take in the views or to beachcomb one of the area’s many beaches. Pool’s Cove marks the entrance to the Bay du Nord River, a designated Canadian Heritage River, which flows through the rugged landscape of the Bay du Nord Wilderness Reserve. Backcountry wilderness recreation includes canoeing, kayaking, angling, wildlife viewing, birdwatching, and more. From Pool’s Cove you can take the coastal boat to Rencontre East and then onward to Bay L’Argent on a Fortune Bay Adventure.

There are no fuel stops on Route 360 until you reach Bay d’Espoir or the other communities on the coast. It is strongly advised to fuel up in advance.