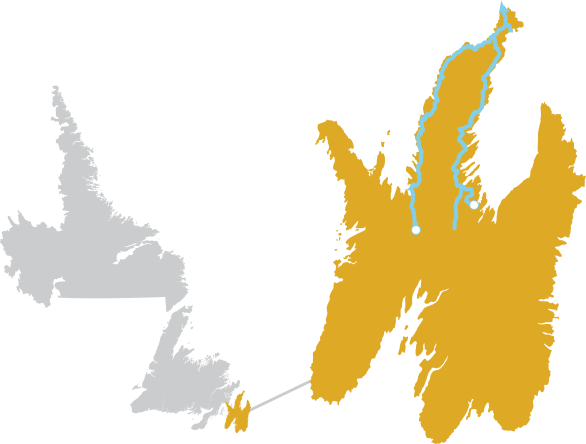 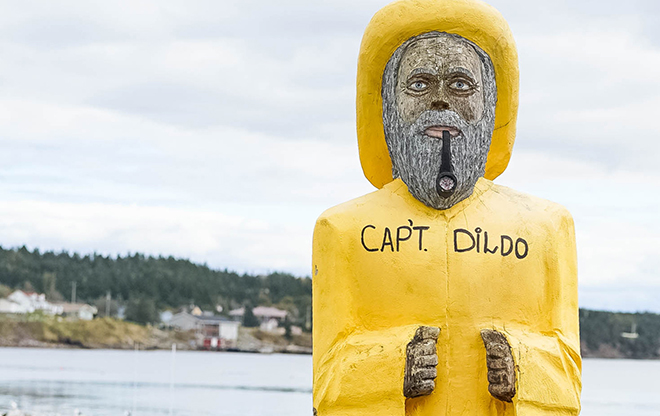 The Baccalieu Coastal Drive traces the long finger of the Avalon Peninsula between Trinity Bay and Conception Bay. Western access is from Route 80 near Whitbourne on Route 1.

Don’t forget to stop in Cavendish for a photo op of the rainbow of fishing sheds right on the beach.

While here, hop onboard one of Dildo’s boat tour operators and look for whales and icebergs. You might even try your hand at cod jigging or scallop fishing. The entire coastline on this drive is dotted with historic fishing villages and dramatic rock formations, like the jagged peaks of Shag Rock jutting out of the ocean in Whiteway –and don’t forget to stop in Cavendish for a photo op of the rainbow of fishing sheds right on the beach.

The Cable Station in Heart’s Content, once a major relay point for transatlantic telegraph messages, is now a Provincial Historic Site, complete with much of the original equipment. The first successful transatlantic cable landed here in 1866. You may feel inspired to stretch your legs on the Mizzen Trail, an easy two-kilometre trail around Mizzen Pond. Stop in Winterton, where the Boat Building Museum will give you a chance to roll up your sleeves and learn how to build a traditional dory or punt.

Nearby New Perlican has a collection of 20 colourful fishing stages on the water. At the SeaGlass Studio you can participate in a stained glass workshop to create a fishing stage keepsake of your own. Then it’s on to Winterton, where the Wooden Boat Museum of Newfoundland and Labrador will give you a chance to roll up your sleeves and learn how to build a traditional dory or punt, and learn about these vital components of our marine history.

At Old Perlican, Route 80 merges into Route 70. The most north-westerly point of the peninsula is where you’ll find Grates Cove, which has a rather unusual National Historic Site – hundreds of rock walls built by farmers to keep roaming animals off their fields, dating back to 1790. Learn all about it on a guided walk.

The Grates Cove Studio & Café is a hidden gem on this peninsula. The two-room converted schoolhouse is both a place to try some unique Cajun/Newfoundland and Labrador fusion foods and peruse the studio’s collection of woodworking, pottery, and printmaking art. On the Baccalieu View Walking Trail in Red Head Cove, the forest path gives way to views over Baccalieu Island. This imposing rocky island is home to an impressive number of seabirds, including 3-million pairs of Leech’s storm petrels—the largest nesting ground anywhere in the world for this species. Enjoy the cacophony of seabirds paired with an ever-changing landscape of ponds, meadows, and wildflowers. There’s also an interpretative display about the reserve in nearby Bay de Verde.

While in Bay de Verde, visit the Heritage Premises to learn about how fisher people once lived and worked in the area. The premises includes over 700 artifacts, a fish store and flake, a loft, and even a root cellar. Every summer, the Festival on the Wharf invites locals and spectators for music, food, and fun. Bay de Verde also hosts the renowned Festival of Quilts, celebrating the creativity and handiwork of local quilters. Peruse the quilt exhibitions—and stick around to see the competition for best “Small Wall Quilt.” In Blackhead, pick up an Ugly Stick and join a traditional shed party with food tastings, local entertainment, and a storytelling session (or two). Nearby, the heart-shaped beach of Salmon Cove offers a stretch of fine sand framed by tall cliffs and a 2-kilometre hiking trail.

The quaint town of Carbonear is lined with historic buildings, like the Rorke Stores Museum and the Old Carbonear Post Office (now home to the Carbonear Heritage Society) with a central clock tower designed in the Second Empire style. A walking tour will help you get your bearings. Otherwise, take a stroll around this scenic town – you might even hear a live music session flowing from the Stone Jug.

This is pirate country, but it’s a romantic piracy. An Irish princess captured by pirate Peter Easton settled near here with one of Easton’s crew, Gilbert Pike, and lived happily ever after. Easton went on to infamy and fortune, while Princess Sheila NaGeira has inspired books, songs, and a stage production. The site of Easton’s old pirate fort is now a museum in Harbour Grace. You can also hike Pirate’s Path Trail for some of the best views over Harbour Grace Island and Carbonear Island – and keep your eyes trained on the horizon for the ghost of pirate ships past. It was from Harbour Grace that Amelia Earhart set out on her solo flight across the Atlantic in 1932.

Harbour Grace also played a role in pioneering aviation: it was from here that Amelia Earhart set out on her solo flight across the Atlantic in 1932. Though devastated by fire several times, the town still retains a wonderful inventory of historic buildings.

In Bay Roberts, drop by The Cable Building, a National Historic Site which houses the Road to Yesterday Museum and the Christopher Pratt Art Gallery. Then take a leisurely stroll along the shoreline through the original settlement’s meadows to Mad Rock on the Shoreline Heritage Walking Trail and watch the sea crash against the craggy coast. Fuel up at Baccalieu Trail Brewing – or head to The Newfoundland Distillery Company in nearby Clarke’s Beach if spirits are your preference.

The first official English colony in Canada was founded at Cupids by John Guy in 1610, and the site is now being excavated. See the artifacts and exhibits at the Legacy Centre. Take an easy stroll around Brigus to admire many charming old buildings.

Brigus was the birthplace of Captain Bob Bartlett, the ice pilot who guided Robert Peary to within striking distance of the North Pole in 1909. His home, Hawthorne Cottage, is now a National Historic Site, and the town retains much of its 19th-century character. Take an easy stroll around town to admire these charming old buildings, and make note of the unique stone walls lining the rivers. When you come to the Brigus Tunnel, walk through it. You’ll know what we mean.