How outlandish costumes bring Newfoundlanders together each holiday season

A look into the origins of mummering, one of Canada’s most eccentric holiday traditions

If you see your neighbours in the streets, knocking on doors wearing underwear outside of their clothing – worry not. It’s just another December day in Newfoundland and Labrador.

In fact, the practice has a name: It’s called mummering, and it’s a centuries-old holiday tradition. Every year, Newfoundlanders of all ages dress in outlandish disguises to conceal their identities and go parading down the streets, singing, dancing and dropping in on neighbours – all in the name of fun and foolishness.

English and Irish traditions first brought mummering – also referred to as mumming, guising or janneying – to the island 300 years ago, says Terra Barrett, folklorist and director of the annual St. John’s Mummer’s Festival. In the mid-1800s, the practice was considered controversial – and even temporarily banned – when it became linked to drunken antics and foolish practices. 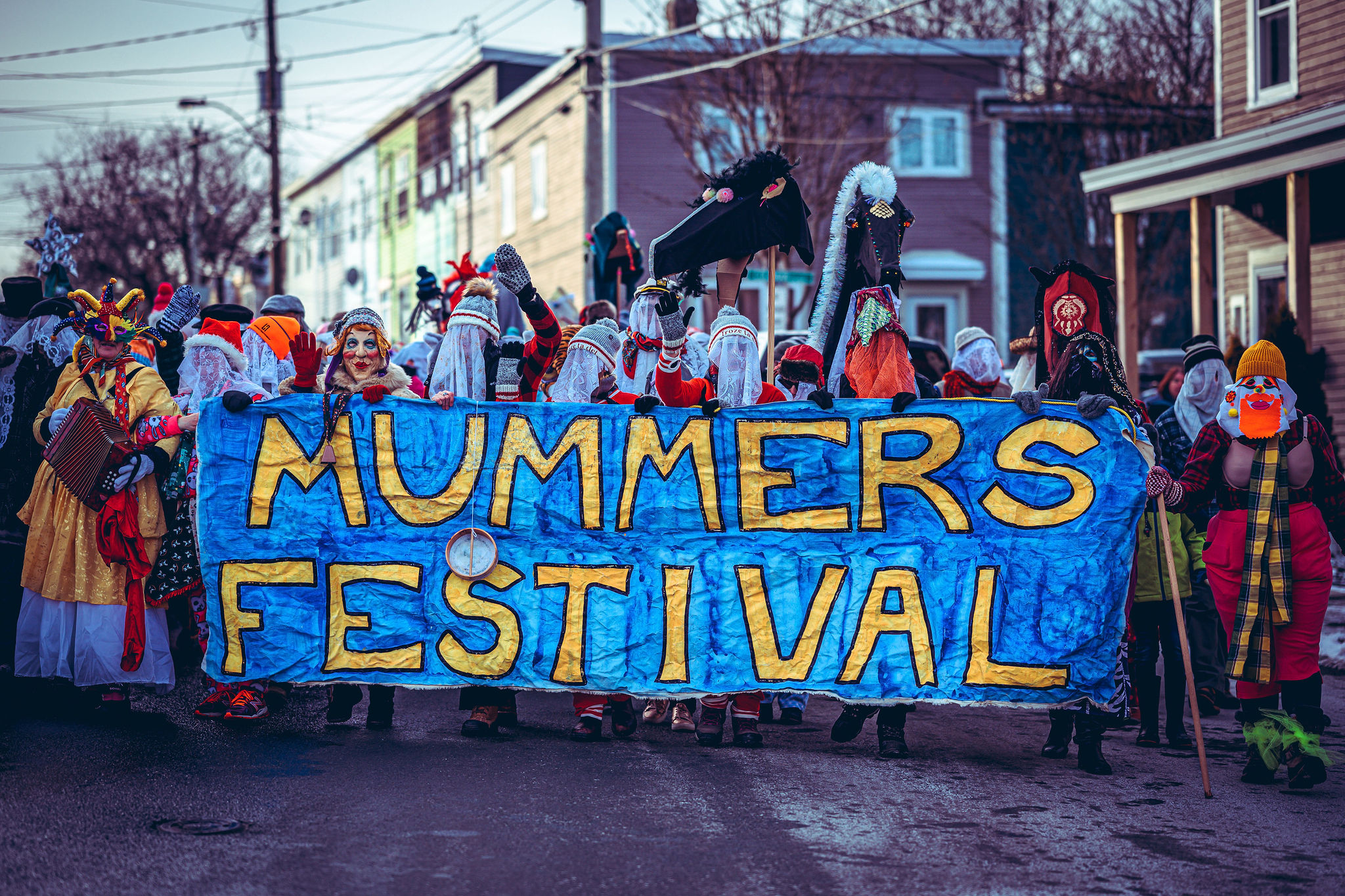 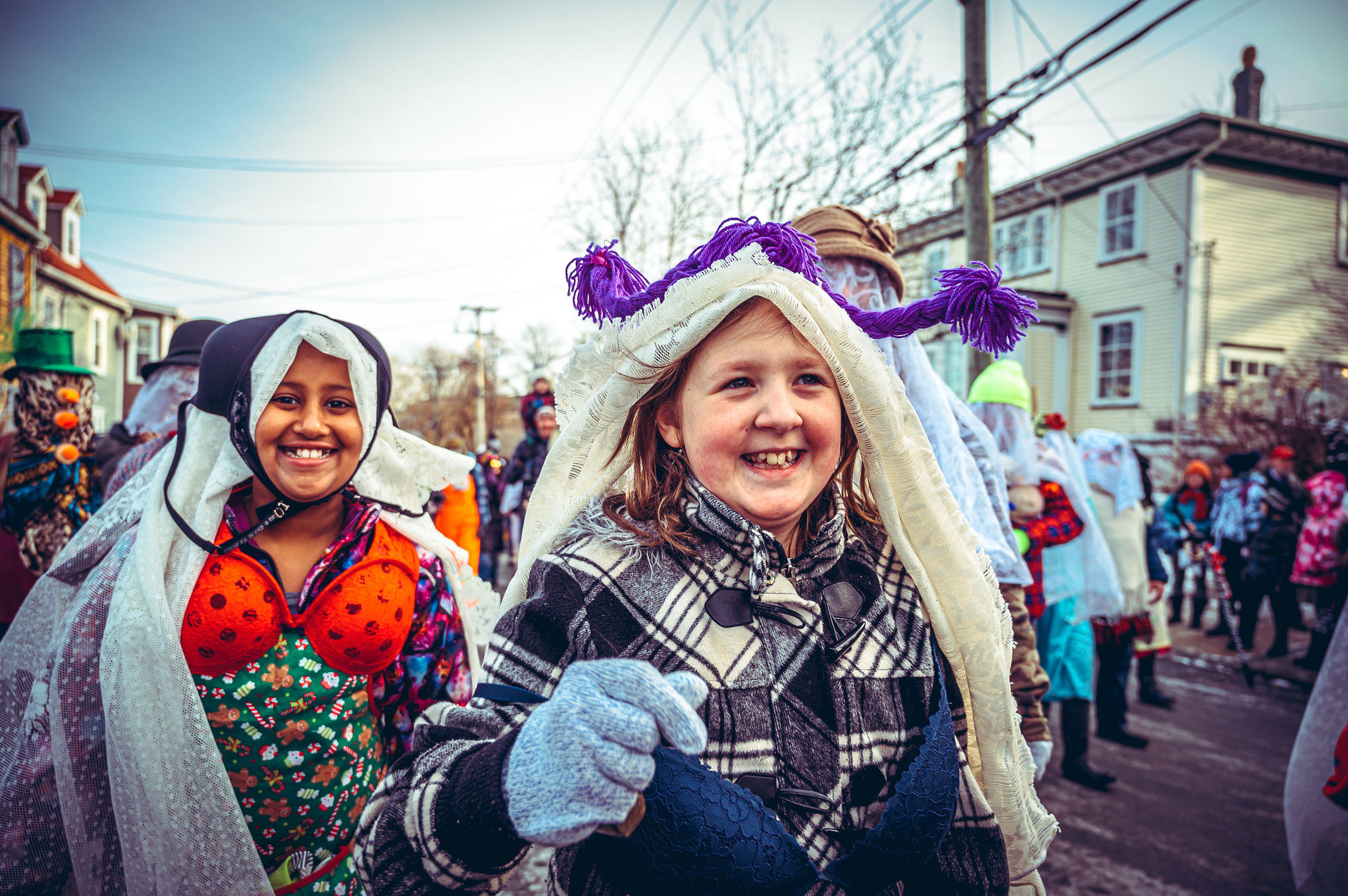 Every year since 2009, the St. John's community has come together for fun and foolishness at the Mummer's Festival.

Mummering fell largely out of practice in the east coast province, but in 2009, a group of folklore students from Memorial University and Heritage NL gave it new life: They birthed the St. John’s Mummer’s Festival, a two-week series of workshops and holiday festivities leading up to the annual mummer’s parade.

Over the last ten years, the festival has become a well-loved tradition bringing the St. John's community together.

Changing your body shape, altering your voice and concealing your identity are all key to perfecting the practice. While just about anything goes when you’re a mummer, some choose to inhabit certain traditional characters, Barrett says.

The hobby horse is a classic choice, in which mummers cover themselves in a sheet attached to an intimidating fake horse head propped atop a pole. These puppet-style costumes, designed to be creepy, have deep roots in Newfoundland and Labrador, with folklorists saying they’ve been a key part of the mummering tradition for centuries. 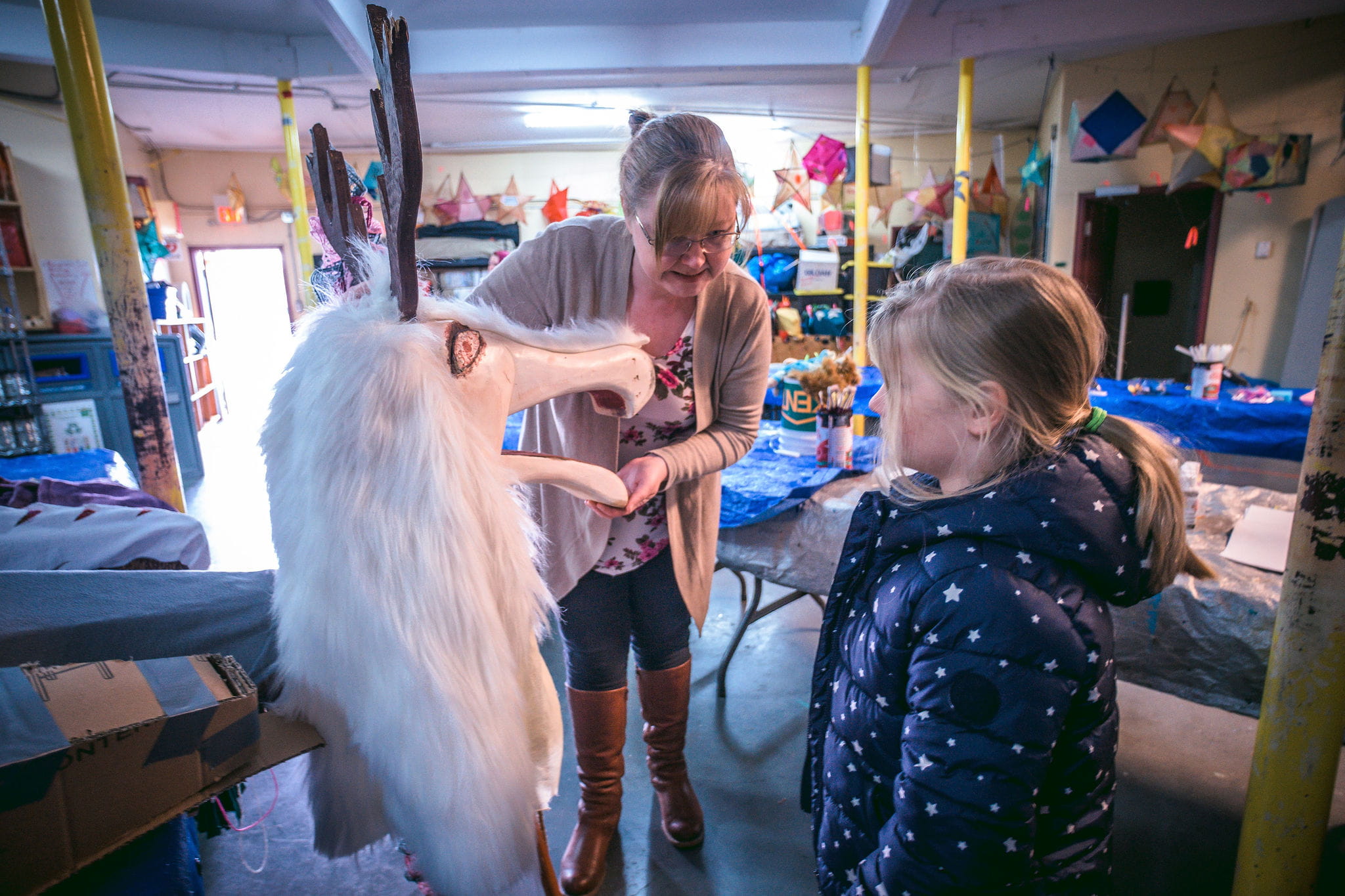 Andrea O'Brian leads hobby horse-making workshops every year as part of the Mummer's Festival, as a way of keeping the age-old costume tradition alive.

But when Andrea O’Brien, registrar of historic places at Heritage NL and member of the Mummer’s Festival board of directors, was organizing the first iteration of the festival in 2009, the hobby horse had lost its popularity.

O’Brien, who holds a masters in folklore from Memorial University, grew up in Cape Broyle hearing stories of the hobby horse and its antics during the Christmas season – a well-known part of her community’s mummering tradition for decades.

“The oldest hobby horses were often animal skulls,” she says. “Later they were made of wood, or heavy Styrofoam covered with fake black fur. There’d be ping-pongs for eyeballs and a mouth that snapped open and shut on a hinge. Years ago, an animal hide was sometimes draped over the carrier to form the horse’s body. More recently, old blankets are used.” 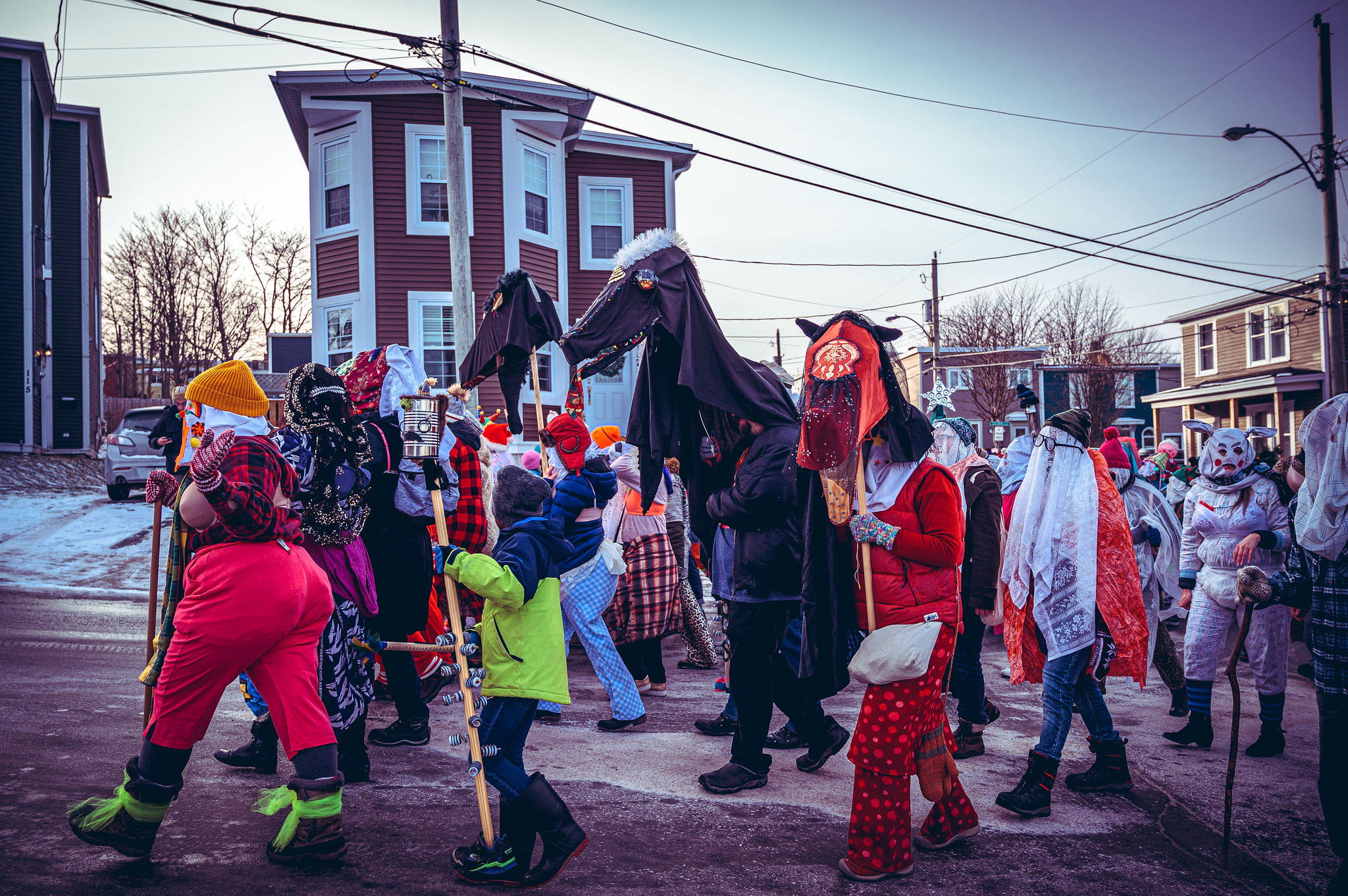 Hobby horse costumes require mummers to cover themselves with sheets and hold a fake horse head propped up by a pole.

“Traditionally, they’d enter a house ... and (immediately) turn the lights off,” she says of hobby horses pulling pranks. “One mummer I interviewed told me, ‘The old horse would keep snapping at the children so they wouldn’t get too close and figure out who was underneath the costume.’

For other Newfoundlanders, like Colliers writer and photographer Dennis Flynn, the mummering season involves parading from door to door holding a dead wren. A tradition that made its way from Ireland and England in the 1800s, The Wren is a practice similar to mummering that takes place on St. Stephen’s Day – also known as Boxing Day – in which young boys hunt for small birds, carry them around to their neighbours and collect money for their ‘funerals.’

It’s a tradition rooted in folklore in the province: Sailors once considered wren feathers to be lucky and a ward against drowning, Flynn says. According to ancient tales, the wren was once considered ‘king of the birds.’

“It could fly the highest by flying under the eagle’s wings, and when the eagle would reach its highest point, the wren would fly a foot higher. So, he won by being clever or through trickery,” Flynn says. 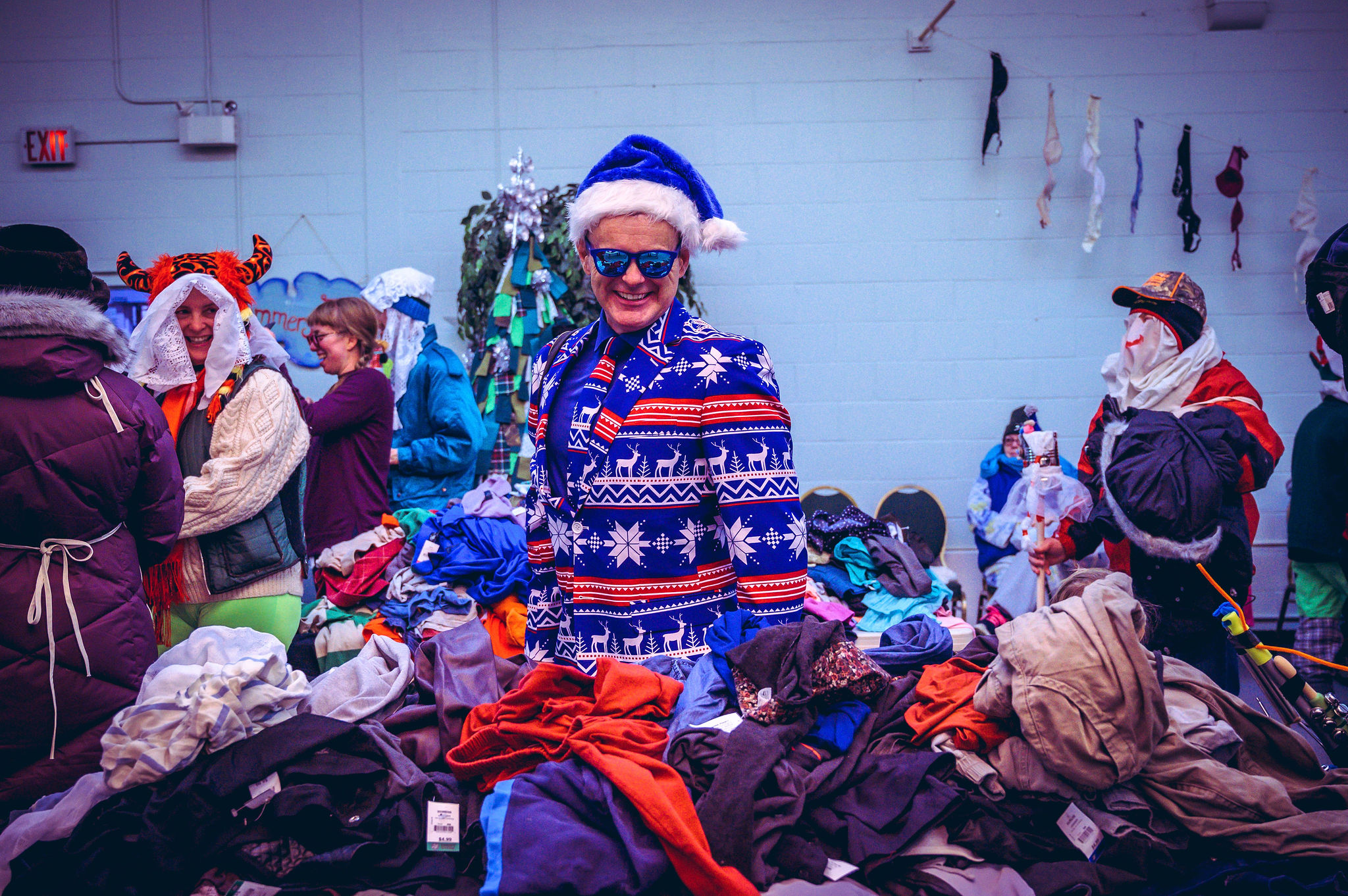 Colliers' Dennis Flynn grew up participating in The Wren, another practice associated with the mummering season in which boys go from house to house holding a fake wren, asking for change.

He chuckles, promising that no birds were harmed in his family’s version of The Wren. “We went with an effigy – we’d get a stick and make up a little cardboard wren, and we’d carry it around and say the little poem and folks would give you some Christmas candy or cake, or a bit of syrup, and they might give you a quarter.”

Despite regional distinctions in practices, there’s one cultural entity that’s equally beloved across all parts of the province: The Mummer’s Song. Penned in 1983 by Bud Davidge, it’s become Newfoundland and Labrador’s unofficial mummering anthem, and is often sung during the parade and other festivities around the holidays.

Davidge, who grew up in Fortune Bay, says song and dance were a central part of his experiences mummering as a child.

“Sometimes people carried an accordion with them, and often there’d be instruments in the houses,” he says. “Nowadays, they’ll be singing our song.”

Though it now has a more recognizable name, the song was originally titled Any Mummers ‘Lowed In? – the salutation used when approaching someone’s door. 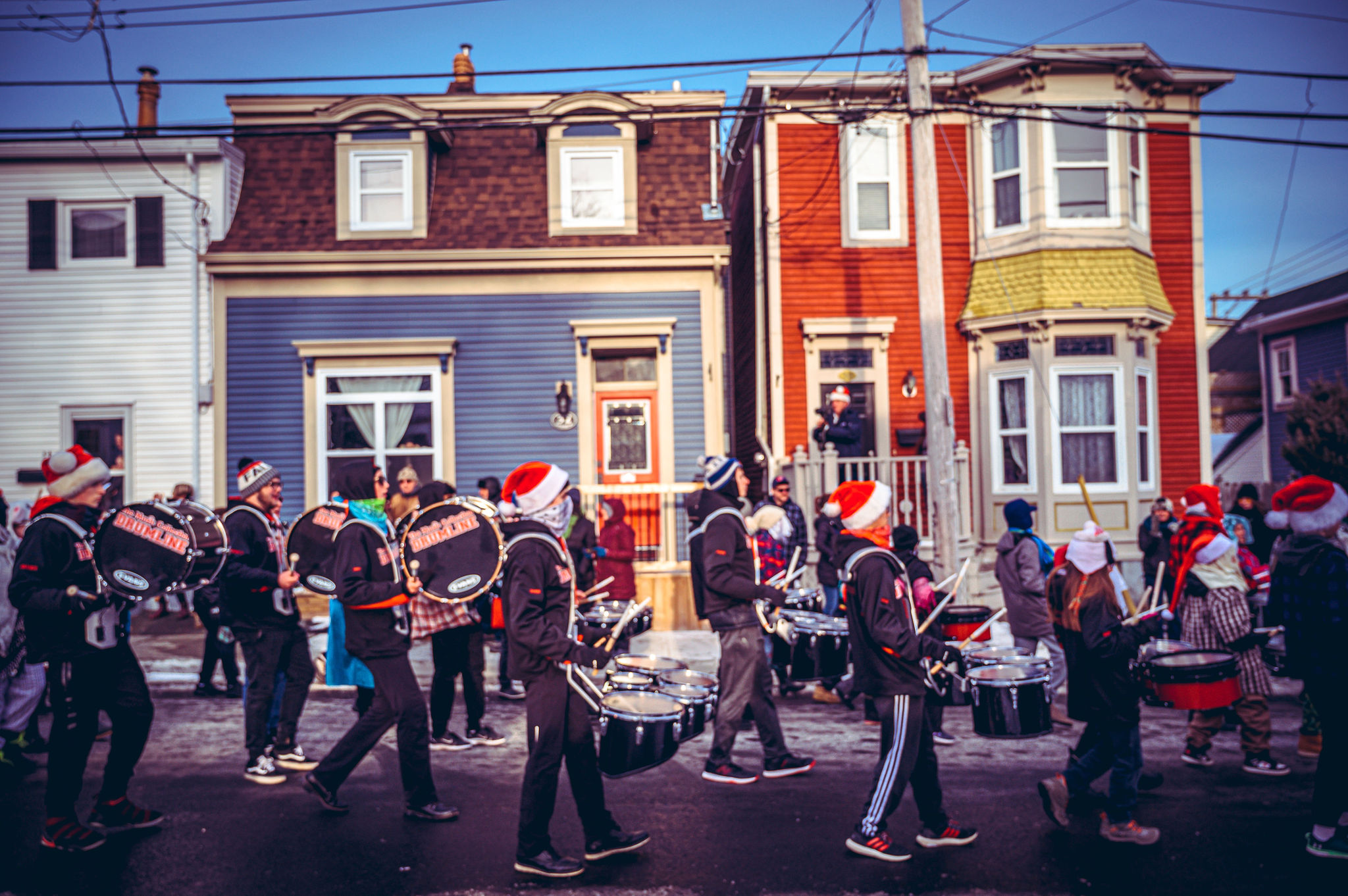 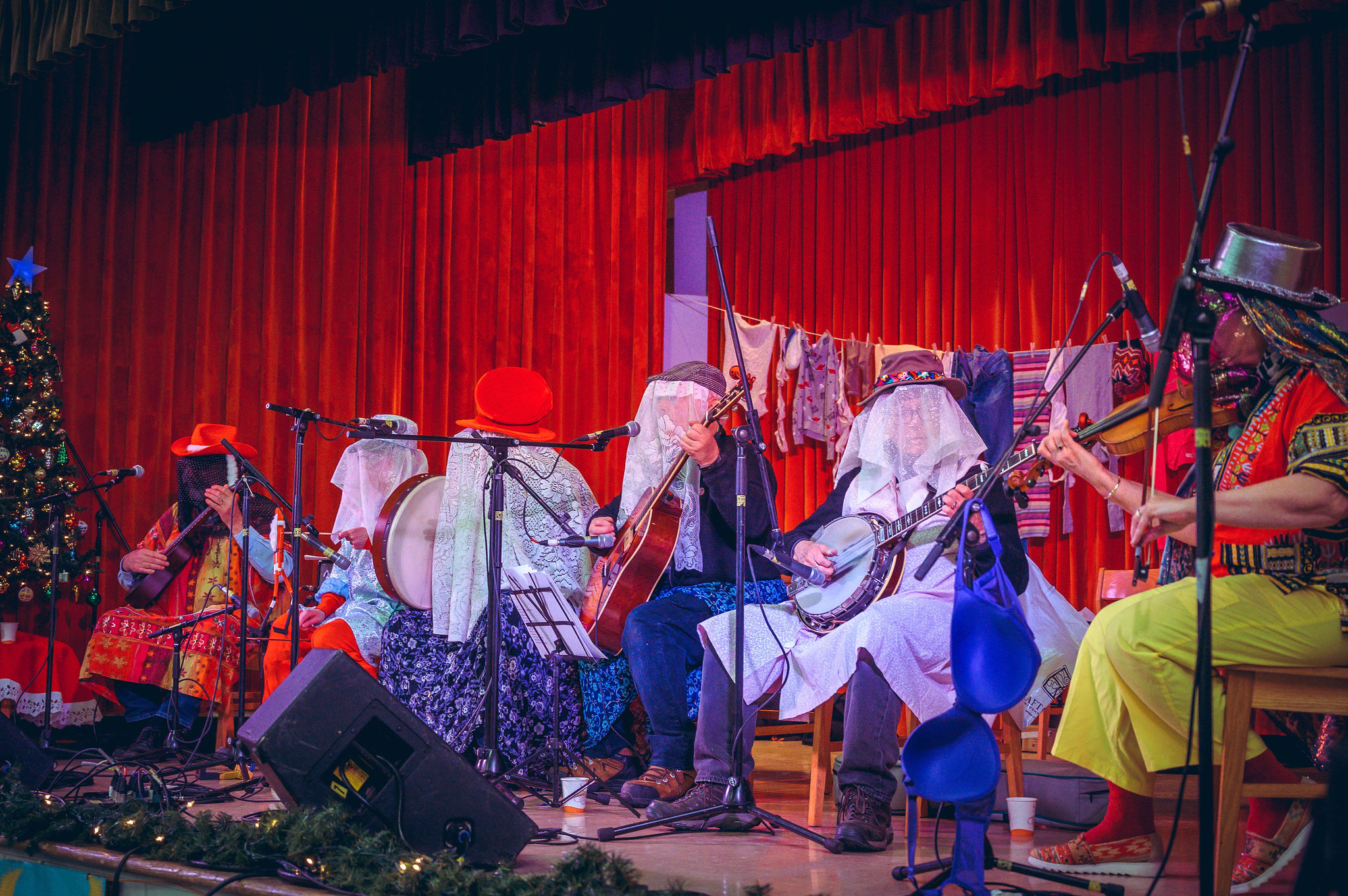 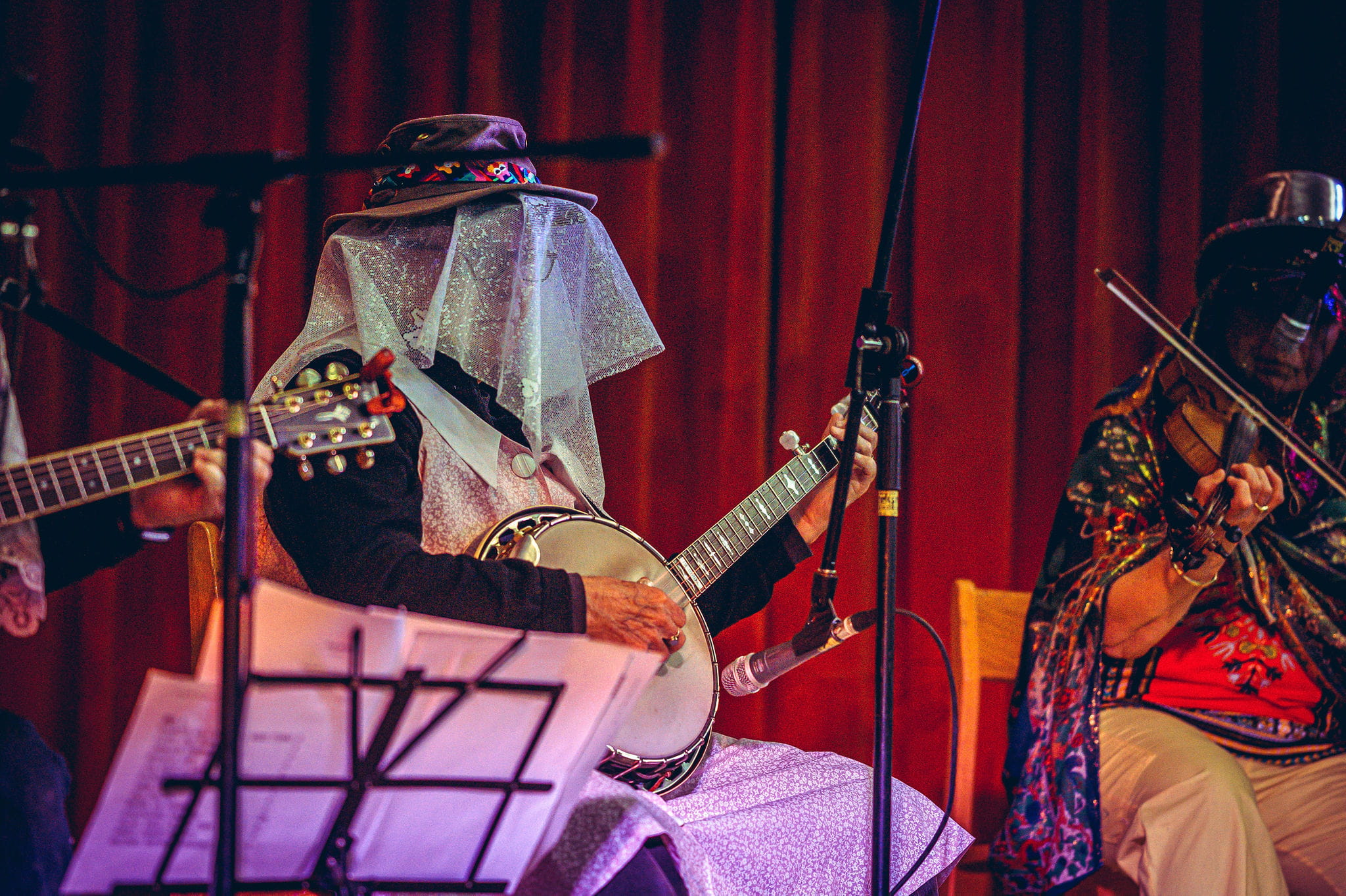 Song and dance are a key part of the mummering tradition: The Mummer's Song is perhaps the most popular tune sung during the season, penned by Bud Davidge in 1983.

“I’d do it with this ingressive voice, which is breathing in as you speak, sort of like Inuit throat singing style,” he laughs. “Part of mummering is disguising your voice and speaking that way, you know.”

The tune has garnered such fame within the province that it’s been turned into a children’s book, a musical snow globe and a hip-hop song by local rap group Mummers With Attitude in 2014.

“That was the wackiest thing, I think,” Davidge says. “Every year I say to the wife, ‘I wonder what it’ll be this year?’ There’s always something new.”

That creativity permeates throughout the age-old tradition that brings Newfoundlanders together every year. You might see people of all ages sporting bras bedazzled with rhinestones, lamp shades worn as hats, swimming goggles used for masks and mini disco balls used as eyes on a hobby horse. But when you’re a mummer, you’re just in it for togetherness, merriment and a whole lot of foolishness.